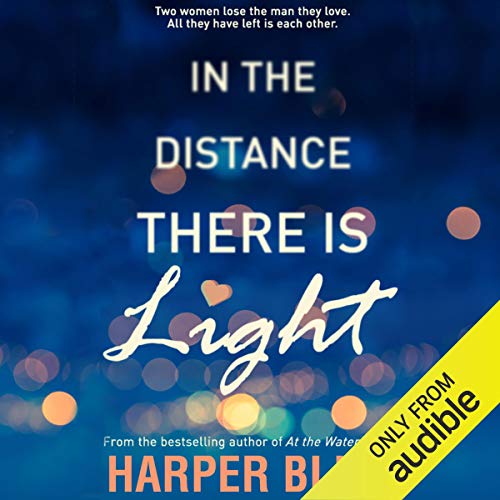 In the Distance There Is Light

Written by: Harper Bliss
Narrated by: Charlotte North
Try for $0.00

Two women lose the man they love. All they have left is each other.

Sophie's life is turned upside down when her partner, Ian, dies in a tragic accident. The only one who can understand her devastation is Ian's stepmother, Dolores. Together, they try to make sense of their loss and rebuild their shattered lives. While their shared grief brings them closer, it also takes their relationship in an unexpected direction. Where does sorrow end and romance begin? Or has Ian's death blurred the lines too much?

If you love deeply emotional lesbian romance with a twinge of controversy, don't miss this intense but hopeful novel by chart-topper Harper Bliss.

What listeners say about In the Distance There Is Light

I've been in a frenzy of lesbian audiobooks lately and I've listen to quite a respectable amount, I can say I acknowledged the concept of the "formula" rather fast, but I found Harper Bliss books and tried them out anyway. And I can safely say that from all the other author's formula, H B has the most repetitive and almost cynical one. Every book repeats itself so explicitly that even makes you think if is not it the same book with different names, I memorized it in only 4 books I've listened to the date: they're an unconventional couple who meet and there is sexual tension, before anything could even develop further they're already confessing to one another, then they have sex once or twice, after this comes the angst usually at hands of a third part who doesn't approve, they fight, they made up, the third part change their minds everything works out, one of them buys the other a strap-on (obviously) they have sex again but kinda lose their virginities? because penises and all that jazz, then happy ever after.
This is beyond dissapointing, I wasn't so against the formula with other authors because they were at least trying to vary a bit, use creativity (not only with the unconventional couple but with the whole handing of the story) but Harper Bliss apparently runs out of inspiration in the third chapter, which is just sad because they are specially good, they have talent, they can make things hundreds of times better if they only want, but instead choose this easy path which honestly? is disrespectful for us, the buyers who supports this authors.
Last, the sex scenes couldn't be more boring if they try, you can see that before the strap-on (that always makes its way to every book) the sex is mechanical, like a small reflection of the formula here: rub this, lick that, two fingers and they go to sleep. I like to think real lesbians are the ones who write and create those stories but even if they are is so narrow and tasteless, you can not feel anything by listening to it, it's almost like hearing someone baking a cookie, then when the strap-on arrives, the sex according to them is mind shattering (but it's not even described as such, if anything is just a heterosexual encounter with a plastic penis) and both of them act like they haven't been really having sex until then which is a bit weird, considering real lesbians don't rely that much in toys and specially not strap-on (that doesn't vibrate, doesn't rotate, doesn't feel good for both of them) so why? why write every single time about a sex practice that isn't even that much used and loved by lesbians? I apologise if I sound judgemental but I do really wonder and think a situation of a baby lesbian reading one of Harper Bliss books to guide herself through lesbian sex and finding out she has to buy this magnificent, life changing dildo with a lot of hard to figure out straps attached, and goes to have sex with it only to find how hard it is to even keep a ungratifying rhythm that will make you orgasm, and gives up after 20 mins of useless and repetitive motions and thinks that the bigger older lesbian in the book lied to her, and it almost wanna makes me cry.
I totally went in a rumble here, but even if I sound salty I'm not really a hater and all I really want is to listen to good lesbian love stories and this kinda got in my way, so if the author reads this, please don't take it as an attack as it is an opinion and a wishful thinking of better audiobooks to listen to, you probably know there aren't many out there so it's pretty sad to see all this wasted potential.
My best wishes to you. J.

This is a very good book

This is the second time I've read this book. the first time, I was shocked, kinda weirded out, shy, and feeling uneasy.
But as I read it I begin to underst and that love connections happens when we least expect it. I was very impressed with the written. The story line was incredibly well done, as ALL Harper Bliss's books. I found it to be heartwarming, sad, funny, full range of emotions which I felt every moment I was in their world.
I have to say the narration was excellent, she made each character just pop out of the story.
If you have read this book or not, the audio version is a must own...

In the Distance There is Light

Harper Bliss truly is an excellent writer, and she continues to prove it with In The Distance. I can imagine many readers being very uncomfortable with the way the relationship between Dolores and Sophie develops, and may even describe it as codependent and unhealthy, but in the end, they are both adults. They don't deny that their loss is a catalyst for the change in their relationship, and that society isn't going to necessarily be comfortable with that change. That's acknowledged in the reaction of Dolores' friend when she learns that Dolores and Sophie are lovers. Sometimes love just clicks prettily, and other times it's just ugly and dirty, but either way, love happens the way it happens. I, for one, am glad that Ms. Bliss is not afraid to get her hands grubby by going after the story lines no one else wants to think about.
I switched between the e-book and the audiobook version of In the Distance. The narrator did an excellent job of conveying emotion and differentiating between characters.

I'm a die hard HB fan but I just could not connect with the characters in this book. I found myself wanting to stop about a third of the way thru, but I pushed on and by the end, I questioned why I did. The writing was good, the romance was surprisingly good. But the subject matter and constant wallowing just made me depressed. Overall, it was a decent enough book but just not for me.

This is way different from what Harper usually writes, but she has solidified her true talent as a writer!!! I loved this taboo story of love, but the circumstances made sense to me. Love prevailed through the ca
ompartmentalization and judgement often forced upon situations where we lack understanding. Harper did a wonderful job of making room for their story to be told and that's critical. At the end of the day, two women fell in love with each other.....so the reason why or how doesn't really matter. Excellent Harper....excellent!!😉😘

I absolutely love Charlotte North’s narration. She did such a great job bringing the characters to life. I’m going to look up some of the other books she’s narrated for sure.

The story was pretty good. My issue was that I was never fully invested in Dolores and Sophie’s relationship. I don’t feel like it ever really passed the comforting each other phase. I don’t think Sophie ever really handled her grief and when she tried to she just got sucked back in by Dolores.

Another issue I had was that we don’t find out the actual age gap until roughly 50% in and for no apparent reason other than it’s just not mentioned. I found myself trying to figure it out while listening because I kept picturing a 25 year old girl falling for a 70 year old woman. I think part of that is because her name is Dolores and I associate that with someone more my grandmother’s age. For the record, Sophie is 30 and Dolores is 56, which was a bit too much of a spread for me. Furthermore, we never get descriptions of either woman’s appearance. Eventually we find out that Dolores has blue eyes and short blonde hair, but that’s where it ends. Again, that didn’t really help with the extreme age gap when I’m picturing someone much older.

I also didn’t like how Ian was still so present in their relationship even towards the end. They’re having sex and Sophie is comparing how different things feel between each of them. I think that also contributed to my feeling that they were just together for comfort.

What I did like about it was how different the story was from anything I’d ever read before. It was very daring to take on this subject matter because it is SO taboo. So kudos to Ms Bliss for undertaking it!

In the Distance There is Light

Harper Bliss approaches a taboo romance with honesty, tenderness, and love. The book illustrates that love happens. What the world says about a relationship between two consenting adults should not matter. It does, and we see how Delores and Sophie have been influenced by society's perception of relationships and love. The path is true. Nothing thrown our way is not based on what could really happen. I love the book. I loved all the characters. I will reread this one. Charlotte North's narration is wonderful.

this is a really different take on getting over a love one. I get it and just wow.... wow

I rarely write any reviews, but this book is soooooo amazing! The story is amazing & new.. I never thought that I would like yet, but I ended up loving it & taking it as one of my favorites.
The narrator made me soooo involved that I skipped sleep just to finish the book. She is above wonderful as she brought the feelings into life.. made me feel every word & emotion as if I was one of the characters.
All in all, an AMAZING listen.
I'm so sad it ended, as it really was amazing.

A very moving story which was written with care. I know grief is a delicate subject in it self and then add in the growing relationship between Sophie and Dolores. Harper Bliss handled it beautifully and I felt so touched by this story. It was read by Charlotte North and she was amazing. This is one book everyone should experience.