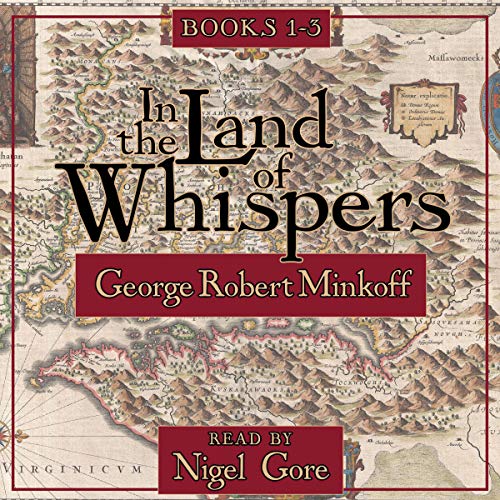 In the Land of Whispers Books 1-3

In the Land of Whispers Books 1-3

Brilliantly read by Nigel Gore, this audiobook joins together George Robert Minkoff’s three critically acclaimed historical novels about the founding of the first English colony at Jamestown - The Weight of Smoke, The Dragons of the Storm, and The Leaves of Fate. The recording is followed by a fascinating conversation with George Minkoff, Nigel Gore, and co-producer Alison Larkin.

The novels are visionary epics chronicling lesser-known aspects of the Elizabethan world, including the importance of alchemy to Queen Elizabeth and her court. The canvas is vast, intertwining the life of John Smith, as a narrator, with that of Sir Francis Drake, the great Elizabethan explorer, whose feats 30 years beforehand inspired Queen Elizabeth, and later King James, to dream of an English Empire.

The novels depict the reality of the people who braved great unknowns - treacherous seas, new territory, indigenous populations - to bring with them a utopian ideal that was ultimately shattered on the altar of English custom.

Certainly a monumental undertaking. But 57 hours of dreary monotone in an affected accent was a bit difficult to stay with. There is no real story. More or less an odd re-telling of well worn history. There is little of the historical novel here. The stuff of the novel that makes history sing is missing. It is confused by out of place philosophical arguments that have little to do with the story and are argued by simple folk in effete upperclass English.