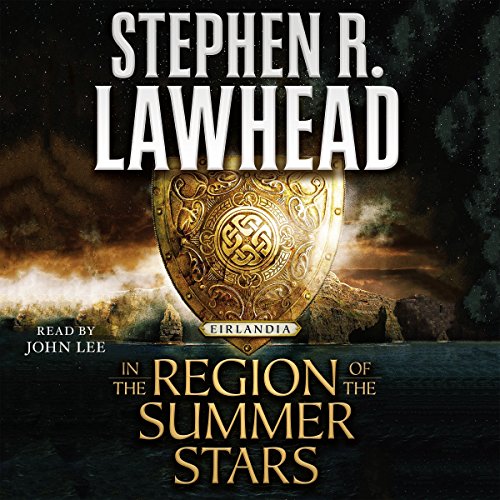 In the Region of the Summer Stars

In the Region of the Summer Stars is a new Celtic fantasy audiobook from Stephen R. Lawhead, critically-acclaimed author of the Pendragon Cycle.

Ravaged by barbarian Scálda forces, the last hope for Eirlandia lies with the island’s warring tribes.

Wrongly cast out of his tribe, Conor, the first-born son of the Celtic king, embarks on a dangerous mission to prove his innocence.

What he discovers will change Eirlandia forever. For the Scálda have captured the mystical Fae to use as an ultimate weapon.

And Conor’s own people have joined in the invasion.

What listeners say about In the Region of the Summer Stars

This is a perfect bedtime story for adults that love European history and intriguing characters of integrity and humor. The audio helped greatly with the pronunciation of the places and people. I listened as I read the Kindle version.,I can’t wait to start the next book in this series. It’s refreshing to focus on a world of depth, truth, intelligence, and kindness at a time when US politics are enough to make a believer physically ill.

I love Stephen Lawhead! I have been reading and rereading his books for years! This book did not disappoint! Read, and imagine life in Eirlandia!

Lawhead is just a master of Celtic fantasy!

Lawhead just doesn't disappoint! He gives us a brazen protagonist, elven charm, druidic lore, and a mystery to solve... and manages to keep the action going from the beginning! He weaves a story beautifully!
The narration was a bit heavier than I typically prefer... It wasn't bad, just not the lilting brogue I expect from a Celtic fantasy. Still, it won't keep me from the next book in the series, which I have already pre-ordered.

The story takes a while to get interesting; about halfway through I became more intrigued. The Scottish accent was too strong and distracting.

I wasn't sure what to think at first, having just finished the pendragon series of books also by Lawhead and become so attached to those characters I knew, but the narrator's talent and the authenticity his accent gives to the tale kept me plugged in during the developing stages where you don't really know enough about the new characters to be attached to them yet. Not far in to the story things get exciting and I was hooked. I think branching out from Britain mythology and delving into a tale of the green Isle is a great direction for Lawhead to have gone. Two thumbs up.

The story craft and adventure and values. I just loved it. And as a man, it was so good for my soul.

A first-rate performance of a first-rate Celtic fantasy tale. If you have read or listened to any Stephen Lawhead previously you should definitely partake of this offering. Though not as large as some of his previous epics it is nonetheless extremely well done and compelling and enjoyable. What else could you ask for?

The book didn't end...it just stopped. It was liking getting a section of the main characters life without an ending.

Unexpected twists and turns take you through an enjoyable Irish story of Viking invasion and Fairy and Druids. Definitely seeing up a series.