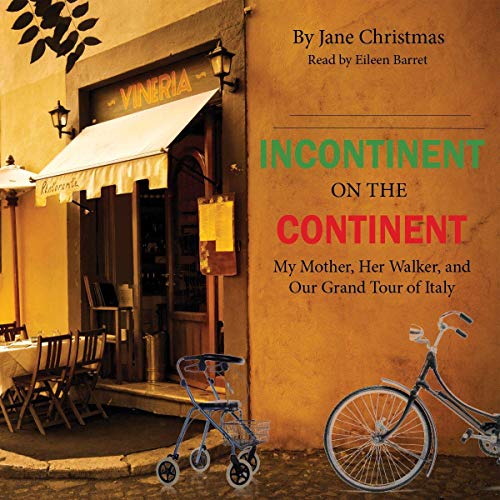 Incontinent on the Continent

Written by: Jane Christmas
Narrated by: Eileen Barrett
Try for $0.00

In this travelogue of self-discovery, Jane Christmas brings her wickedly irreverent style to a new mother-daughter experience. Since the beginning of time, mothers and daughters have had notoriously fraught relationships. "Show me a mother who says she has a good or great relationship with her daughter," Jane Christmas writes, "and I'll show you a daughter who is in therapy trying to understand how it all went so horribly wrong."

To smooth over five decades of constant clashing, Christmas takes her arthritic, incontinent, and domineering mother, Valeria - a cross between Queen Victoria and Hyacinth Bucket of the British comedy Keeping Up Appearances - on a tour of Italy. Neither has been to Italy before, but both are fans of ancient art, architecture, and history. Will gazing at the fruits of the Italian Renaissance be enough to spark a renaissance in their relationship?

As they wander along the winding Amalfi Coast, traverse St. Peter's Square in Rome, and sample the wines of Tuscany - walkers, biscuits, shawls, and medications in tow - they revisit the bickering and bitterness of years past and reassess who they are and how they might reconcile their differences.

Unflinching and frequently hilarious, Incontinent on the Continent will speak to all women who have tried to make friends with their mothers.

"The personal journey she shares is one with which more and more of us are dealing as all our lives move, with welcome and enriching detours, down their one-way streets." ( Globe and Mail)
"I'm certainly glad we had the trip. The book shows we had a wonderful time. It was good. It's no fun with a walker. The spirit is willing, but the flesh is weak." ( Toronto Star)

What listeners say about Incontinent on the Continent

This book was all about entitlement. Jane is a very whiny, hard to please, negative person. As someone who travels with her elderly parents, I understand their limitations and my expectations as to how the journey will go. I also prepare ahead of time as much as possible to make sure navigation, accessibility and accommodations are suitable for my parents.

I found the protagonist irritable and constantly whining! I’ve had to stop more than once to take a break from the negativity of her complaining. She even gripes about Italy the entire time...seriously has she even been tot he country?! It’s no where near as horrendous a place as she makes it out to be, her depiction is almost criminal!

Definitely not my cup of tea!

This book was a disappointment. It wasn’t funny; it just came across as a whiny rant. Too bad because the subject matter had the potential to be very funny!

I also did not like the narrator – her Italian sounded Spanish.

Would you try another book from Jane Christmas and/or Eileen Barrett?

What was most disappointing about Jane Christmas’s story?

It simply wasn't interesting, and the humor was literally the same thing, page after page, chapter after chapter, until it became annoying rather than pleasurable.

Would you be willing to try another one of Eileen Barrett’s performances?

The narrator was decent enough, it was the material she was given that was the issue.

What character would you cut from Incontinent on the Continent?

This just seems completely insincere, as if the author decided when she and her mother had decided on this trip that she'd take good notes and turn it into a book of some kind after in the hopes of making some money and paying for the trip. The problem is the author, her mother, and the people she meets just aren't interesting, their escapades aren't interesting, the humor isn't interesting or funny, and it's just the same thing over and over and over again, ad nauseum.

As I was preparing to visit Italy for the trip of a lifetime, I started listening to Italian stories, this was depressing, whiny, complaining about Italians, made me not want to visit. I couldn’t even finish it! Waste of money!