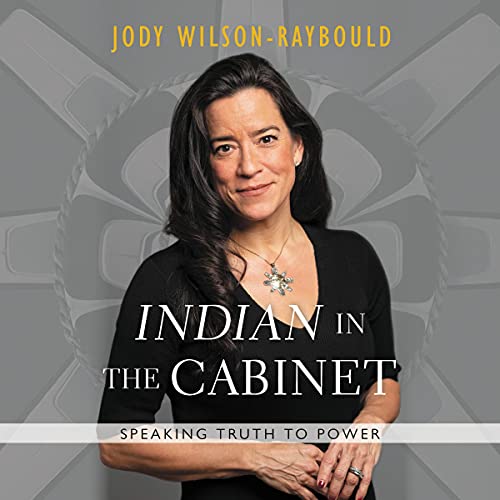 "Indian" in the Cabinet

A compelling political memoir of leadership and speaking truth to power by one of the most inspiring women of her generation.

Jody Wilson-Raybould was raised to be a leader. Inspired by the example of her grandmother, who persevered throughout her life to keep alive the governing traditions of her people, and raised as the daughter of a hereditary chief and Indigenous leader, Wilson-Raybould always knew she would take on leadership roles and responsibilities. She never anticipated, however, that those roles would lead to a journey from her home community of We Wai Kai in British Columbia to Ottawa as Canada’s first Indigenous minister of justice and attorney general in the Cabinet of then newly elected prime minister, Justin Trudeau.

Wilson-Raybould’s experience in Trudeau’s Cabinet reveals important lessons about how we must continue to strengthen our political institutions and culture, and the changes we must make to meet challenges such as racial justice and climate change. As her initial optimism about the possibilities of enacting change while in Cabinet shifted to struggles over inclusivity, deficiencies of political will, and concerns about adherence to core principles of our democracy, Wilson-Raybould stood on principle and, ultimately, resigned. In standing her personal and professional ground and telling the truth in front of the nation, Wilson-Raybould demonstrated the need for greater independence and less partisanship in how we govern.

“Indian” in the Cabinet: Speaking Truth to Power is the story of why Wilson-Raybould got into federal politics, her experience as an Indigenous leader sitting around the Cabinet table, her proudest achievements, the very public SNC-Lavalin affair, and how she got out and moved forward. Now sitting as an independent member in Parliament, Wilson-Raybould believes there is a better way to govern and a better way for politics - one that will make a better country for all.

What listeners say about "Indian" in the Cabinet

Interesting but not revelatory

Interesting but nothing ground breaking. JT becoming leader of the Liberals was a clear indication of their hunger for power. His privileged attitude was clear from the start and enhanced by the Liberal party. That he did little on Indigenous issues, not a shock. JWR does not mention JT's comments about "sheds for canoes" in 2017 and appeared to have no comment on it at the time or support Romeo Saganash in calling out the PM.

Honestly I respect JWR for what she went through and speaking the truth. However at the end of the day aside from the broader issue of the Indian Act she seems fairly deaf to the concerns of indigenous peoples outside of BC. I can't help but feel that until JT's corruption effected her directly she was a clapping seal like the rest.

What a hero and brave soul. Keep up the good fight! Well written, good luck with what ever direction you go from here!

This is an astonishing depiction of the happenings around Jody's time in politics and cabinet. She also opens a window into her life so listeners gain an understanding of who she is, lessons she learns and people she relies on for decisions. Her strong work ethic, commitment and vulnerability allows her audience to relate to her and appreciate her courage, love and compassion she has for all Canadians.

Incredible book - much more than SNC

I was listening to this book out of a sense of responsibility; because I believe in standing up and the breakdown of partisan actions that get in the way of true democracy.
I somehow expected it to be a summary of SNC from JWR’s perspective and that I would feel a need to hear JT’s version of the events.
However, this book is not about us vs them. Itd JWR’s story of growth, leadership and values. The story of First Nation women and the battles they have to fight for equity. It is a story of misogyny, politics, and becoming aware of our broken system. It’s a story of self reflection, relationships, integrity and pain.
It’s a story of change and it provides me with loads of hope for our future.
It inspires me to continue my own walk of speaking my truth and being confident in what I believe to be right.
Thanks JWR, for leaving a greet legacy to all Canadians.

I actually took the time to listen to chapters more than once. It was a detailed dive into how our government operates, how cover ups can be facilitated by the status quo in Ottawa. The chapters on SNC confirmed much of what I have seen in the industry and with government. But more so, the entire book laid out how hard JWR fought to maintain the rule of law in both the Canadian system, and the Indigenous system.

It should be required reading for anyone that asks the question - why has Canada made little progress on Reconciliation?

I really enjoyed listening to Jody 💖

Jody reads the book and tells the story from her personal experiences. She tells of her life growing up on the reserve and talks her influencer (grandmother), 💞
Her hopes of making change.
When you listen to the book you can hear her voice change with her emotions. 💞
She does make a comparison of Justin's leadership style to Stephen Harper.
She discussed everything with compassion 💜

Truth to power and rule of law fundamental

Jody Wilson-Raybould's believe in our Canadian government is idealistic but hopeful. Her take on partisanship, unelected PMO powerhouse making government decisions and a party's need to hold on to power above all else is enlightening and reaffirming of what we have seen happening in Canadian Federal politics for too long.

This is her personal accounting of her time as a MP in Trudeau's gov't and the scandals.

Jody identifies the issues facing Canada regarding the existing constitution, the culture of diminishment and the desperate need to revamp the political system to enhance the lives of all Canadians.

Very well written book by an a very strong , intelligent, and fierce woman ! Her integrity is inspiring

Thank you for your integrity!

Thank you for your integrity, we certainly need more of that in our politics!
Not surprised with the "lack of" in our prime minister

A fabulous listen. My accolades to Ms Wilson-Raybould for informing us all about the inner workings of Canada’s Liberal government