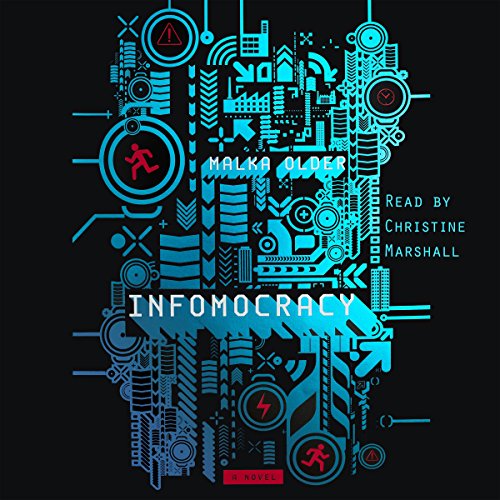 Written by: Malka Older
Narrated by: Christine Marshall
Try for $0.00

It's been 20 years and two election cycles since Information, a powerful search engine monopoly, pioneered the switch from warring nation-states to global microdemocracy. The corporate coalition party Heritage has won the last two elections. With another election on the horizon, the Supermajority is in tight contention, and everything's on the line.

With power comes corruption. For Ken, this is his chance to do right by the idealistic Policy1st party and get a steady job in the big leagues. For Domaine, the election represents another staging ground in his ongoing struggle against the pax democratica. For Mishima, a dangerous Information operative, the whole situation is a puzzle: How do you keep the wheels running on the biggest political experiment of all time when so many have so much to gain?

"A fast-paced, post-cyberpunk political thriller.... If you always wanted to put The West Wing in a particle accelerator with Snow Crash to see what would happen, read this book." (Max Gladstone, author of Last First Snow
"Smart, ambitious, bursting with provocative extrapolations, Infomocracy is the big-data-big-ideas-techno-analytical-microdemoglobal-post-everything political thriller we've been waiting for." (Ken Liu, author of The Grace of Kings)
"In the mid-21st century, your biggest threat isn't Artificial Intelligence - it's other people. Yet the passionate, partisan, political and ultimately fallible men and women fighting for their beliefs are also Infomocracy's greatest hope. An inspiring book about what we frail humans could still achieve, if we learn to work together." (Karl Schroeder, author of Lockstep and the Virga saga)

What listeners say about Infomocracy

At heart, this novel is a political thriller

Infomocracy by Malka Ann Older is a science fiction and political thriller set in the future where an entity, called Information, controls all information and search engines. In this world, government has transitioned from nations to micro-democracies, with many different kinds of governance, corporate and otherwise, over small population Centenals. The story follows a few different characters with intersecting paths during a turbulent election period. Ken works for a campaign, trying to elect his employer and government in different Centenals and gain a majority standing. Mishima is an operative for Information, trying to see trends in the data and keep the spread of information as clean of corruption as possible. As the election season progresses, these two characters’ paths intersect many times as potential corruption slowly comes to light, creating a storm for the information and political world.

At heart, this novel is a political thriller, but it’s filled with technological advances that fit a science fiction story. While the storyline may seem confusing or dense at first, ultimately, I found it incredibly thought-provoking. The characters could have been more complex. In addition to the two main characters, the story is also told from the perspective to 3-4 additional characters. But the real focus of the story is in the world building, the dynamic progression of the election season, and how the different players interact with the changing political landscape. The details in the world building are fantastic and the characters’ brief sojourns in different Centenals bring each into clear and fascinating focus. and the supporting characters, residing in different Centenals and around the world, further fill up the story with rich detail and complexity. The Information entity and how it is incorporated into the daily lives of the people was especially fascinating and reminiscent of reality. The story-line is fast-paced, action-packed, and highly unique. I have never read a novel like this one and I really enjoyed it.

The narration by Christine Marshall was fantastic.  Her fast pacing voicing was perhaps a little challenging to decipher on occasion, but the pace of the story calls for fast speech. Ultimately, she did a great job. The production quality was good as well. I would recommend this novel to anyone who enjoys fast paced political thrillers and science fiction.

Audiobook was purchased for review by ABR.

I found the story very engaging and enjoyed it a lot, however I never could quite get immersed in it, mostly because of the narrator's constant mispronunciation of the Japanese names (which make up about half of the characters), as well as fairly poor attempts at various accents.

The politic system of the future?

The author likes long complicated sentences and the narrator skims through the book quickly and not always with the intonation spot on. That was a bad combo. I had to really concentrate all the time.

If you thought current elections are bad...

Malka Older's Infomocracy: A Novel presents a dystopic vision of the future where all the problems with current political elections are combined with the online convenience of voting and the world has somehow been transformed into one giant entity with continuously changing gerrymandered districts. The premise is a world with dozens to hundreds of political parties and corporate governors who vie every decade for a slice of the ruling pie. The resulting largest winner gets "supermajority" status and receives special powers. Overseeing the integrity of the exercise is group known as Information. The plot revolves around a dispersed group of individuals working this space who come to a realization that someone is "rigging" the election.

The sci-fi elements are mainly expanding digital technology and flying cars. The actual function of all this choice is never clearly articulated, nor is the origin for this societal organization. In other words, exactly how existing nations voluntarily ceded their sovereignty and what they received in exchanged is ignored. At the same time, why the planet would place the integrity of the process, selection for decadal rule to an unelected, and unsupervised entity: Information, is also a mystery. Finally, why no ones objects to a member of one political party becoming involved with the vote tampering investigation is a bit surprising. While the action is engaging, the societal structure in which events occur is nearly entirely driven by extrapolating current trends to unreasonable levels.

The narration is solid with a reasonable range of voices with good pacing and mood that aligns well with with the plot. Close attention is required as while not a complex story, the arbitrary nature of the society requires close inspection.

older takes you on a wild unforgettable ride! best book of the summer! str8 up!

Bad mixing or production? or just bad casting? Her voice is often shrill when high, and hard to understand even with good headphones. Not sure I'll try to finish it. (after messing with an equalizer) And she can't even pronounce Japanese correctly (over and over).

The story was incredibly appropriate for the 2016 election year.

it would have been nice if the narrator had looked up the names of the places in the book so she could have pronounced them properly. At this level of production quality, that is not asking too much, I would think.

The reader on this book was just awful. She read everything in a sing-song story time voice that felt off in a book aimed at people over the age of, like, five. The story itself is full of neat ideas. Some of it was a bit jumbled but I enjoyed the premise.