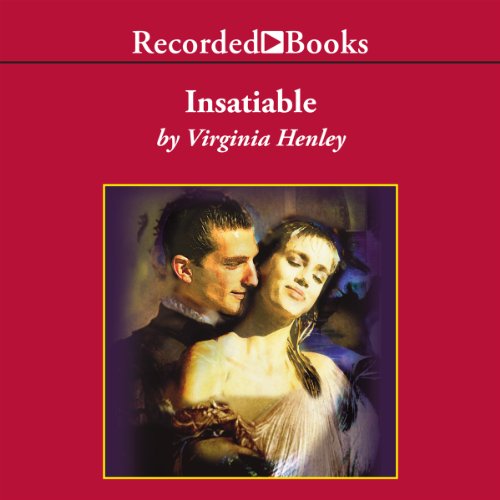 Written by: Virginia Henley
Narrated by: Jill Tanner
Try for $0.00

New York Times best-selling author Virginia Henley writes titillating romance novels. In the prim and proper days of England’s past, sexy vixen Catherine “Cat” Seton Spencer designs dresses for Queen Elizabeth. But in her spare time, she makes the rounds in London, looking to satisfy her unquenchable lust. Little does Cat know, she’s on a collision course with the roguish Patrick Hepburn, Lord Stewart of Scotland—and he means to claim her as his own.

"History is not just backdrop; invoked in key narrative threads, it keeps the plot taut and textured. Henley succeeds in creating an atmosphere of impending social cataclysm that enhances the lovers' sense of urgency and embeds their English-Scottish union in a more epochal context." ( Publishers Weekly)

What listeners say about Insatiable

wish there were more stars to give it!

this audiobook started a liitle slow, but by the 3rd chapter i was hooked, and it just kept getting better great story! as well as sexy romance ! highly recommended!

Wonderful story kept me transfixed for hours. I had forgotten about Virginia Henley books and I am so glad I had come across her again. One of many original romance authors! Please do more of our older favorite authors. Would love to hear some of Kathleen E. Woodiwiss as well.

Katherine Spencer is one note and unlikable

Maybe it's just me, but I like it when the protagonist has a little more substance and is a little flawed. Katherine Spencer's only flaw is that she's "wickedly impulsive" (eyeroll...) Her physical perfection, miniscule lady like appetite, and perfect taste in clothes is constantly brought up by both the other characters and the author to the point of annoyance. She was very one dimensional and I really didn't care what happen to her one way or another. The antagonist, Patrick Stewart was equally disinteresting to me.
There are some plot twist that had some definite potential but since the characters where so predictable and boring at that point, not even that helped much.
Also no epilogue, which I feel ties up romances quite nicely. This story just kind of ends flatly.
I will say that I enjoyed that it was set in Tudor England (early 17th century) I just left wanting.
3 stars is probably a little generous.

What made the experience of listening to Insatiable the most enjoyable?

This book was a great trip through Elizabethan England/Scotland.It begins approximately 2 years before the death of Queen Elizabeth 1.

The heroine Catherine (Cat) a Lady in waiting and dress designer to the Queen, and the hero - Patrick Hepburn son the exiled Scottish Earl of Bothwell ( who historically was a huge supporter of Mary Queen of Scots, King James' mother) They meet and initially hate each other , well, Catherine hates Hepburn. Hepburn is intrigued by the beautiful and vain Cat, but he doesn't go "ga ga" over her like everyone in the Queen's court.But Catherine can't help being draw to the 6 1/2 foot "Scots Barbarian" The story is long but it moves beautifully.

I love the descriptions of the fashions and fabrics of the period, the landscapes, the food.
It would make a great Movie!
I love books you could see being made into a movie or mini series ( but only by the BBC)

The historical/political intrigue, the characters and the dialogue

I love the narrator, her voices, accents, and tone is fantastic.My favourite of all her characterizations is King James and Maggie ( Catherine's maid and surrogate mother)

The death of a secondary character in the middle of the book, she had an impact on everyone.

I purchased this book on a BOGO special, and it's the best deal EVER. It is worth the credit on its own.Enjoy!

I am about to finish this book and I am sad. I really like this one. My favorite thing is that it moves along quickly, doesn't drag out the story line and actually has a good plot. It is one of those really corny ones, where you know what is going to happen before it does. I will look for more from this author.Narrator was great.

I love this book!

I am new to audio books. But I own this book in paperback and it is one of my favorite historical romance novels. It was different listening and I had to speed up the voice but still a great read

This is a wonderful historic romance. The narrator was fantastic! Kat was a strong women and possess plenty of reckless courage. Patrick had the urge to turn Kat over his knee and tan her hide more than once. I loved the many funny scenes.

One of my best purchases.

The characters were very real. I loved all the history and want the story to continue!

Surprisingly detailed and a splash of magic

I was really surprised with the book. When the narration started I wondered if I had tangled myself up in a dry Elizabethan book (see Wolff Hall) but the story became engaging after the initial details were laid out. Henley gives us a full picture of the characters and what their lives were like in Elizabethan England and Scotland. Her details make it so understanding this period of British history much easier for one who doesn't know much about the setting.

What I found interesting and well maintained is the little bit of magic Henley gave her male lead, Hepburn. His ability to "see" beyond the normal view doesn't take over the book and turn it into a fantasy. She uses it as a plot device but not one that takes over and forces the characters one way or another. It's a window she uses to let characters see things that allow the plot to streamline. I am very pleased with her choice to use this skill for Hepburn but even more pleased that it doesn't take over the story. She uses it sparingly and it does not pull the reader completely out of reality.

Jill Tanner's narration took just a little bit of getting used to, but after hearing the pattern of her speach it really lended itself to the story. Her ability to switch accents helped define the characters that I don't know if any other narrator would have accomplished.

In all, when looking for a really long audio book I was really pleased with this one. The story was well developed, the characters maintained their intended portrayal, and the setting was nicely described.

Would you listen to Insatiable again? Why?

I enjoyed the story line of the book very much. It took me a couple of chapters to get used to Jill Tanners' narration style, something in the way she paused at the end of a sentence. I was a bit disappointed in the ending of the book. The last chapter seemed to be rushed to me like when a high school student realizes they have the required amount of words in a report and finishes hastily.

What other book might you compare Insatiable to and why?

This is only the second audio book I've listened to. I really don't have enough to compare it to but overall I did like the book very much.

What does Jill Tanner bring to the story that you wouldn’t experience if you just read the book?

I loved the accents and different speech patterns of the different characters, made me feel almost as if I were watching a movie.