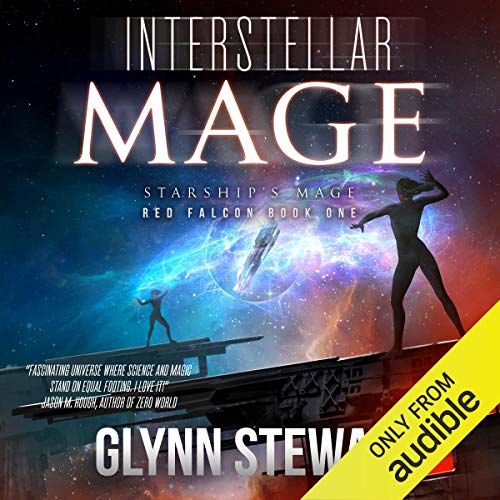 Mars destroyed his ship - but gave him a new one.

Mars drafted his Mage - for the good of humanity!

He should have known that wouldn’t be the end of it….

Captain David Rice has a new ship, a new crew, and a new set of Jump Mages to carry him between the stars. All he wants is to haul cargo, make money and keep his head down.

His past, however, is not so willing to let him go. An old enemy is reaching out from beyond the grave to destroy any chance of peace or life for Captain Rice - and old friends are only making things more complicated!

All he wants is to be a businessman, but as the death toll mounts he must decide what is more important: his quiet life or the peace humanity has enjoyed for centuries.

While I would have preferred more Starship's Mage books with Damian Montgomery, this isn't a bad alternative. Glynn Stewart is a great writer, and so it's no surprise that this spinoff is also good. It puts more focus on the technological aspects of the SM universe, and less on magic, which is interesting in itself. The story is original enough that it doesn't come off as a copy of others either, which is hard to pull off when removing the magic focus on the series. I know the series will eventually merge the storylines into a third series, so even if this wasn't good, I'd get through it just for continuity's sake. It is, however, quite good on its own.

Unfortunately, the narrators are among those whom I cannot fathom why they even have a job like this. Audiobook narration is an art, and not everyone is suited for it. If the narrators themselves don't have the insight to realize that, the publisher, or at least the author, should. All of those seem to fail quite often on Audible, regardless of the publisher, and they have definitely failed here. Replacing Jeffrey Kafer is incredibly risky, as he's just so good. With this technically being another series than the original, there's some logic to wanting a different narrator, but that desire has backfired to an extreme degree here. These two narrators have worse character range combined than Kafer has alone, as the two of them only manage to provide a female and male voice by being one of each themselves. Within each gender, every character sounds for all intents and purposes exactly the same. Neither of them fits any character in the book, and neither of them can voice more than one character without causing confusion. It doesn't exactly help that Ian Gordon sounds like French Stewart either, as the latter's connection to comedy has severe implications on anyone who sounds like him and tries to sound serious.

I see that these two narrate together on many books. I'm guessing they manage to sell authors or publishers on the idea of two voices being better than one, but it's not when they are just that bad at their job. It's nothing personal, but these two shouldn't narrate anything.

This Audio Book was destroyed by the addition of Echo or Reverb. I have no idea why the audio book was setup that way, but I didn't make it passed chapter 3 before I gave up. It was a total disaster of a production. I will not buy anymore of the series.

neither of the readers used different voices for different characters as a result it was quite frequently very difficult to tell who was actually speaking. also having to reader seems like overkill for such a simple story.

Quality of audio is horrible

Sounds like the narrators are in a metal box. It is really distracting. Maybe next audiobook in series is better.

Grates on me when non-English names are mispronounced. Nguyen is correctly pronounced more like “when” but with the “ng” like at the end of “sing” at the beginning. And the two narrators got together and pronounced it wrong the whole way through the book.

Narrators otherwise seemed to need each other because neither was able to do significant vocal modulation to create different characters’ voices. Some accent changes are good, some could use work.

If you are going to have multiple narrators then it would probably be better to have it sound like they are talking to each other instead of reading prepared speeches at each other.
Despite the lack of coordination between the two readers, the story itself shines through. Though maybe pick up a text copy instead of the audiobook.

I listened to the book because it was next in the series. However, the performance was performed by a robot voice, very mechanical, no energy, no emotion. I will not listen to this book again until they have a real actor complete the performance. Horrible!

The audio is like listening from a tin can

I've always rated this series VERY high but this performance needs a new sound engineer and supervisor. The echo is awful and 3 hours in the story is kind of dragging a bit. Given that, but mostly the audio which additionally makes previously liked characters (like the Captain) seem pompous, I may not even bother finishing this book.

this should have been a second book

Loved the story but the narration was not good.

The story was good and enjoyable, however listening through the whole book was a slog because of the narration. The voice did not match the urgency of the book, battle instances were narrated like you would read Winnie the Pooh. They also tried to have two narrators and would cut from one to the other for a line or two which was jarring. I would have preferred it if Jennifer Gill would have narrated the whole book. Luckily the narration is switched in the next book and she is great!

TLDR: Skip listening to this one and read it. Then pick up with the audio book on the next one.