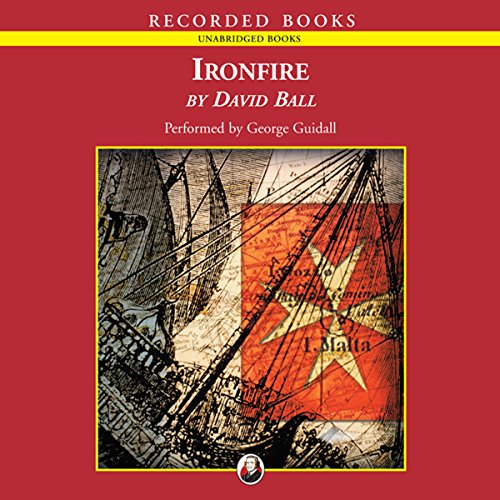 A Novel of the Knights of Malta and the Last Battle of the Crusades
Written by: David Ball
Narrated by: George Guidall
Length: 31 hrs and 8 mins
Categories: Literature & Fiction, Historical Fiction
5.0 out of 5 stars 5.0 (3 ratings)

Best-selling author David Ball has won widespread critical and popular acclaim for his sweeping novels, including Empires of Sand. With Ironfire Ball delivers a stirring historical epic of the Crusades. In the 16th century, only the Knights of Malta stand against the Ottoman Empire of Suleiman the Magnificent and his 40,000 brutal warriors.

“Ball brings the tail end of the Crusades to life in a substantial piece of historical fiction that sizzles with action, romance, and drama.” ( Booklist

What listeners say about Ironfire

After listening many times to “The Religion” I didn’t think there could be an equal. There was no Captain Tannhauser but it has so many other rich and enthralling characters. I really liked this story. I couldn’t stop listening. Thank you David Ball, you and George Guidall really made this story come alive.. For those of you who love historical drama, this is one of the best you’ll find. Cheers

Look I read and review a lot of books on this site, when I decided to take a chance on Ironfire I had not idea it was going to be as outstanding a work as it was. I have never used this term in any of my reviews, however this novel is a MASTERPIECE ! In addition, the novel is also historically accurate, so your going to learn quite alot, while being entertained for 31 hours.Ironfire this book is a must buy.

Will listen over and over

I wasn't expecting this to be one to be up there with the best when I first purchased, but what a nice surprise. The story is captivating, filled with accurate historical facts, and the narration was appealing. I hated for it to end. I know I will listen to this book many times. I put it up there with "Cutting For Stone" and "Shantaram" which were books I also wished would never end.
If you've read/listened to Roger Crowley's "Empires of the Sea", you know just how horrible the seige at Malta was for it's inhabitants as well as the Knights of St. John when they were attacked by the fighters of the Ottoman Empire. They were nearly abandoned by the rest of Europe until it was almost too late, for many it was.
If you like long, historical fiction with a great ending; a book you won't want to put down, this is it.

The story is excellent. There are several characters that are well developed and transitions from one subplot to another is extremely clear. The story is told from the point of view of several people and each tale is extremely captivating. David Ball is an excellent writer and George Guidall...... well, you can't go wrong listening to ANYTHING that he reads.

Exciting adventure into the past.

Very well written chronicle of history of Malta and the Knights of St John. Wonderfully enjoyable history lesson! Love, despair, honor, courage, battles on sea and land, all combined to keep you enthralled throughout. Narration #1.

The fiction part of the book is full grotesque.

The near pornographic PEDOPHILIC scenes are appalling. we selected this book to listen to on our family trip to the ocean. With scenes describing a 10 year old boy fondling himself as he contemplates being raped by an older Muslim man, details of young girl getting her period, a whore giving head to a "soft" salior, we had to skip so much! We have yet to hear anything about siege of Malta. The narratior was wonderful, too bad the filth he had to say destroyed our experience. NOT SAFE FOR WORK/FAMILY/OUT LOUD.


I did like the history and having it in novel form did help the time come to life- but that's all that saved it from it's cliches and tiered plot lines...

Would you consider the audio edition of Ironfire to be better than the print version?

Yes, this book is extremely well read. I loved every minute. The story line never dragged.

This is the 15th Century UGLY

War is truly ugly in the 21st century, it was even more terrible in the 15th. This David Ball did his research, This was a bloody brutal siege There were the families living on Malta that were crippled and destroyed. People were chattel for the "Church" whether it was the Christians or the Muslims. Fundamentalist fanatics only encourage bloodshed. Anyone who wishes to read another great Historical Novel about Malta at this time read "The Religion". Both this and "The Religion" made me realize how much the human race is dependent on "Religion" to function. Almost every war, through the ages was fraught for a secular cause. This was one of the most horrific battles of "The Crusades" at one point they used human heads for cannon balls. If you have a strong stomach, and want to understand the inhumanity, of war, read these books. Let's not forget the 20 century's Holocaust, and Joe Stalin who killed over 20 million of his own people. "The evil that men do.........." Knowledge will keep us from letting these things happen again. . .

Excellent piece of historical fiction. The best tale I've read regarding the events of Malta, second only to Tim Willocks "The Religion" which is more engrossing in its battles scenes and its narrator is second to none. However, Ironfire has a broader scope of characters and fleshes out the world of the story slightly better.

If you could sum up Ironfire in three words, what would they be?

Great story, characters, and descriptions of the age. I haven't enjoyed a book this much since I finished Ken Follet's 'Pillars' saga. David Ball is now on my short list of favorite historical fiction writers. I highly recommend this book.