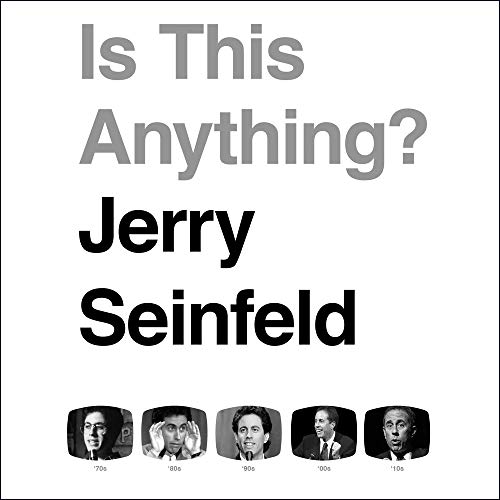 The first book in 25 years from “one of our great comic minds” (The Washington Post) features Seinfeld’s best work across five decades in comedy.

Since his first performance at the legendary New York nightclub “Catch a Rising Star” as a 21-year-old college student in fall of 1975, Jerry Seinfeld has written his own material and saved everything. “Whenever I came up with a funny bit, whether it happened on a stage, in a conversation, or working it out on my preferred canvas, the big yellow legal pad, I kept it in one of those old school accordion folders,” Seinfeld writes. “So I have everything I thought was worth saving from 45 years of hacking away at this for all I was worth.”

For this book, Jerry Seinfeld has selected his favorite material, organized decade by decade. In this “trove of laugh-out-loud one-liners” (Associated Press), you will witness the evolution of one of the great comedians of our time and gain new insights into the thrilling but unforgiving art of writing stand-up comedy.

"Gold, Jerry! This audiobook is pure gold! In that one-of-a-kind unforgettable voice, Seinfeld explores 45 years of comedy bits, sorted by decade. Each section begins with a jazzy interlude and a brief introduction narrated by Fiona Hardingham. In what is hours of pure entertainment, Seinfeld's timing is, of course, perfect, and the familiar way that he narrates creates a unique level of intimacy. Listeners will feel like they're in the front row of a show as they imagine Seinfeld's quirky facial expressions and wild hand gestures. Whether they consume this treasure a little at a time or binge-listen, the entire audiobook is one Seinfeld fans won't want to miss." (Winner of an AudioFile Earphones Award, AudioFile Magazine)

What listeners say about Is This Anything?

I think people must have thought I was crazy...I go for outdoor walks as I listen to my books...I WAS LAUGHING majority of the time...
("majority" Seinfeld voice)

If you plan to buy the printed/Kindle book, forget about it.

This book must be appreciated as an audiobook. Seinfeld telling the stories is way funnier.

I would give this book 5 stars if it were not for the British woman introducing each joke. All this does is interrupt the flow of the comedy and the natural joke progression. PLEASE re-release this book without it and it will be AWESOME!!!

No, it isn't anything

This book reminds me of bands that dump out an album of crappy songs they had rejected so they can fulfill a recording contract. It also.makes me wonder if Larry David should get most of the credit for the success of the brilliant Seinfeld TV series. On the show, Uncle Leo dismisses Jerry's comedy style as "He does that observational comedy, you know, like 'have you ever noticed?'" I couldn't stop thinking of Uncle Leo's comment while listening to the audio book, which sounds like an unfiltered collection of everything that ever popped into Seinfeld's mind. Try it yourself (when Covid allows). Go anywhere -- a supermarket, tavern, restaurant, playground, airport. Observe people's actions and try hard to imagine them as funny, and write them down. Start each one with "Have you ever noticed that when...." Almost all of them will be sweeping generalizations that are boring, like this book. I watched every Seinfeld episode with a fixed grin and laughed out loud several times at most of the shows, but not with this audio book. I think I chuckled twice in five hours.

Jerry re-enacts his old and recent material. Although this is an audio book, Jerry Seinfeld's deliveries were genuine and funny!

I love Jerry's comedy, his shows are all great. the man is funny! If your a Jerry fan listen to this book.

Pure Jerry. I appreciate that he can make me crack up and look like a lunatic while in traffic with no visual aspect or laugh track.
I’ve also never heard the super-moose bit or blowing smoke….I shan’t forget those little gems. They’ll pay me a visit someday when I’m in an important meeting and start cracking up uncontrollably! Thank you all.

bunch of little segments rather than an ongoing story. Still good to listen to, I just expected a story rather than a bunch of one liner jokes all put together

It's one thing to hear a comic tell jokes on stage. The best comics, such as Jerry, have a flow or a story so each joke ties into the next. Take the expression, "being on a roll", the jokes are just coming one after the other, they make sense. In other books I've read or listened to by comedians, they told the stories of where the origin of the joke came from or about the club they were in or the night they wrote it or something. Not this book. Jerry tells a joke. Then a lady with a British accent announces the next joke. He tells that joke. Then she announces the next joke. And on and on like this for something like 300 jokes. I don't know, I never made it past 20. She is so disruptive. It'd be different if it were clips of his shows or something but this constant annoying voice coming on in between each joke. AAAAARGH! I wanted to reach into my speakers and strangle her.
So disappointed by this audible book. Would've made a better coffee table book.

I thought this would be Jerry talking about the writing of the bits. But its just him reading out the bits with bad delivery. At the start of each one a text to speech woman says the name of it. Sorry but this is a refund

The Answer is No

No this isn't anything. Jerry Seinfeld says that this book is about how a comedian comes up with their material but it isn't. Instead it's a collection of material that didn't make it into his act, so no it isn't anything, if it was it would have made the cut. There are a few funny moments but most of it is mediocre. Also, all comedians will tell you how important timing is. But the author reads his book as if it is the first time he ever read it so the timing is dredful. Save your time and money and go watch a you tube clip of the material that actually makes it into his act.

So the book is hilarious! Jerry is great narrating his material but this is not a memoir at all. it's just bits from his stand up performances. they are short, sweet, and very funny! if you love Seinfeld's humor then this book is a must!

This guy should write a show!

Really enjoyed Jerry’s thoughts on life, would love to see him write a tv show one day. He would have lots of bits to put in there.

Sorry to say that while I'm a huge Seinfeld fan, this collection is a disappointment. I can't imagine why he thought it would be a good idea to have a weird British woman's voice introduce each of his jokes with a brash announcement of the "topic"..."Breakfast cereals"..."Airport tuna sandwich"..."Cub Scouts." Annoying. Is this anything? Sort of. But...it disappoints.

Jerry Is One Of The Best

Even when you've heard the joke before, listening to Seinfeld's delivery makes me laugh again anyway.

Its not about Jerry, it is Jerry

It’s great! It’s Jerry reading his material. If you think you’ll like it, you will. His reading gets more like his standup voice as the book moves along. It’s especially good for people who write jokes.

A collection of jokes, 40 yrs in the making.

Jerry Seinfelds collected works, as told by Jerry himself. A memoir of his life, in jokes, told chronologically. A great listen, many jokes you've probably heard, several of them you've probably never heard, but great to hear from Seinfeld himself.