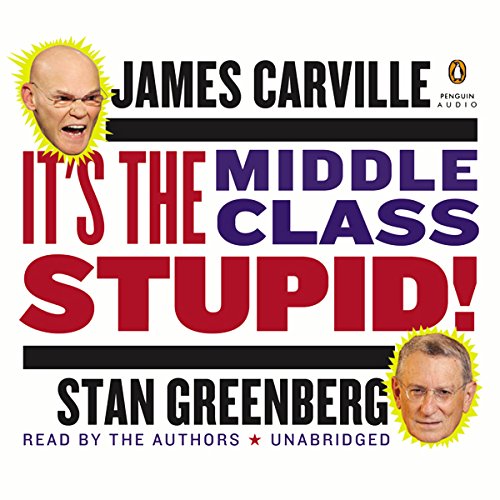 It's the Middle Class, Stupid!

It’s the Middle Class, Stupid! confirms what we have all suspected: Washington and Wall Street have really screwed things up for the average American. Work has been devalued. Education costs are out of sight. Effort and ambition have never been so scantily rewarded. Political guru James Carville and pollster extraordinaire Stan Greenberg argue that our political parties must admit their failures and the electorate must reclaim its voice, because taking on the wealthy and the privileged is not class warfare—it is a matter of survival.

Told in the alternating voices of these two top political strategists, It’s the Middle Class, Stupid! provides eye-opening and provocative arguments on where our government—including the White House—has gone wrong, and what voters can do about it.

Controversial and outspoken, authoritative and shrewd, It’s the Middle Class, Stupid! is destined to make waves during the 2012 presidential campaign, and will set the agenda for legislative battles and political dust-ups during the next administration.

What listeners say about It's the Middle Class, Stupid!

Enjoyed listening to both and their information

What does James Carville and Stan Greenberg bring to the story that you wouldn’t experience if you just read the book?

New information between the parties

No, had to digest all the information

Great road map for a path to American prosperity

If you could sum up It's the Middle Class, Stupid! in three words, what would they be?

James Carville, he presents a unique, intelligent, and entertaining perspective.

No, I wanted to take my time so I could absorb as much as possible.

The chapter on the Paul Ryan Budget was my favorite.

Carville and Greenberg in your car

I love to hear James Carville talk whether it be clipped insights or impassioned calls to action. I don't think I would have ever read this book but wanted to know what it said. This made it the perfect book to read for a long drive.

It is a type of text I'm not familiar with.
To me it was like listening to a long interview with Greenberg and Carville. While they usually have to glide over stats the book length allows those to be included. While Carville & Greenberg's lives are profoundly important to their message, during interviews where we hear them for a minute here or there everyone assumes we know who they are. We get to hear them tell their story in this book.
I enjoyed it.

Enlightening information for all Americans.

What made the experience of listening to It's the Middle Class, Stupid! the most enjoyable?

I felt I learned much more than would have imagined.

The degree to which the financial industry is corrupted was shocking. The fact that they have largely gone unpunished is also shocking.

The entire book was compelling.

How Americans are being screwed by Wall Street.

James Carville is very direct, which I appreciate. Both authors was extremely knowledgeable about the subject.