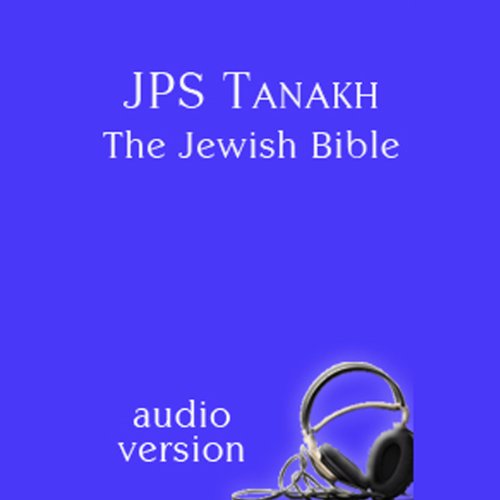 Regarded throughout the English-speaking world as the standard English translation of the Holy Scriptures, the JPS TANAKH has been acclaimed by scholars, rabbis, lay leaders, Jews, and Christians alike. The JPS TANAKH is an entirely original translation of the Holy Scriptures into contemporary English, based on the masoretic (the traditional Hebrew) text. It is the culmination of three decades of collaboration by academic scholars and rabbis, representing the three largest branches of organized Judaism in the United States.

Funding for this recording is made possible through the generosity of Aaron Feingold, M.D., in memory of Esther Feingold, who saw life "with a good eye" (Pirke Avot); Dr. Seymour and June Kessler, in memory of Harry and Rose Kessler, remembered with love; and Norman and Edith Weisfeld, in loving memory of Benjamin and Rose Krumholz, and David Weisfeld.

What listeners say about JPS Tanakh

I would love to listen to selected passages, but I am unable to find a way to navigate. I feel this is particularly important for an audio Bible.

This reading is truly a story being told, not simply a dry reading, as I have encountered many times in the various translations I listen to.

Part 3 ends with 1 Kings; while part 4 starts with Jeremiah. Where are 2 Kings and Isaiah? I have no idea.

The organization of the files -- or lack thereof -- makes it possible only to listen to this recording through. Why couldn't they have split the files into the books of the Tanakh, so that it is possible to choose a book to listen to? Instead the recording is split into 9 files with the same name, each of which is split into "Chapters" at random parts.

Audible, did you spend any time on transferring this to computer format? It seems as if you didn't.

I need to be able to jump around in the recording, this is not easy to do. It offen get stuck on Buffering the text. The chapters don't match the text chapters.

Where does JPS Tanakh rank among all the audiobooks you’ve listened to so far?

needs to be labeled hard to find books hard to use

I'm trying to find psalms and I have to go through everything in order to find one thing. unable to label books or whatever they consist of.

never know what book or what place you're going to

I was moved as God forgave and loved his people.

There is no other ancient writing like this. I was there in the story. I was moved by God's love for his people. The clarity of the text is remarkable. I have read many many ancient religious texts but none of them hold a candle to the Tanakh. God's relationship with mankind is clear.

What can I say, the narraters are superb, they put a lot of feeling into reading the torah portions. I love this audiobook and highly recommend it.

What made the experience of listening to JPS Tanakh the most enjoyable?

The talent of the readers.

Moses, because he was a multi-faceted personality.

I was built up spiritually.