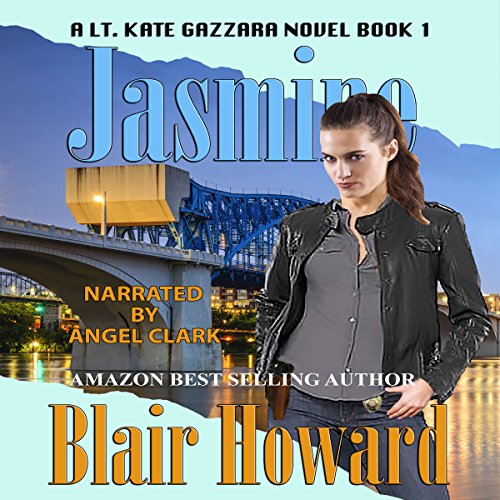 Written by: Blair Howard
Narrated by: Angel Clark
Try for $0.00

It was late Friday evening when they discovered the body. The girl had been in the concrete pipe for more than a week. The daytime temperatures were hitting 120 degrees. It was the stench that drew the kids to her. Who was she? Who put her there? Who...killed her? It’s Kate Gazzara's first case, a mind-bending riddle, and as if that wasn’t enough, she has a new partner to cope with.

Check out this gripping, fast-paced thriller, the first in the new Harry Starke spin-off series featuring street-smart Lieutenant Kate Gazzara and a cast of fascinating characters, including the man himself, Harry Starke, and several other old friends. Grab your copy now.

What listeners say about Jasmine

I have listened to all 13 Harry Starke books & had some idea of what I was looking forward to. The story was pretty good, but I did not like the narrator...her female voices were rather whiney & Harry just sounded sleazy. The story had all the twists & turns I expected, but the narrator made it painful to listen...I would recommend this book in print form so not to be distracted.
I will definitely read the next book in this series instead of using the audio version

I received a free code for this book.
Enjoyed the story, though I fouhd the narrator's voice a littly hard to understand, but that could just be me.

This is a good mystery book. This is the first book in this series. It holds your attention. I will listen to the next book. Angel Clark does a great job narrating this book. She does not do the whole series. if my review is any help will you please click on the helpful link below. Thank you.

I enjoyed the story but I didn't like the main character detective. She was overly masculine for my tastes and rubbed me the wrong way. I never connected with her. I voluntarily listened to a free copy of this and am giving an honest review. The narrator was good.

Enjoyed the linkage from Harry to Kate

Genre: Mystery/ Thriller
Summary:
Kate Gazzara’s a character in the Harry Starke books. I’ve only listened to the omnibus for 10-12 of those. This story takes place long before the one I experienced thus far. I like it better than the original series.

This covers Kate taking on her first official case as the lead detective.

Additional Comments:
• I find it amusing that it’s the Lt. Kate Gazzara series, but she’s a sergeant in this book.
• There’s a dead kid in a pipe. The murder mystery isn’t all that complicated, but I think that’s pretty realistic. Sadly, the people most likely to murder somebody are relatives and family friends. It’s a very rare breed of killer who offs a complete stranger.
• A dead kid in a pipe is a public relations disaster waiting to happen.
• 5 days is a heck of a turnaround time for a murder case. You probably wouldn’t get the results for some tests back in that timeframe.
• A few voices sounded like angry rodents, but the voice for the main character fit well.
• Content warning: some cursing, though not as much as in the Harry Starke series. Some talk of sex. Like the other series, nothing is described just comes up fairly regularly.
• Kate was kind of lead around, which might not be too crazy if she were indeed new to this, but at this point, she’s supposedly been on the job like 7 years.
• Her move to put her dumb partner in line would probably get her in a heck of a lot of trouble.
• Tracy’s kind of a lump but her reaction to him helping/not helping is way over the top.

Conclusion:
Better than the Harry Starke books. Still crude, but has potential.
*I got the book on a free code site. I understand I do not have a set-in-stone obligation to share my thoughts but have freely chosen to do so anyway.

A hard cop investigates the murder of a teen

Jasmine tells the story of Kate Gazzara’s first case without Harry Starke as her partner, and it’s a great story. However, Kate is not a very nice person. Her treatment of her new partner, in spite of his reputation, which may be well deserved, includes a blatant act of sexual harassment as well as her being just plain old mean and rude. Whether or not he’s a dick, it doesn’t excuse her actions. She never gives him a chance. And he’s not the only one she’s mean to. There is also a tragic event towards the end of the book that could have and should have been prevented if Kate had been more on top of things.

The narrator gives Kate a soft Southern accent which seems contrary to her harsh character but is actually somewhat fitting when you think about it. I had gotten so used to the voice from the Harry Starke books, that it took some getting used to. She does a nice job with the book.

I received a complimentary copy of this audiobook. This is my honest and voluntary review.

I loved this story with Kate as the main detective working on a murder case. Narration was great as each character came to life with unique voices.

Very good storyline with an easy flow. Well written and imaginative. I loved Jasmine. A tough, go get her perp at all cost type of detective. But also has a soft side.

Angel Clark does an exceptional job narrating. I loved the voices she used for all the characters. Each was perfect and easy to follow.

I'm looking forward to more from both the author and narrator, they are quite talented.

first in a series connected to another series

I enjoyed the book and intend to read at least the next in the series.
This is the first book I have read/listened to by this author and the story was good however there were comments/thoughts by main character that clearly are references to future / other books that for me added nothing to narrative except to break it up and distract .