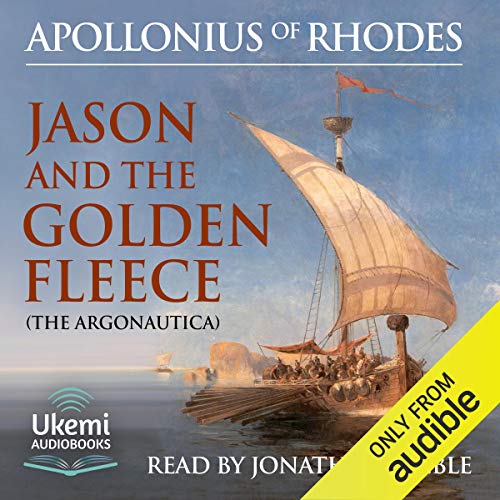 Jason and the Golden Fleece

Jason and the Golden Fleece is one of the finest tales of Ancient Greece, an epic journey of adventure and trial standing beside similar stories of Perseus, Theseus and the Labours of Heracles. The finest classic account comes from Apollonius of Rhodes, the Greek poet of the 3rd century BCE and librarian at Alexandria. Though less well-known than Homer's Iliad and Odyssey, and much shorter, it is an epic poem which is both exciting and moving, with remarkably vivid portraits of the main characters, Jason and Medea. In the hands of Apollonius, these are far from one-dimensional figures of ancient myth.

Jason is a very human hero, forced to undertake the quest by a vengeful ruler, and though he leads a ship full of heroes - Heracles, Peleus, Caster and Polydeuces among them - he has moments of doubt and prevarication which he has to overcome in order to ultimately grasp the Golden Fleece. And Medea, a virgin witch possessing consummate skill with spells and an ability to be cruel, is shown here with some sympathy, for she is under the sway of the immortals Hera and Athena. Succumbing to their machinations and Eros's arrow, she finds herself on a dangerous path, flouting the will of her powerful father Aeetes, King of the Colchians, to help the Argonauts.

And then there is the ship itself, Argo, wrought with the help of Athena to survive the challenges of a distant voyage past Scylla and Charybdis into the Black Sea. Apollonius weaves plot and poetry, courage and boldness, tenderness and sympathy, to fashion one of the greatest monuments of Western literature. R. C. Seaton's classic translation has been considerably revised for this recording by Nicolas Soames, and it is read with verve by Jonathan Keeble.

What listeners say about Jason and the Golden Fleece

This counts as one of those books I’m glad I read, but I don’t expect to be reading it again anytime soon. It falls somewhere between Homer and Virgil, but is far more intellectualized and unemotional than the writings of either of those people. It’s not because of the reading: Jonathan Keeble gives his usual spirited performance. It’s just that for all the murder and mayhem that occurs, it doesn’t convey a sense of the stakes involved for any of the characters. It’s hard to imagine the Argonautika and at the same time try to feel the spellbinding rage of Medea that pours out of Euripides’ play.

There were two big problems for me. One is the unfamiliarity of many of the names. Apollonius doesn’t help matters by starting the poem off with a 20-minute recital of the names of the Argonauts, complete with genealogies. I found a kind of solution by following along in a printed version: it wasn’t the same translation, but it helped me keep my bearings.

Then there was the unfamiliar geography. There are plenty of maps of the Argo’s voyage online, but none of them were detailed enough or readable enough to follow the text closely. Plus I was left with the impression that Apollonius pulled a fast one. One minute the heroes are pulling up on the western shore of the Black Sea; and it seems that only a page or two later they are sailing down what is now the coast of Albania. How did they get there? Reference is made to some rivers that don’t exist, but if the cross-country trek is described in any detail, I missed it. The legerdemain occurs again shortly afterwards, when suddenly the Argo is sailing down the Rhône to the Mediterranean and the west coast of Italy.

As I said, I’m glad I read it, and it’s definitely worth a listen. It does help fill in some of the gaps left by Homer and Virgil. But it felt more like homework than most audiobooks I listen to.

LATER: I went back and tried to retrace the return route of the Argo using different translations and maps. I believe I understand it now. It appears that Apollonius thought the Danube River, which Jason uses to make his escape, branches off to the south at some point and enters the Adriatic Sea near present-day Croatia; and that this entire route was navigable by ship. In the next phase of his journey, he enters the Po River on the east coast of Italy; and again, it seems to be Apollonius’ notion that ships could sail up this river through the Alps and Lake Geneva and directly into the Rhône, which would bring them down to the Ligurian Sea near present-day Genoa. The trips are described so vaguely that he seems to be trying to fudge this. In an introduction, EV Rieu says it’s possible some material was removed from these river trips to shorten the poem.

Epic Adventure on the high seas.

Come and witness a seafaring romp through Poseidon’s ancient waters. You will see pats bend like bows at the tremendous power of heroic oarsmen, battles with harpies and even a dove’s tail shorn off by crashing mountains of rootless rocks in the seas. Would you think that a dove losing its tail feathers would be the prompt to turn around out to go for it? You might be surprised. Medea plays a pivotal role in this story. Maybe go read the play before or after listening to this audiobook.
Ukemi is the first name in audiobooks if you ask me. They are bringing classics to life with world class vocal talent and the very best of translations. You must check out their recordings of the Socratic dialogues of Plato. Side-splittingly funny, and the actor who plays Socrates doesn’t miss a single beat. What fun and so accessible! Better than any introduction to philosophy. Look through Ukemi’s catalog of titles. You won’t be sorry.

Thank you Ukemi for my classical education! Keep up the great work and production value.