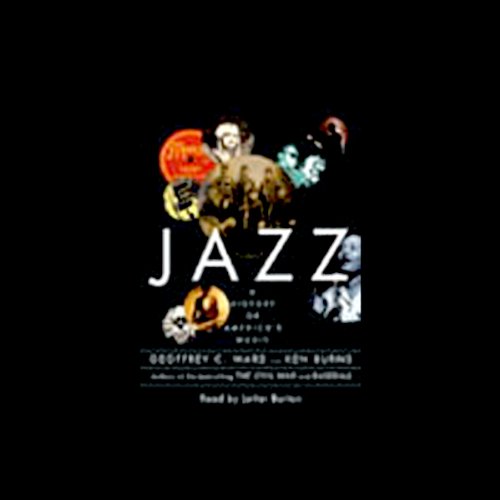 Here are the stories of the extraordinary men and women who made the music: Louis Armstrong, the fatherless waif whose unrivaled genius helped turn jazz into a soloist's art and influenced every singer, every instrumentalist who came after him; Duke Ellington, the pampered son of middle-class parents who turned a whole orchestra into his personal instrument, wrote nearly two thousand pieces for it, and captured more of American life than any other composer. Bix Beiderbecke, the doomed cornet prodigy who showed white musicians that they too could make an important contribution to the music; Benny Goodman, the immigrants' son who learned the clarinet to help feed his family, but who grew up to teach a whole country how to dance; Charlie Parker, who helped lead a musical revolution, only to destroy himself at thirty-four; and Miles Davis, whose search for fresh sounds made him the most influential jazz musician of his generation, and then led him to abandon jazz altogether.

But Jazz is more than a mere biography. The history of the music echoes the history of twentieth-century America. Jazz provided the background for the giddy era that F. Scott Fitzgerald called the Jazz Age. The irresistible pulse of big-band swing lifted the spirits and boosted American morale during the Great Depression and World War II. The virtuosic, demanding style called bebop mirrored the stepped-up pace and dislocation that came with peace. During the Cold War era, jazz served as a propaganda weapon - and forged links with the burgeoning counterculture. The story of jazz encompasses the story of American courtship and show business; the epic growth of cities, and the struggle for civil rights and simple justice that continues into the new millennium.

What listeners say about Jazz

Full of information and short stories about the musicians that contributed to the genisis and evolution of jazz. I found myself struggling to pause my listening due to available time constraints. However,I always looked forward to pick up where I left off. The only improvement suggestion I could offer is some additional samples of some of the compositions that the narrator was describing throughout this book.

I love to hear the history behind the music, and this book is very detailed. It is my first download, and first audio book. I find Mr. Burton's voice very distinct, and animated. Contrary to a previous review, I have no trouble understanding what is being said. I recommend any one read it, not only is it the story behind the music, it is a seeminly decent portrayal of the culture of the periods covered in the book. IF you enjoy jazz, I suggest you download this book for a better understanding of its development and key artists. Enjoy, I did, and will again!

The book is very interesting, but I find it hard to follow: the reader drops his voice at the end of sentences or phrases, often does not pronounce names clearly, and does not pause at major transitions. I find myself needing to backspace the player to try to hear something I missed, often without success.

great great book. Very comprehensive, particularly in the early years. It put together a history that I had not quite been aware of. Highly recommended.

Entertaining but narrative was lacking some depth.

I appreciate LeVar’s narration, but feel he may not have been the perfect choice for this one. His reading lacks a certain character or depth. It’s not a deal breaker for this version, but it could have been better with a different reader. (For the record, I love Levar Burton as an actor)

He has a stupendous voice. My children grew up with his Reading Rainbow and loved it. The subject is fascinating as well & better for me than some of the other jazz books I listened to.

Did not link the use of the N word used

Would you listen to Jazz again? Why?

There should be a listening rating to let the listeners know if cursing or racial language will be used in the audiobook. I was shocked to hear that word used. Very inappropriate.

There should be a listening rating to let the listeners know if cursing or racial language will be used in the audiobook. I was shocked to hear that word used. Very inappropriate.