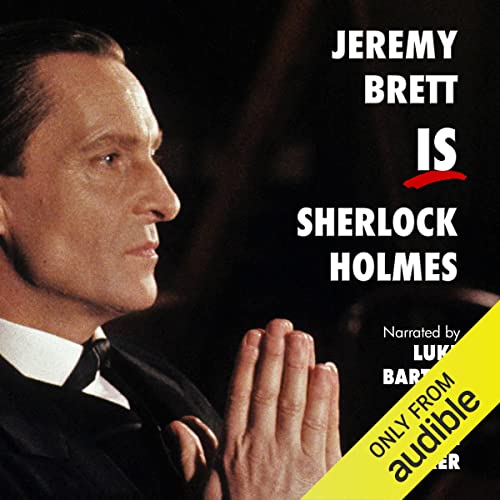 Written by: Maureen Whittaker
Narrated by: Luke Barton
Try for $0.00

Jeremy Brett's performances as Sherlock Holmes over a period of more than 10 years are to this day collectively considered the definitive iteration of everyone's favourite master sleuth. Jeremy delighted viewers with his dashing, arrogant, moody interpretation of the most popular famous detective. He brought a brooding intensity to his finest role - one of disturbing power.

In this audiobook, Maureen Whittaker takes the listener on an intimate journey through the entire Granada Sherlock Holmes series, exploring and analysing the decisions, process and reaction to Brett's portrayal of Holmes. Using an array of first-hand reflections from those involved in the production of the series - and from Jeremy himself - listeners will hear, episode by episode, how Brett constructed his interpretation of the world's only unofficial consulting detective. From the initial decision to cast Brett, his ambivalence to accepting the role, the initial challenges of bringing that fascinating character to life, the impact of the loss of his wife, to the ongoing success of the portrayal until his failing health prematurely ended his life, this audiobook is perfect for fans of Jeremy Brett, with an intimate portrayal of a complex man playing a complex role.

With more than 50 chapters and almost 10 hours of audio, this is the perfect addition to any Sherlock Holmes fan's bookshelf.

What listeners say about Jeremy Brett Is Sherlock Holmes

The book contains excellent research from multiple sources ao that the author's credibility is without question. The insight gained into Jeremy Brett's personal life, and his time portraying Sherlock Holmes, allows the reader a fuller picture if this complex person. My only complaint, is that the narrator would occasionally mispronounce words and that the chapter titles in the Audible Version are so terribly misspelled that it is truly embarrassing. But none of these are enough to recommend not delving into this wonderful work.

This book takes us behind the scenes of the Sherlock Holmes series starting Jeremy Brett. The how and why of Jeremy's interpretation of the great detective is explained as well as amusing stories of the filming by the cast members. The narration is excellent and I will look for other books narrated by Like Barton. I highly recommend this book.