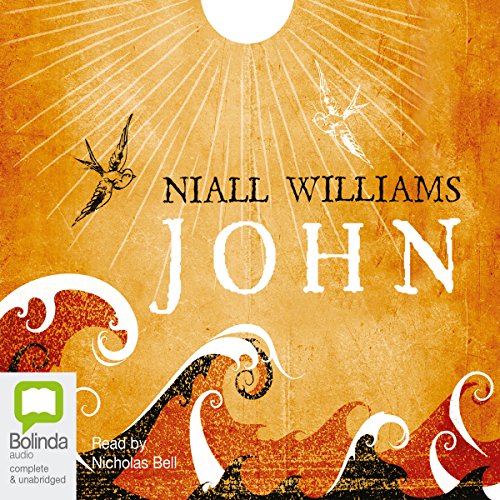 Written by: Niall Williams
Narrated by: Nicholas Bell
Try for $0.00

In the tradition of Jim Crace's Quarantine and Anita Diamant's The Red Tent, John is a stunning, lyrical reimagining of John the Apostle in the final years of his life, by the critically acclaimed and bestselling author of Four Letters of Love.

In the years following the death of Jesus Christ, John the Apostle, now a frail, blind old man, lives in forced exile on the desolate island of Patmos with a small group of his disciples. Together, the group has endured their banishment, but after years awaiting Christ's return, fissures form within their faith, and, inevitably, one of John's followers disavows Christ's divinity and breaks away from the community, threatening to change the course of Christianity. When the Roman emperor lifts the banishment of Christians, John and his followers are permitted to return to Ephesus, a chaotic world of competing religious sects where Christianity is in danger of vanishing. It is against this turbulent background-and inspired by Jesus's radical message of love and forgiveness-that John comes to dictate his Gospel.

Immensely impressive and based on actual historical events, John is at once an ambitious and provocative reimagining of the last surviving apostle and a powerful look at faith and how it lives and dies in the hearts of men.

At a time when many remain skeptical about religion but still thirst for spiritual fulfillment, Niall Williams's extraordinary and masterful new novel reveals a universally appealing message of hope and love.

What listeners say about John

A fascinating study of the power of faith, but...

Yes. NW is a fabulous writer and I never wanted to put it down.

Most: Portrayal of a fragile community of faith.
Least: How sectarianism starts/is inevitable (I would've liked more on this)

Solemn but salivary (too many swallowing sounds)


Niall Williams asks the question "How hard was it, in the first days, to cling to a faith in the extraordinary story of Christ.  NW's answer is, soul-destroying hard! The message that Jesus' disciples believed he had brought from heaven must have seemed incredible even to them and their tiny numbers of followers.  NW's book is a gripping portrait of the fragility of an early Christian community as it waited in vain for Jesus' return. They were doing so during a time and in a place that, it seems, was unusually full of powerful persuasive cults including competing ones that also Jesus in their narratives. The story is fantastically powerful because we know, of course, how gloriously it unfolded for Christianity in the centuries that followed.

But, "John" is ultimately unsatisfying. NW' resolution of the complex components of doubt that multiply in the book felt to me like a cop out.  No spoiler here but I really wanted to know how, without magic, NW felt his characters managed to keep the magical story alive. My sense is NW thinks it must have involved magic but does he really believe that?

Also NW only narrowly avoids Python. At one point someone does say "He's not the messiah!"

Still I recommend the book.

A good book if you are in the mood for reflection.

this book puts you in the mind of the characters and their motivation, fear and uncertainty of God's design for them