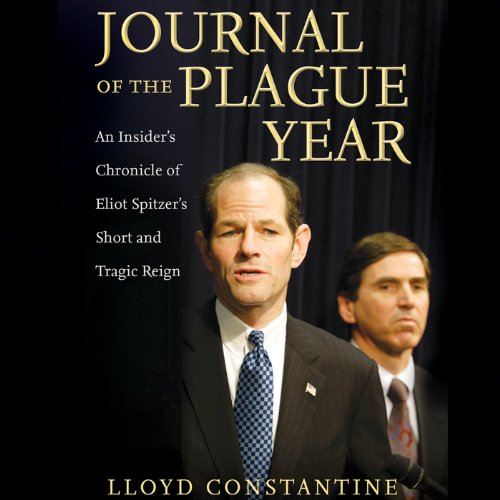 Journal of the Plague Year

Written by: Lloyd Constantine
Narrated by: Jeremy Arthur
Try for $0.00

Throughout the troubled last months of Eliot Spitzer's term as governor, longtime friend and senior advisor Lloyd Constantine was tempted to keep a diary that he wanted to call A Journal of the Plague Year, after Daniel Defoe's book about the year the black plague swept London. Constantine never kept that diary, but after Spitzer resigned in the wake of the 2008 prostitution scandal, he penned this book instead. Performer Jeremy Arthur's deep, rich voice lends drama to the sobering story, which serves both as political biography and cautionary tale. Far from some juicy tell-all, Journal of the Plague Year says little about what led to Spitzer's downfall, and focuses instead on the close friendship between the two men, the ins and outs of Spitzer's difficult reign, and the terrible weekend before Spitzer finally resigned.

An intimate account of the Spitzer administration, one man's political downfall, and the enduring friendship between two complex men.

The March 10, 2008, disclosure that Governor Eliot Spitzer had patronized prostitutes from the Emperor's Club VIP sex ring shocked New Yorkers and his admirers around the world, who had celebrated Spitzer as the "Sheriff of Wall Street" and a likely future U.S. president.

Ironically, one man's disillusionment with Spitzer had begun to disappear 15 hours earlier, when Spitzer confessed what the rest of the world would soon learn in a media storm of unprecedented intensity. For Lloyd Constantine, Spitzer's senior advisor and longtime friend, the confession explained the governor's recently erratic behavior and marked the end of a "plague year", which encompassed the troubled Spitzer administration and its flawed transition to power.

Journal of the Plague Year is Constantine's intimate account of the 17 calamitous months preceding the March 10 revelations and the futile 61-hour battle waged by the author and the governor's wife to persuade Spitzer not to resign but instead to fulfill promises made to the voters who had elected him in a record landslide. The book concludes a month after Spitzer and Constantine resigned, as they confronted their shattered careers. People seeking information about Spitzer and prostitutes will find none here. Instead, they will learn how the Spitzer regime suffered crippling setbacks after the governor declared war with the legislature in his inaugural address, including defeat over the choice of a comptroller, a premature effort to end Republican control of the state senate, capitulation on a mediocre $122 billion budget negotiated behind closed doors, the scandal called "Troopergate", and a controversial plan to give driver's licenses to illegal aliens, which sparked a national debate affecting the 2008 presidential election.

Spitzer and his administration got their bearings at the beginning of 2008. However, the March 2008 revelations and Spitzer's refusal to fight for his job quickly ended his short and tragic reign.

What listeners say about Journal of the Plague Year