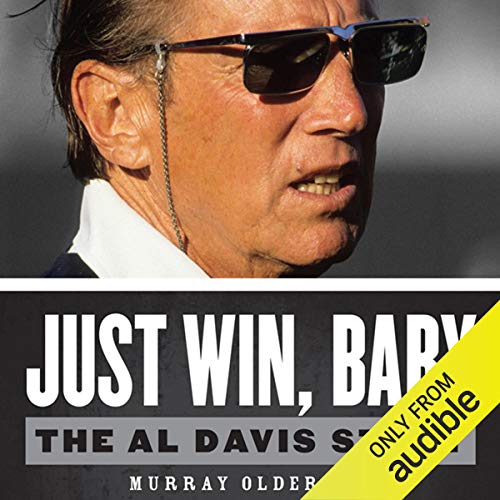 Written by: Murray Olderman
Narrated by: Jeremy Arthur
Try for $0.00

Revealing how an obscure young assistant coach, in less than a decade, progressed to become a head coach, general manager, league commissioner, and controlling partner of the Oakland Raiders franchise, this biography pays tribute to the late Al Davis. Contrary to Davis’s notoriously quirky and reclusive reputation, this account is based on the inside scoop he personally gave the author, lending his full cooperation to relate the account of his life and career.

With a treasure trove of previously untold anecdotes, personal reminiscences, and highlights of Davis’s leadership of the Raiders as professional football became America’s premier spectator sport, this chronicle details the major impact this maverick owner had - not only on professional football, but also on America’s sports scene as a whole. The subject’s influence on the merger of the American and National Football Leagues into the greater NFL is also reviewed as is his election to the Pro Football Hall of Fame.

Worth listening to, but has some flaws.

Would you consider the audio edition of Just Win, Baby to be better than the print version?

No, probably the same.

What other book might you compare Just Win, Baby to and why?

None that I can think of.

What aspect of Jeremy Arthur’s performance would you have changed?

His voice was pleasant, but his speech was sometimes halting. Many times I couldn't tell if he was ending a sentence or starting a sentence. He also didn't do the work of looking up words that he wasn't familiar with. E.g., he wasn't even close when he pronounced Kezar Stadium.

It was good, but four or five sittings was fine.

I am an ex-NFLer and played against and knew many of the athletes described in the book. Also, I met Al Davis once just after I retired, and he said to me very sincerely, "Let me know if I can do anything for you." So naturally, I wanted to find out more about the man. The information about Al Davis, the AFL, the merger, and great players was all very interesting, but I felt it had two major flaws. One was that the author repeated himself a number of times, and sometimes he described certain scenarios at least three times (so and so was sent to such and such team). Secondly, the author was hired by Davis to write the book, and he was also a friend, and so he comes off as a Davis apologist. The majority of the book seems as if Davis wrote it himself--much praise for the great Al Davis. Still, I would listen again, as I learned a lot about the game I played and loved.

substance is great. narrator is pathetic

narrator displays zero of ALs passion. tough to understand his thinking with a full narrator

loved it. but I am biased I enjoy most raiders books and boom this was no different.
just win baby