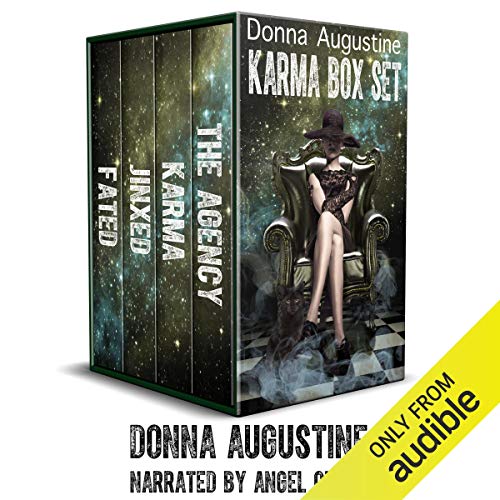 Written by: Donna Augustine
Narrated by: Angel Clark,Andrew B. Wehrlan
Try for $0.00

It's not like I wanted this job. I wasn't even in my right mind when I accepted the position.

Now, I'm surrounded by crazy coworkers like Lady Luck, who's a bit of a tramp,

and Murphy's Law, who's a bumbling oaf. But the worst is Fate. He's got a problem with transfers like myself, and I have to see him constantly. It's unavoidable. We're hunting the same man, my murderer.

Karma, it's what they call me and the very essence of who I am. When I died young, I was recruited by the agency that keeps the Universe running smoothly. As someone with a human past, most of my coworkers consider me inferior.

But not everyone. Something evil has been stalking me for centuries. It's been biding its time, waiting for the moment when it will strike and it needs me to do it.

Its methods of recruitment are tearing apart every aspect of my life. I'm slowly losing myself, both mentally and physically. I don't know who I can count on but I'm finding out how much I'm willing to sacrifice to save the ones I care about.

Settling the cosmic score is what Karma was drafted by the Universe to do. But what happens when all the humans start going to the dark side? She's got to find the source and the most likely suspect is her long time rival, who outclasses her in both power and resources.

Luckily, she's got a new partner, Fate, but he comes with his own set of complications. The confirmed bachelor has a target of his own.

This is a short Karma prequel. This was written after the series was complete to give more insight into the events prior to Karma. It can be read at the beginning or end of the series.

So I love the story and everthing for this series. I just really, really did not like the narrator. My ears felt like they were bleeding. Why does she have to shout every word. I wouldn't listen to this book on audible, get it on kindle or a physical copy instead.

The main character is the most annoying creature I came across in these kind of books. she is dumb, self centered, arrogant, and selfish. she thinks too highly of herself, doesn't want to earn her place but want all the benefits everyone else has.

Not gonna finish the book. don't waste your credit.

The story (for the most part) was very good, but the narrator (Angel Clark) had an odd tendency to somehow both over and under state many lines. She also somehow managed to ruin every male character by making them ALL sound like emotionless robots. There was no nuance to her performance of the males in the story.

For some reason, she had a lot of the female characters yelling. Most of the time for no reason I could ascertain! I might be picking this set up on Kindle in the future, because I feel like I missed out on a lot, do to how distracted I got from the performance.

This narrator is awful. Totally ruins the story. The story itself is unique and engaging. This narrator beats it to an unreasonable heap of laughable male voices and adds mannerisms and inflections that war with the characters. After reading other reviews I figured I had heard poor narration before and could muscle through it or ignore certain things. This is some of the worst I've heard. Angel Clark manages to turn Fate whiney pompous ass hat with no redeeming qualities. She portrays the character in such a way that completely disrupts the story . Think about reading a serious and touching scene, now have those same characters say the same things non chalantly or in bored tones. That's what you are getting here. Don't t waist a credit.

I really tried to get into this book and made it to chapter 22 but had to stop. I couldn't get past the horrible narration, i even tried to speed it up. It sounds very robotic and it distracts from a relatively good storyline. This is my second attempt at listening and unfortunately there won't be a 3rd.

story was a great one , but I have never heard a more horrible way of narrative in my life. She would be a perfect William Shatner wanna be .

Fantasy and Reality come together!

The characters in this series are so real that I almost forget that they represent intangible human constructs like Fate, Luck and Karma. With Augustine's articulate and descriptive writing, as well as Clark's perfectly tuned voice telling this story, you'll never want to stop listening.

I like this book. I like the premise of it and how the story played out. HOWEVER I’m not sure if it was the narrators fault or just the publishing, but it often left me confused like I missed something. It’s like Karma didn’t finish her first issue before moving to the next in the middle of the first. If that makes sense. I kept having to go back wondering what I missed and it was just how the story was narrated. Angel Clark, although not the worst narrator, really needs to find another job. Her mono tone was terrible and distracting. Not as bad as Lauren Schroeder tho so I was able to look over it but it was hard. Every good scene or major thing that happened felt rushed while the in between was smooth. It leaves you dealing confused and having to rewind it! That’s my biggest complaint. But I like the story. It’s uncommon and it kept my interest rather than what I usually do with a terrible narrator, return for a refund. I’ll continue to listen to the series but if your reading this, just read the book. I think it’ll be a lot better!

This story really has so much potential. I love the concept and even the plot, I only wish it was written better. The author’s writing style is just not my cup of tea. For example, she re uses descriptive pronouns, sometimes in the same or adjacent sentences. The way she writes the conversations between her characters is incredibly frustrating. It seems that they can’t and don’t communicate at all but just assume and throw insults. Sometimes the verbal dialogue doesn’t even make sense and if it wasn’t for the predictable way they interact the reader would not be able to even follow what is supposed to be happening. Their relationship is nothing but tension and turmoil, exhausting for me and yet supposedly they have this great love. I can think of only one or two moments of tenderness in the whole series! Now I like your badass chick as much as the next girl, but there should be a balance. Imagine this story in the hands of JK Rowling or Stephanie Meyer, it would be fantastic!

As to the narrator, she was so difficult for me to handle. She sounds like a mix between a bratty teenager and a valley girl. She reads the voices so aggressively and her character voices are awful. Even if you only listen to the way she reads the chapter titles she sounds either bored or pissed off. My guess is she added a lot to the angry feeling of the story. In addition to this, the recording was not edited well. It repeats sentences, and at one point she stops and clears her throat! That should have been edited out!

To summarize, it was a great concept and story. If you are just looking for a brainless fix of badassery and stunted conversations, and if you don’t mind the voice of a whinny, nasally, angry narrator, this book is perfect for you.

This book series (and I am reviewing the series) is entertaining, has some really cool ideas in it but is lacking in common sense character development.

SPOILER ALERT
Read on only if you do not mind a spoiler.

The main character is positioned as a powerful person able to ignore the will of the universe and do what she wants anyway. She uses this ability when pushed to do so by the bad guys but not much, particularly latter in the series. It makes her kinda lame rather than getting stronger.

The character is also a whining, overly emotional woman. The kind of woman no man (well me and anyone I know) would ever date more than once. Maybe women like her more.

The story itself is quite good. Built around a fun concept of the universe calling up people to serve on roles like fate, Carns, Murphy’s law, Lady Luck and the jinks. These people maintain balance and everything goes wrong. Good premise and the story develops nicely. Just wish the lead character was not like chewing glass at times.

Angel Clark made this a laborious experience with her errors and robotic reading. Try editing your recordings before submitting them.

Good edge of your seat till the end.