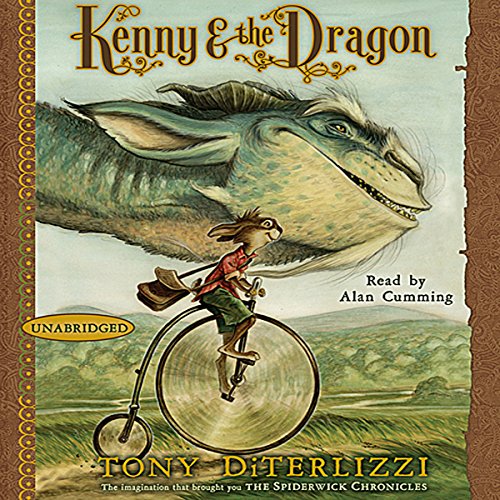 What do you do when your new best buddy has been designated a scourge by the community and marked for imminent extermination? Just ask Kenny Rabbit.

When the simple folks in the sleepy little village of Roundbrook catch wind that there's a dragon running loose in the countryside, they get the wrong idea, and the stage is set for a fight to the death. So it's up to Kenny to give his neighbors front-row seats to one of the best-known battles in history - the legendary showdown between St. George and the dragon - without losing a friend in the fray.

What listeners say about Kenny & the Dragon

An uplifing tale, for adults and kids alike.

Fun retelling of The Reluctant Dragon

An animal "redo" of The Reluctant Dragon!

What a great story, the narration was fabulous.
Although the story is familiar the animals give it a nice change. I enjoyed it!

Our family really enjoyed this book, both the story and the reader kept us in stitches!

Allan Cummings rocked this one!

The story is lovely with great characters, which Allan Cummings made all come alive. Graham in particular was wonderful.

I listen to it with my daughter while driving she is eight. We both really enjoyed the book.

very good I like the book I is very good

Listened to this book along with my daughter, and it was a really fun story. The performance by the reader was amazing.

This was the perfect book to share with my 11 yeat old. Her and I enjoyed reading this book!!

Would you consider the audio edition of Kenny & the Dragon to be better than the print version?

I've never read the print version, so I am unable to adequately answer the question.

What was one of the most memorable moments of Kenny & the Dragon?

His voicing and overall enthusiasm. Alan made the story come alive and I could picture the scenes in my mind as I listened along.

I would have liked to, but was unable to.

Absolutely love and would recommend to all ages.