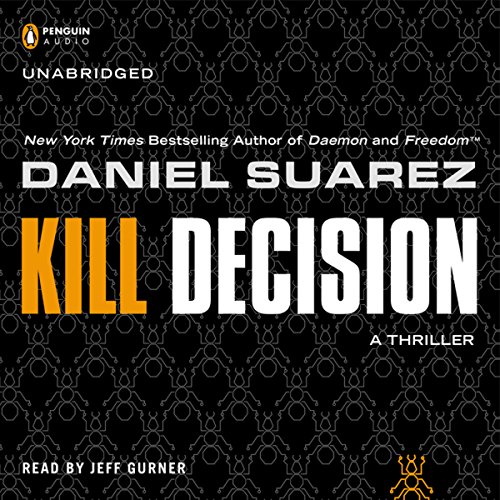 Written by: Daniel Suarez
Narrated by: Jeff Gurner
Try for $0.00

The shocking techno-thriller that cements Daniel Suarez's status as the heir to Michael Crichton and Tom Clancy - a terrifying, breathtaking, and all-too-plausible vision of the world's near future.

Unmanned weaponized drones already exist: they're widely used by America in our war efforts in the Middle East. In Kill Decision, best-selling author Daniel Suarez takes that fact and the real science behind it one step further, with frightening results.

Linda McKinney is a myrmecologist, a scientist who studies the social structure of ants. Her academic career has left her entirely unprepared for the day her sophisticated research is conscripted by unknown forces to help run an unmanned - and thanks to her research, automated - drone army. Odin is the secretive Special Ops soldier with a unique insight into the faceless enemy who has begun to attack the American homeland with drones programmed to seek, identify, and execute targets without human intervention.

Together, McKinney and Odin must slow this advance long enough for the world to recognize its destructive power, because for thousands of years the "kill decision" during battle has remained in the hands of humans - and off-loading that responsibility to machines will bring unintended, possibly irreversible, consequences.

But as forces even McKinney and Odin don't understand begin to gather, and death rains down from above, it may already be too late to save humankind from destruction at the hands of our own technology.

What listeners say about Kill Decision

such an exciting book ☺️. I was listening every moment I could and anticipate reading hardcopy to relive the excitement!

Starts out as really good science fiction, with some really great concepts on swarming and autonomous drone warfare, but then descends into a simple thriller novel. It might be worth the money for the first half

Not Daemon/Freedom, but still good Thriller

Would you listen to Kill Decision again? Why?

Yes, I like the realism of Daniel's books. He is able to craft a story that makes you believe that this could really happen!

Would you be willing to try another book from Daniel Suarez? Why or why not?

Definitely!! I absolutely loved Daemon and Freedom so anxiously awaited the release of Kill Decision to Audible. Although not in the same vein as the Daemon/Freedom books still a wonderful thriller that keep me on the edge of my seat.

*Spoiler Alert*Loved the chase scene with the Professor

I knocked out the whole book in one day. This a fun action packed adventure; not as thought provoking as daemon/freedom but still worthy of your credit. Excellent narration. Daniel Suarez is fast becoming one of my favorite authors because of his ability to integrate technology into the thriller/mystery category.

Long ago I found out about Audible on Leo LaPorte's TWiT netcast network. I read Daemon and Freedom(TM) and could not wait until the next work from Mr Suarez came out. Well on 7/19/12 Kill Decision was released on Audible. I wasn't scheduled for my next credit until the 28th, so I decided to go ahead and pay the member price and have instant gratification. I have yet to regret that decision as I have already read the book twice in 5 days.

Daniel Suarez is a very gifted writer that has gone from being self published (Daemon) to the heir apparent to Dan Brown. His ability to take present form technology, tweak it just a tad to keep it believable and wrap it in a layer of probable fiction is wonderful.

As with Daemon and Freedom(TM) the production standards are top notch and the narration by Jeff Gurner gives the story respect, enthusiasm and characters that not only seem real, but standing next to you.

There is a long lead time needed to get an idea into a concept and then to book form. I am guessing that this book has been evolving for a year or more. The execution of the topic of drones is well done and feels fresh and current. I think this book will have a very long shelf life before it starts to feel stale and outdated from a technology standpoint. There is a very heavy emphasis placed on the story line and technology supports the story without drowning it.

Another fine point of this author's skill set is that there is a fine line between relating what political realities are and preaching what they should be. Kill Decision strikes the right blend. I see no agenda in the story line and it makes for perfect reading in the morning, afternoon and evening.

I just hope that the people we send to Washington and the power brokers that control them are in no hurry to make this work of fiction classification into a documentary.

Now the real agony starts. What will Daniel Suarez come up with next and how long will it take to have it? In the meantime Suarez has provided us a trio of excellent techno thrillers that will be re-read with great pleasure.

Scary premise of technology and greed

I enjoyed Kill Decision from beginning to end. It's a scary world when people put greed ahead of human life. Unknown forces kill humans using technology so they can fuel an arms race and fatten corporate coffers. This story demonstrates the length some will go to serve their own interests and how far others have to go to stop them. Science in the book is plausible with a fair amount of literary license. All in all, very glad I listened to this book except for the cheesy sound bite at the beginning of each chapter. Very fine job by Jeff Gurner narrating this compelling book!

This was a lovely, fast-paced technothriller in the tradition of Michael Crichton. The science was really fascinating and it had all the twists, turns and deceptions you'd expect from a thriller of this sort.

The only reason I didn't give it a full five stars is because I found the main female character a little unevenly written. She seems to swing a lot between cowardly scientist and super-heroine, depending on what the plot demands at the moment.

Nonetheless, it was a good engaging read. Had me hooked and listening pretty obsessively all the way through.

The narration was pretty good. Not perfect, but definitely listenable and did not take away from my enjoyment.

Summer Read for Geeks without the Sleaze

The new one from Daniel Suarez is like watching a blockbuster movie over Memorial Day weekend to start the summer. "Kill Decision" is not as good from his previous titles, but if you are looking a summer read for geeks without the sleaze, then get this book.

In order to better understand this author, you need to pickup Daemon, and the sequel, Freedom (TM).

The best way to describe Suarez's writing is, think of a system administrator with an action pack thriller imagination, where you feel that you are on a roller coaster, but instead of holding onto your seats, you are in a mind storm ride, waiting for the seizure to stop.

WI/NWI-4 This book is masterful in how it uses cutting edge technology in fiction. I believe he has created a new genre called techno-thriller. Definitely WI (worth it)!

Plot-5 As always with this author, a detailed and amazing plot that relies on high tech knowledge. How can you guess where a plot line will go when you've never heard of the elements of the plot? The only thing I've ever read that is close to it it Prey, by Michael Circhton. Ingenious. 10 years from now, the techno aspects will no longer be amazing. Will the book be great then? It'll be interesting to see!

Characterization-2 Each character has an assigned name and expertise. They stick to their assigned professions, but they all seem like the same person, other than what they know and do. These books are not about character--they're about high tech and how it affects society.

Violence-4 A lot of shooting, but not a lot of blood.

Grossness-3 Not too bad. people get shot, people die, lots of people die, but it's not described in disgusting detail. It just happens.

Crossing the Line-0 Not really. This author stays within cultural okay-ness, and doesn't kill any dogs. Good for him!

Setting-2 Not any setting in particular, this is set all over the world. The paces are described well, tho, and were interesting. Just not enveloping.

Deeper Message-5 This book talks about sociology, and says that with technology, we could be returning to a feudal system of law. WHoever has the money will rule. Very interesting, and well presented.

Performance-5 Jeff Gurner does an amazing job reading all the techno words correctly. Just kidding, he delivers a great performance.

Builds with excitement and thrill!

Another fantastic book by Daniel Suarez, his accuracy in blending real world technology and hardware with such a great story line leads you to question yourself on what if this really happened, or has it already happened....better yet is it happening now.
The Narrator; Jeff Gurner does a fantastic job yet again for this techno thriller that will leave you fully immersed in the world feeling as if you living the story.

Odin, hands down the mysterious special ops figure you come to know, and question yourself initially, friend or foe...but his patriotism and loyalty to his comrades shines through in the story.

The cabin, where they had to repel a swarm of killer bots and survive.

Only needs one word to review this

Great story - and good characters. Unstoppable action and impossible to put down. You have been warned....

Mr. Suarez once again weaves technological advances into this thriller, but keeps things much more grounded in today's technical advances and challenges. This story features two main characters who could represent the first in a very successful series. If you like Vince Flynn, Tom Clancy, Brad Taylor, the characters and action should be to your liking. This is the first narration I have heard by Mr. Gurner, he strives (and mostly succeeds) in bringing nuance to each character he narrates. On occasion, it seemed he did not quite bring the same accent to a known character. Overall, I found him to be engaging as a narrator. If you are a fan of Suarez, this book will surely please, if you have tried his previous work and did not find it to your liking, I encourage you to give Kill Decision a try - I expect you will be pleasantly surprised