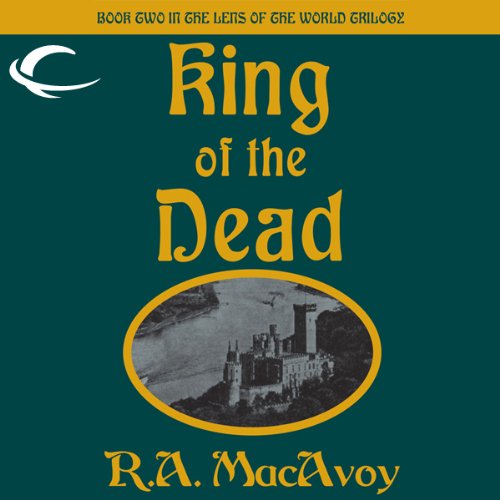 King of the Dead

An attack by paid assassins sets diminutive philosopher Nazhuret and his lady, Arlin, on the road to Rezhmia, a fearsome neighboring kingdom to which Nazhuret is tied by ancient blood.

What listeners say about King of the Dead

It's more about the journey than the destination.

This review will contain a few spoilers for R.A. MacAvoy’s previous book, Lens of the World. You’ll want to read that book before beginning King of the Dead.

King of the Dead is the second story in R.A. MacAvoy’s LENS OF THE WORLD trilogy about Nazhuret, a man who is writing his life story for his friend, the king. When we met Nazhuret at the beginning of Lens of the World, he was an ugly orphan who had been raised in a government military academy. Upon reaching his majority, he left and became an apprentice to Powl, a man who is much more than the lens grinder he pretends to be. Powl thoroughly educated Nazhuret in a multitude of subjects and disciplines. Only toward the end of that first book do we realize why Powl took an interest in an ugly orphan — he recognized Nazhuret’s unknown bloodline and realized that the orphan has an important destiny. At the end of the book, Nazhuret and Arlin (the girl he loved as a child who ran away from home and has been masquerading as a man) perform a noble deed that earns them the love and trust of their king forever.

King of the Dead begins a few years later when Nazhuret and Arlin are living in obscurity because Nazhuret is the rightful heir to a duchy that was conquered when his parents were killed. Nazhuret has no wish to rule, but he needs to stay out of the way of the current duke. When someone sends an assassin to kill Nazhuret, Arlin, and their unborn baby, they are uprooted and thrown into the midst of political turmoil. Can they, once again, use their special skills, wits, education, and family ties to save their kingdom from invasion?

Readers who enjoyed the slow leisurely pace and the beautiful prose of Lens of the World will enjoy King of the Dead for the same reason. Readers who are in the mood for lots of fast-paced action should look elsewhere. This is a slow moving story in which not a lot actually happens. It’s more about the journey than the destination. We spend a lot of time in Nazhuret’s head — he’s introspective, curious, and thoughtful. He has interesting observations about the world and the people who inhabit it. We might spend a week with Nazhuret as he’s riding a horse across a barren wasteland, but somehow he manages to keep us entertained just with his thoughts. A lot of this has to do with R.A. MacAvoy’s writing style. It’s so lovely and absorbing that I hardly notice that nothing is happening. This is a story for readers who like to linger over a sentence and admire its construction, for every single sentence in King of the Dead is lovingly crafted.

It’s hard to compare this series to anything else you may be familiar with because it’s unique, but the best comparison I can make is to Robin Hobb’s FARSEER series. There’s a lot less plot here, and the characters aren’t as endearing (and there are few of them, especially women), but its protagonist is similar (an introspective coming-of-age young man who isn’t what he seems and is completely misunderstood) and there’s a similar sense of tragedy and cosmic injustice. Also, the writing styles are comparable — first person POV with elegant but succinct sentences. I’d recommend the LENS OF THE WORLD trilogy to Hobb fans who love her style and wouldn’t mind a fairly slow plot.

The audio versions are produced by Audible Studios and narrated by Jeremy Arthur. I thought he was the perfect narrator for this story. King of the Dead is 9.5 hours long.

slightly better than book one

slightly better story than book one, although the narration still is lackluster. barely good enough that I feel like I need to finish the series.

It's a good story, but the reading is a bit iffy.

MacAvoy's zen practice really comes through in this and the others in the trilogy, where the backdrop of politics in fantasy-Renaissance Europe/Middle East isn't... pointless... but certainly is a supporting element to the main line of the protagonist's spiritual experiences. About the closest likeness I could come is Rudyard Kipling's Kim. While this book isn't my favourite in the trilogy, it still stands up well on the reread (listen) and certainly worth a try.

Jeremy Arthur's reading is... okay, but not great. He frequently mispronounces "cavalry" which is sad because it comes up a lot, and there are parts where there is an obvious rerecording tipped in to replace an existing passage, and the difference in volume is jarring. It's not that hard to level the volume, and I'm disappointed that the production team was this sloppy. He does okay with character voices, but his description and action scenes are a bit dry.