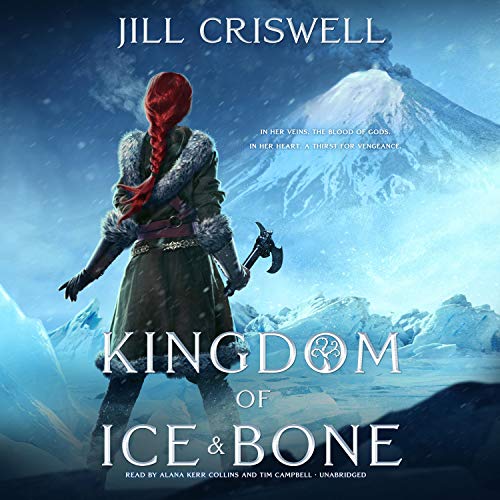 Kingdom of Ice and Bone

Lira and Reyker have lost everything. Including each other.

Lira of Stone watched her home burn and her clan fall beneath the sword of the warlord known as the Dragon. She believes the man she loves, a warrior who defected from the Dragon's army, is dead. Alongside her exiled brother and his band of refugees, she will fight the forces that conquered her island. But the greatest danger may come from Lira herself - with the blood of banished gods running through her veins, she's become a weapon, and no one is safe from the power of her wrath.

Reyker Lagorsson thought he was done being a Dragonman. That was before he saw Lira leap from a cliff and vanish into the sea. Determined to honor her memory by protecting her people, Reyker must feign loyalty to the warlord, undermine him at every turn, and seek alliances with renegade soldiers - without succumbing to the battle-madness that threatens to possess him once more.

When the Fallen Ones offer Lira a chance to defeat the Dragon, her quest leads her to a place she never expected - Iseneld, the warlord’s homeland. Her journey into the heart of the Frozen Sun will put her on a collision course with Reyker, costing both of them more than they ever imagined, and leaving her with a terrible choice: To save their countries, she must forsake everything she loves.

What listeners say about Kingdom of Ice and Bone

I loved the first book. it was filled with such Love and Hope . I couldn't wait to get to the second book. This book was so sad, so heart breaking it! I just kept waiting for it to get better for them to find each other and find love again. needless to say that never happened . it ripped my heart out every single page. Do not listen to this book! I certainly won't listen to another one by this author.

completely aggravating to get through.

in the first book there were things stated, such as how they can always feel each other and would know if they were dead, yet 3/4 of this book they both think the other is dead and are second guessing everything. I pushed through... hoping the ending would be worth the aggravation. nope. it wasn't. worst ending ever.

I really enjoyed this story until I realized that everything the characters were going through was for nothing.

If you like a book where the main character totally gives up and goes to the bad side, the side she fought the entire series against only to end up giving up all hope, all love and surrendering to evil then this is your book. Even if there is another book and she does go back to the good side it will be to unbelievable and to far fetched to make since. The ending in this book stresses and leaves you believing that all hope is lost and love is meaningless. Such a wonderful storyline with such a god awful ending. So disappointing.

I really liked the characters and the storyline. It kept my interest and for the most part easy to follow (some of the gods storylines may have been a little difficult to keep straight at times)The narrators were awesome (which we all know, can make or break an audiobook). Looking forward to the next and final book

I loved the characters and I did not get bored with the story, this is a really good book

Too much of what I dislike in plot

Assumptions, no communication, being plain stupid. It's an annoying plot propelling device often seem in YA novels and literaly this entire book, it was madening. Adding to that the constant yo yo of escaping, getting caught, escaping, giving in, escaping, giving in for the same reasons as the last 3 times you escaped and gave in. I was really finding one difficult to get through. Hoping the next is better and I don't yell at my book lol

I liked the first book. Struggled with this one and finally gave up. Transitions were not clear and too many times I felt like I missed something, backed up only to realize I didn't.... it just wasn't there. I think with some more editing this could have been much better.

mad I put up with book 2

the girl is a dimwitted idiot. I won't even finish it. Can not believe I gave book 2 a chance even when book 1 was painful to listen to. All losses no wins, and 2 people with abilities and yet lose at every turn. I'm really annoyed at how awful this continues to be and dragged out.

Well written, but no happiness in this story

if you don't care for outcome of story, happy, sad or whatever this is the story for you but you like happy-go-lucky story this isn't that