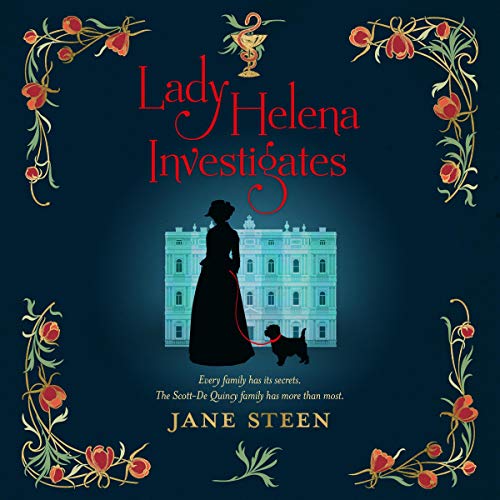 Lady Helena Investigates: Book One of the Scott-De Quincy Mysteries

Written by: Jane Steen
Narrated by: Elizabeth Klett
Try for $0.00

A reluctant lady sleuth finds she's investigating her own family.

Step into Lady Helena Whitcombe's world with the first novel in a series that will blend family saga and mystery-driven action with a slow-burn romance in seven pause-resisting investigations.

Sussex, 1881. Lady Helena Scott-De Quincy's marriage to Sir Justin Whitcombe, three years before, gave new purpose to a life almost destroyed by the death of Lady Helena's first love. After all, shouldn't the preoccupations of a wife and hostess be sufficient to fulfill any aristocratic female's dreams? Such a shame their union wasn't blessed by children...but Lady Helena is content with her quiet country life until Sir Justin is found dead in the river overlooked by their grand baroque mansion.

The intrusion of attractive, mysterious French physician Armand Fortier, with his meddling theory of murder, into Lady Helena's first weeks of mourning is bad enough. But with her initial ineffective efforts at investigation and her attempts to revive her long-abandoned interest in herbalism comes the realization that she may have been mistaken about her own family's past. Every family has its secrets - but, as this absorbing series will reveal, the Scott-De Quincy family has more than most.

Can Lady Helena survive bereavement the second time around? Can she stand up to her six siblings' assumption of the right to control her new life as a widow? And what role will Fortier - who, as a physician, is a most unsuitable companion for an earl's daughter - play in her investigations?

A new series by Jane Steen, author of the House of Closed Doors series that has delighted thousands of fans. If you're looking for a pause-resisting Victorian mystery saga, here's where you start!

What listeners say about Lady Helena Investigates: Book One of the Scott-De Quincy Mysteries

This is no cookie cutter "widow delving into the suspicious death of her beloved husband." It's a story of dementia slowing taking away your mother her history, and of stories never told. Of dealing with a large family, in such times. I feel I really got to know the Scott-DeQuincys' . I can't wait for the next installment.

This is not really a mystery and Lady Helena doesn’t do much “investigating.” Its disappointing as a romance as there is very little interaction between the couple. It is something of a “coming into her own” story as told in a series of loosely related incidents that are sometimes interesting on their own merit and as summed up in the last speeches. It is way too long and didn’t keep me interested. I kept waiting for everything to come together into a solid story but it didn’t happen. The narration was OK but a little forced. Seemed to take forever for the book to end.

I didn't even finish. I kept waiting for Lady Helena to investigate but that never happened. This was a lot of narration about the family members, descriptions of her mother's dementia, the landscape, etc, all strung together with no purpose. Lady Helena has an obnoxious bossy younger brother that she doesn't stand up to, along with other family members who are always complaining about money and asking her for financial help which she gives. I found it all very annoying. The "mystery' was resolved in Chapter 25 (out of 34h) by a death bed confession (not investigation), and when nothing else happened in the next couple chapters I gave up and returned the book. There are other much better British mysteries of the same time period with much stronger and more interesting women characters.

Not a true mystery as a problem isn't known until it's confessed. Not a romance novel, no "thriller" aspect
It's a different sort of story. A good read, even if it's lacking in luster.

After listening to this"MYSTERY NOVEL" IN ITS ENTIRETY, I WAS EXTREMELY DISAPPOINTED!!!!!!
after the main mystery being solved with three hours left in the book I knew that I had chosen it this really should be more of a book under the genre Romance! I do not want to give anything away just take my word for it I have over 400 books from audible 95% of the Mysteries!!!!!

This was a charming story with not too much drama which I do appreciate right now. I like to escape into a novel with my head phones on while I am cleaning or when I need a rest. I didn't start out thinking that this book would have a lot of substance but it grew on me as the story became more complex. I gave it a five because it took me peacefully away from worries about family and friends who are alone in this solitary time. So I am grateful to the author for that and I really do hope we will see more of Lady Helena as she grows into her real self.

Interesting first book in this series

Good story, sympathetic heroine, excellent narration. I’m looking forward to the next book in order to follow the life and investigations of Lady Helena and her family members.
Thanks Jane Steen and Elizabeth Klett.

I have just finished listening for the second time, thinking I should give this book a second chance, but nothing can erase that stain of going too far. I would appreciate warning of unsavory subjects such as incest prior to buying a book. There is good character development and interesting plot building but I draw the line at deviant sexual behavior. It’s the author’s prerogative, of course, but mine to choose if I want to listen. Elizabeth Klett, on the other hand is an excellent narrator

Slow start but good as it developed

Elisabeth Klett is the best narrator and I picked this up because of her reading. It was slow developing and the lead character was frustrating at times but the story developed nicely.