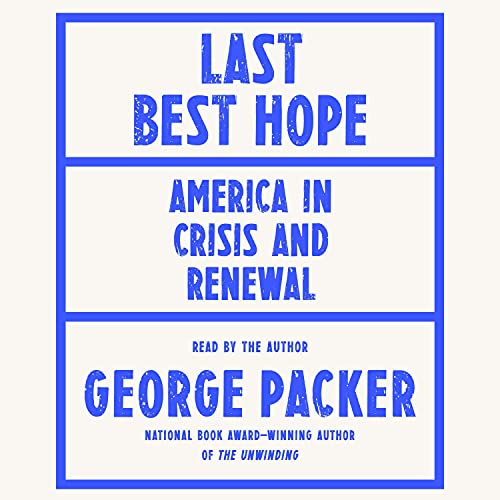 In the year 2020, Americans suffered one rude blow after another to their health, livelihoods, and collective self-esteem. A ruthless pandemic, an inept and malign government response, polarizing protests, and an election marred by conspiracy theories left many citizens in despair about their country and its democratic experiment. With pitiless precision, the year exposed the nation’s underlying conditions - discredited elites, weakened institutions, blatant inequalities - and how difficult they are to remedy.

In Last Best Hope, George Packer traces the shocks back to their sources. He explores the four narratives that now dominate American life: Free America, which imagines a nation of separate individuals and serves the interests of corporations and the wealthy; Smart America, the world view of Silicon Valley and the professional elite; Real America, the White Christian nationalism of the heartland; and Just America, which sees citizens as members of identity groups that inflict or suffer oppression.

In lively and biting prose, Packer shows that none of these narratives can sustain a democracy. To point a more hopeful way forward, he looks for a common American identity and finds it in the passion for equality - the “hidden code” - that Americans of diverse persuasions have held for centuries. Today, we are challenged again to fight for equality and renew what Alexis de Tocqueville called “the art” of self-government. In its strong voice and trenchant analysis, Last Best Hope is an essential contribution to the literature of national renewal.

Excellent analysis of complex problems in US.

While George Packer’s Last Best Hope received a glowing review in The Atlantic, the actual reading of the book left me disappointed, coupled with a bit of depression and anger for having hoped there was some semblance truth to be found. If one is seeking an intellectually honest assessment of the profound political, cultural, racial and economic divide in the United States, Mr. Packer fails miserably. He engages in a narrative which ridicules conservative ideology born of classical liberalism while offering zero critique of the left, its abandonment of liberal tradition and its attraction to an authoritarian utopia. If you agree with Marx and Engels assessment of class struggle, you’ll love Packer.
In short, Mr. Packer has published a rambling, at times slobbering, diatribe, dripping with contempt for anyone who has a different world view than his own.

This is us decoded—who's up to that task?

America, this is you; this is us decoded. No matter who you are, or what your socioeconomic perspective, George Packer provides in this book the most insightful explanation I have seen of why some people behave in inexplicable ways and believe in demonstrably false premises. Avoiding the posture of a progressive rant against the usual suspects, Packer effectively presents an objective break down of how American democracy is in fact in peril—from forces that were active even prior to the founding of the United States.

Packer documents well the fissures throughout American history, categorizing four recognizable groups in our contemporary time:
1. Free America, as in neoliberal and libertarian, I've got mine and your problems are your own fault, and concern for individual freedom overrides any recognition that the actual market is far from free.
2. Smart America, I've got the creds at least in my narrow specialty, a world where skewed meritocracy is simultaneously foundational and precarious, and why can't everyone else be smart like me (emphasis on like me).
3. Real America, basically rural whites and others who think like them, often whose sense of reality is conjured by right wing media, a world of cohabiting inferiority and superiority complexes, where loyalty overrides logic.
4. Justice America, the driver of identity based cancel culture that has jumped the fence of academia and infected business and society in general, although properly promoting marginalized groups sometimes ignored by preceding Liberals they are selective themselves on which causes to champion, refusing the wisdom of progressive giants in history in emphasizing separate identity over common economic justice.

Packer's antidote for these fissures is the art of self-government, explained as community interaction at the local level—which would provide the foundation for healing at the state and federal levels. This would be accomplished by people of the different categories interacting with each other on matters other than what separates them—with the intended result that they begin to see each other as fellow humans. This cannot be just "both sidesism," as one can still affirm another's human agency without legitimizing their false premises.

I found this book short on solutions to the problems Packer so skillfully describes. All the human interaction that is possible is still limited as long as well funded promulgators of fallacy based propaganda continue to influence large sections of society. Those in each category will need to see those in the other categories as fellow humans, looking past their (obvious to themselves) ignorance and intolerance. Someone or something will need to facilitate such inter-category interaction—who's up to that task?

Is it possible for any human being to accurately sum up a society as conflicted and contradictory as ours? I'm doubtful, but George Packer's book is insightful and thought-provoking. My favorite chapter was the one called Equalizers, in which the author tells the stories of three American reformers (Horace Greeley, Frances Perkins, and Bayard Rustin), reflecting on their times and making trenchant comparisons to ours.

concise. but covers enough history to gather the many threads as to the who, what and whys.

Occasionally, a book comes along that lays bare our greatest vulnerabilities, our subdued prejudice, and our propensity for denial and self confirmation. This is that book. It does not spare anyone of the blame for our current situation and speaks truth to bull$#!+ in a straightforward and efficient manner that I have not seen in a long time. I feel convicted and inpsired and I am grateful for the authors courage in saying the things that need to be said. This book is a truth bomb and it deserves to be read and fully considered. May God bless George Packer for writing this outstanidng work.

Packer has written a well researched, positive review of todays America. He makes a strong argument that we are the world’s best hope.

I intend to listen to this book many times. I encountered so many gems of wisdom that I was unable to process because the next brilliant insight was around the corner or on the next digital page. I read this book having been on acquainted with George Packer but he has earned a devoted follower with this outstanding synopsis of our current culture as well as outlining a way forward.

The author — an elegant craftsman in print as a frequent contributor to both the New Yorker and The Atlantic — describes the 4 Americas clearly and thoroughly, with a empathy for how they reached that point, but with pointed criticism for each — particularly for “Just America,” the current identity politics of the left. The other three — Free America (libertarians), Smart America (neoliberal meritocrats), and Real America (the identity politics of the right) are covered as well, and seem essential to understanding the divisions and resentments across our society.

When Packer then gives an overview of three progressive voices through other precarious stages in American history (Horace Greeley, Frances Perkins, Bayard Rustin), it’s interesting and well-written, but unclear why this is being included. It seems more as if this should have been a standalone magazine article. Finally, the last section prescribes a number of bold policy recommendations — breaking up the current monopolies such as Amazon, Google and Walmart; mandatory national service; nationally or statewide funded education decoupled from property taxes, etc. I can agree with all of it, yet was hit with the sinking feeling of hearing yet another politically unattainable list of great ways America could move forward. But, as I say, it’s well-written and the societal commentary is worth it alone.

Packer is an angry hack who spends half this poorly-written book on Trump. Bad writing usually comes from bad thinking, and Packer admits his mind suffered during Covid. His categories of Americans are cheap stereotypes. The only thing he gets right is the obvious: education matters, but he does not hold the Ivy League accountable for its dangerous Woke politics or refusal to admit more Southern students. Nor does he address the lack of trade schools needed to supplant the pervasive fallacy that a 4-year+ college education is necessary for economic success. Painfully myopic, Packer knows neither America nor other countries, so please don’t give this benighted, parochial, Covid-and Trump-deranged bigot your time. I’m sorry I wasted mine on his words.