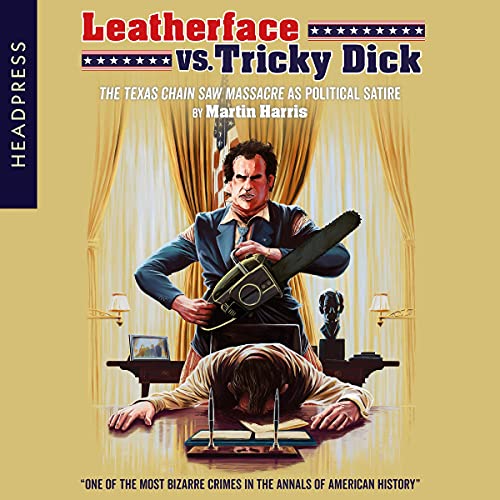 Written by: Martin Harris
Narrated by: Jerry Bradshaw
Try for $0.00

The Watergate scandal was a horror show. What better way to satirize it than with a horror movie?

Tobe Hooper's The Texas Chain Saw Massacre premiered in October 1974, mere weeks after the resignation and pardon of Richard Nixon brought an uncertain end to the most corrupt and criminal presidency in American history. The film had been conceived, written, shot, edited, and produced precisely as Watergate was playing out, and those responsible for Chain Saw unhesitatingly spoke of the horrors of contemporary politics as having directly inspired the ones they created for the film.

Leatherface vs. Tricky Dick presents a fascinating minute-by-minute exploration of the many uncanny connections between The Texas Chain Saw Massacre and Watergate, as well as other ways the film comments on contemporary politics via satire and (very) dark humor. Listen and discover Chain Saw’s response to the White House horrors, the Saturday Night Massacre, and more, as well as how Leatherface’s masks relate to all those Nixon masks worn throughout “our long national nightmare”.

What listeners say about Leatherface vs. Tricky Dick

Not as Silly as I Feared

I was expecting this to be some far-reaching, fantastical nonsense somebody dreamed up, making loose, tenuous connections. I was truly surprised by the solid research, logic, and sometimes even confirmation from the screenwriters about deliberate connections. Very interesting read.