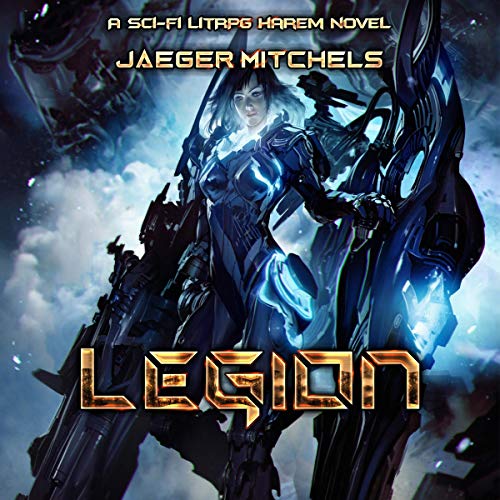 Written by: Jaeger Mitchells
Narrated by: Kyle Westmaas
Try for $0.00

Between Heaven and Hell, we are Legion.

Life isn’t what it used to be in Earth’s megacities. Finally, having enough of eating crumbs and trying to stay alive, I decided to take hold of my destiny and join one of the space-faring legions. Getting accepted into a legion turned out to be a hell of a lot harder than I thought - until I met the Devil himself.

Signing a contract and offering my soul in exchange for a chance at escaping Earth and a promise of power, I left it all behind only to find myself in a far worse situation among the sadistic officers aboard the Steel Legion.

After a gruesome turn, a chance for revenge comes along and gives me the opportunity to take care of the corrupted group of officers and their followers and ending their evil ways. However, the awakened monstrosity that I’ve become is an extremely important chess piece in this epic game between Heaven, Hell, and Earth’s forces. They will stop at nothing to retake me and the Legion, dead or alive.

What listeners say about Legion

the story is all over the place

so much happened so randomly. it's almost like a regurgitation of the author's power fantasy in audio form

Can barely be considered LitRPG

First of all, if you are looking for even a minimal amount from the LitRPG genre, this book is not for you. Only a select few (less than a dozen), in the entire book, have access to the ability to "level". It is actually called a 'rank up' and the abilities a person receives is different from person to person. They are given 2 new skills at each new rank. It is not even really a choice on which skill is better than the other, since a person can change the selected skill once per day. The way a person "ranks up" changes from person to person. Some include sex, to be beaten to a bloody pulp, knowledge, and the MC needs to feast on the heart and brains of people. The entire leveling process seems a bit arbitrary and I, as the reader, have no idea if a person is close to ranking up or if they are a long ways off.

The MC is not very likeable. He, at least to me, seems sexist, a bit of a pig, and a bit wishy-washy. This coupled with the fact that he becomes a mass murderer, planet killer, and cannibal, while still trying to portray him as the "good guy" is kind of upsetting. When he is in fact the "good guy" as compared to everyone else, just makes the entire thing depressing. The MC makes a deal with the literal Devil not once but twice, and then tries to go back on the deal and is upset when the Devil has him perform evil actions. He says that he wants to be a good guy and fix the wrongs of this universe, but then kills 14 Million (maybe Billion as I can't really remember off of the top of my head) innocent SENTIENT creatures by destroying the planet they are living on.

A major part of the world is that angels and other celestial beings must keep their word. Should they break an oath or promise, there power will be severely weakened. The MC eventually becomes one such being and yet consistently breaks oaths by defying the promises he made to the devil. According to what was explained to us, the reader, this should have caused some major issues for the MC, but he seems to be unaffected by the system.

The narration was wonderful, especially when there is such a large cast of characters. However, the book itself does not follow any logic and the "rules" of the universe don't seem to apply to the MC, which is incredibly frustrating. I will not be purchasing book 2 of this series.

I stuck with this book all the way of part one, but it felt like it never took off. The characters where flat, the story was lack luster, and the voice acting for several of the characters was grating.

The book was neat and had some really cool ideas. Just felt a bit overstuffed from getting new things without developing the old things. The characters in the story are a big one dimensional as well. It was an awesome story though with interesting progression ideas and narration was great.

Legion is a self-contained dark sci-fi tale with gamelit and harem elements. The main character is trying to be a good man and leader while fighting for freedom and independence from the corrupt forces of Earth/Humanity, Heaven and Hell after he makes a literal deal with the Devil. Plenty of action (gets a bit gory in places) and what may be commentary by analogy on politics, business and religion as an individual fights for free will, free thought and decent treatment for himself and those who want it. Good for fans of space-opera sci-fi and LitRPG/Gamelit as long as you can stand (or are a fan of) occasional gore and harem scenes.

Disclaimer: I was given a free review copy audiobook at my request and have voluntarily left this review.

This is an interesting blend of space sci-fi and religious themes,
The story did get gory in sections, and went quite dark.
In some ways it was like listening to someone play a video game, but i think that is part of the sub-genre of LitRPG.
Over all i did like the book, and I'm wondering if the author will continue the story in a sequel, there is definitely enough material left for at least one.

A deal with the Devil, how could that go wrong?

A deal with the Devil, Alien allies and enemies, mechanical intelligence, and a battle between Gods this LITRPG Space Opera has it all. The warning on the book clearly states that there are no explicit sexual scenes and while that is true reader be forewarn this book has a harem in all except the explicit details.

Cain a drunk living in poverty makes a deal with the devil to get himself into the Steel Legion with a promise to give him a chance to be given an Armament. Thrust into the Legion into less than ideal circumstances Cain trie to make the most out of his situation but soon finds that he cannot tolerate the holier than thou arrogance he gets from some of the people in charge. At every turn Cain seems to gain new abilities and new enemies in equal measures. This book was given to me for free at my request and I provided this voluntary review.

If you like Space Operas and LitRPG and can tolerate (or enjoy) some harem aspects this is the book for you. Devin Cain does a good job at weaving an ever evolving tale with some interesting but yet familiar Mythos.

great world building and movment in storyline the character development is alittle weak but the story and world really help cover that small flaw. not big on gods and godesses but again great pace that drags the reader i. really looking foward to book 2

Interesting premise, poor execution. Flat one dimensional story and characters. Unfleshed out, unrelatable characters.inorganic interactions. Good world building but too much info dumping of unrelated information fluffing the story up while failing to develop or build upon previous information that might have been relevant. Definitely a power trip fantasy with scifi and harem story aspects touching lightly upon litrpg grimdark aspects. He literally made a deal with the devil multiple  times, murdered countless innocents, and was a cannibal yet still wants to be the good guy who fixes things? crude and gorey at times, which if this story was written different would have been fine but as it is currently written its unnecessary. Weak undeveloped commentary regarding politics, business and religion that would have been interesting if better fleshed out, all done while the characters fight for what they percieve as free will/thought and proper treatment. Very few people are able to level up/rank up/access/use the litrpg elements in this story which is ok but the system was ill defined. The litrpg element didnt really seem to hold much flesh in the story, there was no real push to get the right skills the first time, as you could change them daily if needed.i wanted to like this as it showed a lot of promise but it needs a serious overhaul.
The narrator was ok. Small vocal range and weak enunciation at times with a borderline nasally voice. Ok pacing

Is he an alcoholic alpha male or a “nice guy” who has never touched alcohol? Does he like killing and oppression or does he hate violence and people having power over others? You’ll never know because it changes.

In the end I think he is the (not literally) trench coat and fedora wearing “nice guy” who says “whatever” every 5 minutes who has adhd.
Kinda like the book steel world but the MC is cringe worthy AF. I would love to see more of this world with angels and demons and gods.

Narration is ok, he has small issues here or there like: so and so is screeching in a high pitched voice, and the narration is still deep and calm. Or someone says “you’re souly mistaken” instead of “your sorely mistaken”.