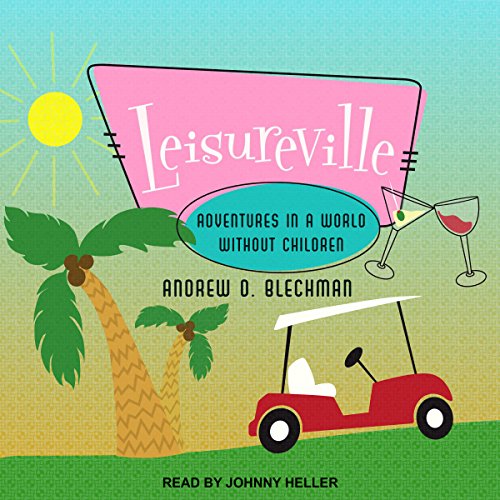 When his next-door neighbors in a quaint New England town suddenly pick up and move to a gated retired community in Florida called The Villages, Andrew Blechman is astonished by their stories, so he goes to investigate. Larger than Manhattan, with a golf course for every day of the month, two downtowns, its own newspaper, radio, and TV station, The Villages is a city of nearly 100,000 (and growing) missing only one thing: children.

In the critically acclaimed Leisureville, Blechman delves into life in the senior utopia, offering a hilarious firsthand report on everything from ersatz nostalgia to the residents' surprisingly active sex lives. But this is more than just a romp through a retirement paradise; Blechman traces the history of the age-segregated retirement phenomenon, and travels to Arizona to show what has happened to the pioneering developments after decades of segregation.

A fascinating blend of serious history, social commentary, and hilarious, engaging reportage, Leisureville is an important book on a major, underreported trend.

What listeners say about Leisureville

Interesting overview on a social experiment .

This lifestyle has never held an appeal to us. We as retired boomers have visited friends in gated, contrived, white, right wing Florida retirement communities and it never felt like it was a good fit for us.
We prefer to stay with our wide age and socio economic range community, our schools, school buses, strollers, playgrounds, bikes, laughing kids, snow and ice and spectacular fall colours. We will continue to pay school taxes to the local school board who educated our children and grandchildren.
Clearly this type of lifestyle meets the needs of many retirees and I wish those people well. Socialisation is powerful medicine. Not everyone has the benefit of family nearby. However there appears to be a need for a lot more transparency and flexibility in some of living arrangements and contracts .

I wasn’t surprised to find that there was a lot of variation of the views of the residents of the Villages except for the unified conservative beliefs they hold dear. This is explained, largely, by the endless flow of propaganda from the local newspaper and radio station.
Would I live in the Villages after reading this? I don’t know !
It was a good book and I am glad that I purchased it.

Johnny Heller - accents are NOT your strength!

First of all, when you're the narrator, Johnny Heller, trust me: DON'T attempt accents. They are NOT your strength. "Boston" was overdone but when you did "Working class British" the pain began, and worst of all was "Australian" -- tragic!! And one more thing: the correct pronunciation of "aquifer" is aqui -- fur, as in "fur coat", NOT aqui- FIE - r, as in "wood fire" -- okay?!!

The author is speaking negatively about age preferred communities . He's not quite 40 yrs old so he is prejudiced against them. The millions of people who live in them choose to for very valid reasons. I live in an age preferred community and have spent time at The Villages.
Some of hiis facts and numbers might be accurate about the developments he mentions. Bottom-line, it's like a young child telling their parents what's good for them when they don't have the wisdom and experience of their elders.
Not all that entertaining to listen to the narrative being conveyed.

This is a fascinating and well crafted piece of journalism.

The author's choices when talking about queer and trans people, though, made me cringe. This is a book that would have benefitted from an editor who isn't living in a retirement community. I'm convinced the author means well, but he sure goes out of his way to make that unclear.

It's worth reading. But you'll feel a bit embarrassed on the author's behalf while reading it.