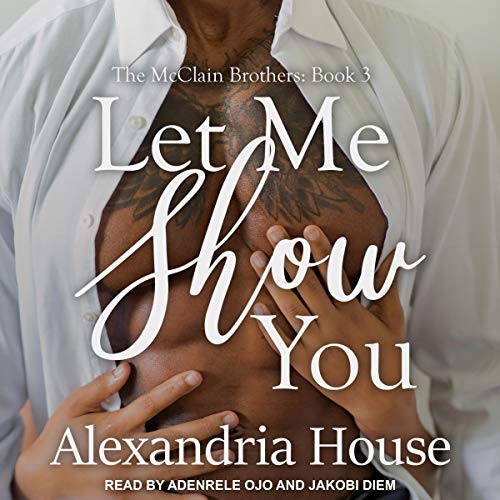 Let Me Show You

Nolan McClain is the smart one, the driven one, the one who goes for what he wants, meticulously plans his steps, and thinks he has his life all mapped out...until he lays eyes on Bridgette Turner.

Bridgette Turner is just as driven and focused as Nolan, but when her past comes back to haunt her, she finds herself knocked off balance and all her hard work in jeopardy.

What Nolan feels for her is real, but Bridgette is skeptical. Will she let him show her his heart?

What listeners say about Let Me Show You

These series of the McClain brothers were phenomenal!! I loved each and every couple and that darn uncle Lee is to comical. He had me dying laughing at work. I especially loved the readers of this audio for the series, l could listen to them all the time. They made series come to life. Awesome job!!!

So far I am enjoying this series. The only 1 thing I would change would be the people speaking the book because after book1 you associate their voices to those characters.

This book was just okay. It seems to have the exact same theme as the others, except these characters weren’t Interesting.

I liked the first book. But these last 2 books are pretty much the same blueprint as the first. There’s really no true twists to keep one engaged. Honestly my goal became to just finish it.

what a great story about good men

OK Ms. House...We need Neil and Sage to work it out and real quick please!

I need more siblings, love these good black love stories! With just enough real ness but ultimately being nothing but love! Love these books Ms. House! So now I need you to create long lost brothers so the stories can continue lol!

These books are all starting to sound the same. They all read the same. Everyone has the best sex....we know this is not true.

Loved it the narrators pulled you into the story. Can not wait for next book

I need to find an extra Mc Clain brother with Jakobi Diems's voice then all will be right with the world. Oh and Uncle Lee.

I thoroughly enjoyed it, I laughed, I cried, and then laughed, Uncle Lee Chester needs his own book, and he's freakin hilarious, imma start answering my phone "What up there now ", about to start book4, BTW this can easily be a series, I love Bridgerton, but this series would go hard, I'M LOVING THE BOOKS SO FAR.