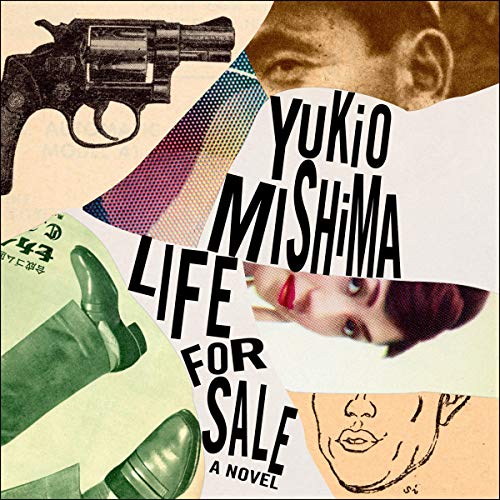 Written by: Yukio Mishima
Narrated by: Kotaro Watanabe
Try for $0.00

After botching a suicide attempt, salaryman Hanio Yamada decides to put his life up for sale in the classifieds section of a Tokyo newspaper. Soon interested parties come calling with increasingly bizarre requests and what follows is a madcap comedy of errors, involving a jealous husband, a drug-addled heiress, poisoned carrots - even a vampire. For someone who just wants to die, Hanio can't seem to catch a break, as he finds himself enmeshed in a continent-wide conspiracy that puts him in the crosshairs of both his own government and a powerful organized-crime syndicate. By turns wildly inventive, darkly comedic, and deeply surreal, in Life for Sale Yukio Mishima stunningly uses satire to explore the same dark themes that preoccupied him throughout his lifetime.

"Funny and horrific and curious and thoroughly entertaining.... [Life for Sale] should win Mishima a new generation of fans." (The Independent)

"This dark, funny social satire feels like something only Mishima could’ve written.... A slapstick comedy with a complex moral underpinning, and an intriguing departure from his introspective work.... Mishima’s pungent insights into the challenges of postwar Japanese life are threaded brilliantly throughout." (Publishers Weekly)

"An eccentric satire.... [An] offbeat, sardonic yarn about self-commodification and its discontents." (Kirkus Reviews)

What listeners say about Life for Sale

I love the concept the story is based on, the situations the character finds himself in and the overall premis of the story is very thought provoking. The sense of nihilism and inevitability is captured really well by the narrator and I look forward to listening to more of both the narrator and author.

Good story but accent makes it hard to listen

The story is entertaining and well worth experiencing, but I had to write a review to penalize the narration. The narrator has a pretty thick Japanese accent - for example frequently conflating the 'l' and 'r' sound. It can be distracting to hear him, for example, pronounce "concrete" as "conclete" and for me it breaks the immersion since it takes extra effort to understand. The reading is overall well done besides that and I still enjoyed it, but it's unfortunately not up to the standard that it should be.

Mishima, like Graham Greene, wrote two types of novels -- "serious" ones and ""entertainments." This is in the latter category. And I'm not sure if it even succeeds at that. It's an absurdist tale that is only marginally interesting. Every so often, though, we get flashes of Mishima's brilliance and for that reason, provided you're a fan of his, you should give this a listen. Otherwise, this will almost certainly disappoint. I have to say, too, that while the narrator speaks English well, it is not his first language and he does have trouble pronouncing a few words. (Definitely listen to the sample.) This might not be fair, but Mishima spoke English with very little traces of a Japanese accent (if he had one at all), so I don't think the narrator was the best choice for this book.

I loved every character and just ate this novel up.
Fantastic escapism.
The narrator was fantastic, his Japanese accent made the listener feel more impeded in the culture and scenes.