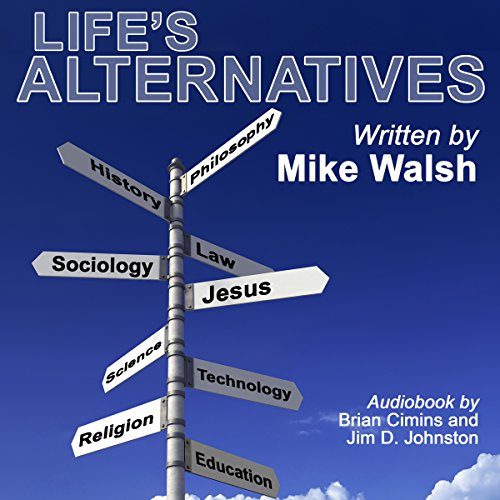 What is your life philosophy? Does it offer you real fulfillment? What happens when we die?

In his book, Life's Alternatives, Mike Walsh poses these questions in his investigation of the reigning philosophical worldviews on topics ranging from politics to pop culture. As he examines what the various approaches have to offer, Mike lends his insight into what will inevitably grant people the answers they seek.

The author writes, "I was living life, chasing success, liberty and the pursuit of happiness, aka The American Dream. A man named Solomon had done the same thing thousands of years ago. He was a king who had settled an argument between two women in a dispute over a baby. In the Holy Bible, in a Book known as Ecclesiastes, I learned Solomon was the wisest man who had ever lived. Reading that book made me realize that we both came to many of the same conclusions by age 30. In addition to being wise, Simon was also unimaginably wealthy. He had the resources to acquire anything he wanted to make himself happy and he did. After trying all there was he used a few magnificent statements to describe the results: 'chasing after the wind', and 'nothing new under the sun', and the most devastating of all 'futility or meaninglessness'. Very few will ever have the chance to try all the things that Solomon was able to try. Yet, at the age of 30, I had tried enough to suspect that the last guarantee in the Bill of Rights, allows us pursue it, there’s no assurance that we’ll ever get it. Out of all this, I arrived at a way of thinking that I call 'default reasoning'. When trying to make a decision about something, I ask myself: What’s the alternative? This type of reasoning has kept me from making ill-advised choices. Hence the title of this book, Life's Alternatives. It is my hope that by hearing or reading the counsel of this volume that you may avoid some of the pitfalls of life and perhaps find an answer to the question 'What’s it all about, Alfie?'"

What listeners say about Life's Alternatives

Jesus is the Way, the Truth and the Life

Wonderful book that inspired many to want to encourage a brother in Christ, a Shepherd for the Lord in Mike Walsh to ensure his testimony and wisdom was shared worldwide forever in audiobook for generations to come. Mike would always say, read the bible first.