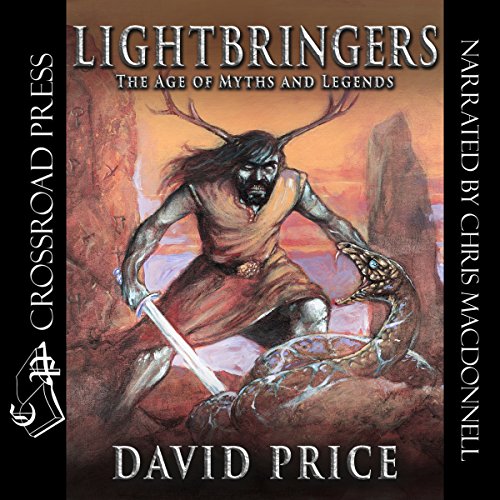 Lightbringers: The Age of Myths and Legends

Written by: David Price
Narrated by: Chris MacDonnell
Try for $0.00

An apocalyptic fairy tale of Lovecraftian proportions, Lightbringers weaves real-world history and mythology with fantastic and terrible imaginations...creating a future that is both beautiful and terrifying.

The ancient conflict that has waged on Earth for eons between two rival groups of alien gods, one from the bright center of the galaxy and one from the dark abyss beyond, is finally nearing its end. A prophecy foretelling the birth of children of the bright gods, the Lightbringers, is fulfilled, and dark forces immediately set out to destroy them.

Raised in secrecy on a mysterious isle by a group of magical women called the Circle of Swans, one of the children, Deykin, is believed to be safe until one fateful day when his world unravels. Fleeing all he has ever known, the young godling begins a quest that will take him and a few loyal companions around the world in search of the clues that will reveal his destiny. Evil ever at their heels, their journey is fraught with peril and, at times, wonder.

Can this young man with awakening god-like powers truly be the one to hold back the darkness that threatens to engulf the Earth? His friends believe so, and they will stand by his side until the very end. Will it be enough? Time is short and the stars are almost right for the Sleeper to awaken from his ages long slumber and exact his vengeance upon the world that has kept him imprisoned for far too long.

What listeners say about Lightbringers: The Age of Myths and Legends

I was really disappointed with the ending.

I very much like the ideas presented in this book. Overall the book starts out pretty well but the ending in my opinion was very lame. I spent 15 hours listening to this book and when we finally reached the climax of the story the powerful evil God turns out to be a big whiner and so is his daughter. I cannot stress how much I hate this ending it literally came out of the blue. What a letdown. I thought the voice actor was good he's the main reason I gave it a 3 overall.