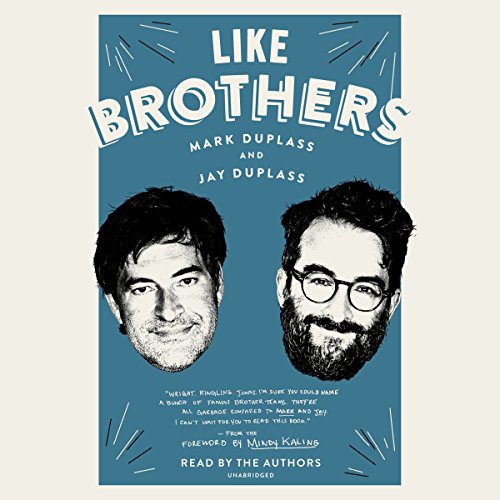 The multitalented writers, directors, producers, and actors (as seen on The League, Transparent, and The Mindy Project) share the secrets of their lifelong partnership in this unique memoir.

"A book that anyone will love... You can enjoy it even if you have no idea who the Duplass brothers are." [Janet Maslin, The New York Times ("17 Refreshing Books to Read This Summer")]

Whether producing, writing, directing, or acting, the Duplass Brothers have made their mark in the world of independent film and television on the strength of their quirky and empathetic approach to storytelling. Now, for the first time, Mark and Jay take listeners on a tour of their lifelong partnership in this unique memoir told in essays that share the secrets of their success, the joys and frustrations of intimate collaboration, and the lessons they've learned the hard way.

From a childhood spent wielding an oversize home video camera in the suburbs of New Orleans to their shared years at the University of Texas in early '90s Austin, and from the breakthrough short they made on a three-dollar budget to the night their feature film Baghead became the center of a Sundance bidding war, Mark and Jay tell the story of a bond that's resilient, affectionate, mutually empowering, and only mildly dysfunctional. They are brutally honest about how their closeness sabotaged their youthful romantic relationships, about the jealousy each felt when the other stole the spotlight as an actor (Mark in The League, Jay in Transparent), and about the challenges they faced on the set of their HBO series Togetherness - namely, too much togetherness.

But Like Brothers is also a surprisingly practical road map to a rewarding creative partnership. Rather than split all their responsibilities 50-50, the brothers learned to capitalize on each other's strengths. They're not afraid to call each other out, because they're also not afraid to compromise. Most relationships aren't - and frankly shouldn't be - as intense as Mark and Jay's, but their brand of trust, validation, and healthy disagreement has taken them far.

Part coming-of-age memoir, part underdog story, and part insider account of succeeding in Hollywood on their own terms, Like Brothers is as openhearted and lovably offbeat as Mark and Jay themselves.

"Wright. Ringling. Jonas. I'm sure you could name a bunch of famous brother teams. They're all garbage compared to Mark and Jay. I can't wait for you to read this book." (From the foreword by Mindy Kaling)

"Mark and Jay Duplass are not just brothers, kind of like their book is not just a memoir.... The book playfully darts between essays, pop-culture tributes and self-help tips.... What sets Like Brothers apart...is the uncanny bond between its authors.... Like Brothers is ultimately a fascinating window into the creative process, showing the complexities that come with being so inextricably linked." (USA Today)

“In my next life I’d like to come back as a Duplass Brother. But until then I’ll just enjoy their hilarious, insightful book.” (Judd Apatow)

"A likable memoir of how Jay and Mark Duplass blazed their idiosyncratic trail, and an inspiring how-to guide." (The New York Times Book Review)

I've smiled, cried and most of all, I loved it, I loved time. Best discovery of the year !!

It was a delight from start to finish. A beautiful insight to the tight bond of brotherhood and the struggles that come along. I would recommend!

I love, love, loved this book! Audio version must be heard. Hearing Jay and Mark's voices, telling their story, in my humble opinion is the only way. A former (possible once again in the future through the inspiration of this book) film and television artist myself, AND also having an older brother about the same years apart (except I'm the younger sister). This book was both incredibly relatable and gouged my heart in a way for which I can not find the words. My brother passed away at 40. But the stories of the Duplass brother's childhood, felt like we had lived in a parallel universe of parallel siblinghood, at that time. The dynamics of my family were quite different, so me at 14 and my brother at 17.5, were geographically separated (ripped apart) as my parents divorced. Had things gone differently, and always in my dreams, our sibling love for each other would have been able to navigate and conquer the distance and life/family dynamics, to have turned out in a similar manner as these 2 brothers. Instead of the darkened path we both struggled up and down for the next 20 years. From a business, dreams, and parntership stand point, (once we found our paths making sense again, and our siblinghood back in balance) things were beginning to bubble. Then my brother got sick. But I have digressed. This is supposed to be a review about Like Brothers. Thank you, thank you, thank you for writing and reading aloud, this book. Not only did it touch me in a way that is surely unique. It was wonderful, heart warming, and hopeful to hear 2 boys and 2 men, brothers, saying I love you to each other, nurturing each other in brotherhood, friendship, and as business partners, whilst struggling, growing, changing and ultimately attaining their dreams. I learned so much from this book. Both about the trials, tribulations, tips & tricks and thoughtful advice of being, surviving and becoming a successful artist. And about relationships. Tearful but also joyful memories of my sibling relationship and so much more that I will work to carry with me into all of my relationships. I will undoubtedly listen to this book over and over and over again. Something I mostly only do with watching movies. My deep heartfelt appreciation to you both, for giving the gift of your book.
-Amy

These guys are AMAZING!

I am inspired every single time I listen to this book--- and yes, I have listened to it several times. These guys are down to earth and innovative!

What I like most about the Duplass Brothers' film and TV work is that they clearly let creativity drive. They often make bold, unexpected choices that individual viewers will either love or hate. They can sometimes err on the side of rumination and navel gazing. While that occasionally results in a tedious stretch that makes you wonder if they forgot which story they were telling, the movie or episode usually benefits from their willingness to let an idea or an emotion simmer, and the experience is better for their resistance to cranking out action and laughs for their own sake. This is especially true when they seem to be nailing such a specific emotion or experience that it's hard to imagine anyone who hasn't lived through it caring enough to sit through a dramatic recreation.

This book feels much the same. Overall, it's fascinating, contemplative, and edifying. There are a few digressions—even a couple of whole chapters—that had me checking the progress bar to decide whether to skip ahead or ride it out for the sake of satisfying my completionist nature. Jizzing in his pants at a concert might have been a formative experience for the author, but I was checked out of that one from the beginning. Then again, if you can relate to having that weirdly specific level of connection to a live performance as an awkward teen, it'll probably be your favorite chapter. I loved the chapter about a kid's fight against her bedtime, but I probably wouldn't have cared much before I had a daughter.

That said, I don't begrudge them the decision to include even my least favorite sections. It's those risky choices that make room for some of the most compelling stories and storytelling. I've yet to read/hear another memoir present an author's story in such a creative way, both in composition and technique. Giving equal weight to snapshot stories and years-long personal and relational growth gives the impression that Mark and Jay could have included any of a hundred other stories, and that the point of the book is not to know everything about their lives, but to appreciate the narratives for what they are. It's a subtle lesson in impactful storytelling. I believe listening to this book will have made me a better writer, if only for showing the effectiveness of taking risks.

I loved this audiobook. It even gave me a great idea for the doc synopsis I’m currently writing. The subjective, loving, sweet tone is wonderful.

Only thing I don’t love about these fellas is their portrayal of female characters. Feels weirdly bro-ey. However I love their take on men - and I appreciate that their wives get to speak for themselves. Also dig the story about a daughter.

Basically…just get this and listen. Then watch This is John on YouTube and watch all their other indie films. Make a study out of it.

all around great audiobook. I'm glad I listened to it read by brothers rather than reading on my own. this audiobook is 100% worth your time, if you've come this far.

So I fall into the stat of listening to the Duplass brothers on Brené Brown’s podcast over a year ago. As a mom trying to raise emotionally healthy and kind boys I thought this was a must listen. I was pleasantly surprised by the fun adventure this book offered. It’s read in a very unique way that just works. Similar to their film work. They write such specific stories that are oddly relatable. It’s a fun feel good book that elicits gratitude, nostalgic memories, and some deep reflection. Highly recommend

I needed this book. Thank you, Mark and Jay for the vulnerability. This book helped rekindle my creativity.

this is one of the best books I've listened to in years!!! it is hilarious, heart warming, introspective & informative. will definitely be re-listening asap.

Not Just for Filmmakers!

This was great and insightful book—
and not just for cinephiles who enjoy the films of the Brothers Duplass!

There are wonderful and emotional life reflections contained within their stories.

So, for me, listening to LIKE BROTHERS was useful as a filmmaker and as a person!

I want to be a Duplass brother. Or at least hug them.

I was so excited to learn that my favorite filmmaking duo were releasing a book! Listening to the audio book was a great idea because I got to hear some of their remembered conversations in their own voices. Their stories of filmmaking experiences were an interesting peek into how the indy sausage gets made. And I found their childhood anecdotes charming and heartwarming. I love how vulnerable and honest they were. How funny they were. How brotherly and wonderful. I hope my kids grow up to love each other as much as these two.