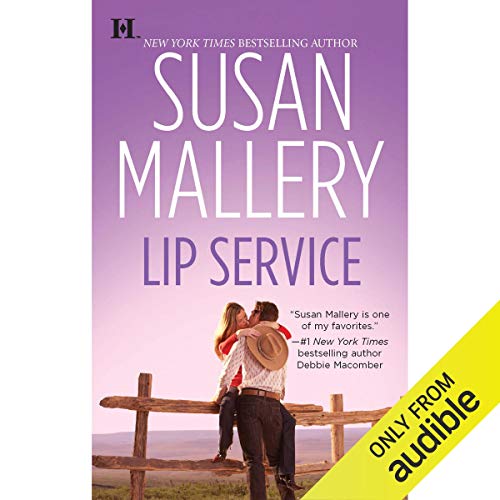 Written by: Susan Mallery
Narrated by: Julie Francis
Try for $0.00

Who wants to marry my daughter?

Skye Titan's wealthy father thinks he can still dictate his daughter's choice in men. Now widowed and a single mother, Skye isn't the yes-girl she once was. Especially since the love of her life is back in Texas after eight long years. He won't like the answers to the questions he's asking. About why she left him at the altar. And about her eight-year-old daughter.

Former Navy SEAL Mitch Cassidy comes home to find nearly everything different. His wounds from battle have changed the way people treat him. His cattle ranch is suddenly organic. But time hasn't touched his desire for Skye - or the sting of her betrayal. Forget lip service. He's asking that luscious mouth of hers to reveal the truth. But will Mitch be able to put the past aside to help Skye get out from under her father's thumb...and help himself recover from a broken heart?

What listeners say about Lip Service

Skye was a huge let down...

I have read all of Susan Mallery's past series and enjoyed them tremendously. This one started well with book 1, but book 2 has been a let down, starting mainly with the female character Skye. Her weakness, self pity and inability to stand up to her dad were way off the charts. Also, the author expected too much out of her readers this time.

1. We have to accept that an 18 year old could be pushed by her father into marrying a stranger even though she's in love with another, but to be allowing herself to be bullied into it again at age 30 because god forbid daddy won't love me anymore, pleeeaaase!!
2. We're expected to like her dead husband, a man who married his friend's teenage daughter, yeech!
3. The 2 sisters dating and fighting over the same guy was absolutely distasteful.
4. Skye's character of peacemaker in book1 became disturbingly unreasonable and silly in book 2.
Two things saved this book: Skye's little girl, really sweet kid that you cannot help but love her and Mich's struglle with his disability and loss. In my opinion, Mich let Skye off the hook way too easily and she was not worthy of him. For Susan Mallery, this book was just tolerable. I really hope she'll get her mojo back in book 3.

What has happened to Susan Mallery?

I was first introduced to Susan Mallery's work with her series dealing with the Buchanan's (Delicious, Sizzling, Tempting & Irresistible). They were funny, well-written stories that had characters you could relate to and root for. However, her work since then has been such a big disappointment! The "Sweet" series (Sweet Spot, Sweet Trouble, Sweet Talk) featured characters that were irritating and dysfunctional, and this Lone Star series has just been plain brutal! The female lead in this book is a whinny, simpering mess, and the male lead is bitter and cruel. I'm a hopeless romantic, and yet I found myself not caring at all what happens to these people because they are ridiculously appalling!

While I listen to these books, I find my mind wandering often because they storyline and characters are just that bad. However, in addition to being a hopeless romantic, I am also eternally optimistic and am hoping each new book will be better, at least containing a hint of the wit, humor and appeal that first drew me to Susan Mallery's work.

Jed is NEVER going to be the father of the year my god what this man has done.
I wish his “son” would just go after him and leave the sisters along.

I loved the back and forth with Sky and Mitch, he was so hurt he was lashing out you can’t blame a guy but you can all at the same time. I loved the little drama’s that happened.
Erin, Sky’s daughter stole the show I loved how open she is. She brings out something in Mitch he buried deep, and I think she helped him heal just a little bit.

It will be interesting this next book, will we find out if they can fix what has been done or will they all have to start over.

I loved the narration, the girls voice to the women to the male voice it was seamless and I enjoyed!

Why didn't I read the reviews before I wasted a credit?! Live and learn.

It might seem odd to give a book an overall rating of 2 when the performance and story get ratings of 1. But that is because this book was so bad I laughed out loud many times while listening, and that entertainment is worth something, right? It was almost so bad it was good. Almost.

As a fan of some of Susan Mallery's other books, I was optimistic that I'd enjoy another slice of escapist melodrama with funny, sympathetic characters. Instead, this insipid book is a parade of insufferable whiners making eye-rolling-ly stupid decisions, while a cliched villain does everything a cartoon bad guy would do short of twirl his long mustache and try to blow up the protagonist's ranch with Acme brand dynamite.

I think the awfulness was magnified by poor narration. It almost sounded like the narrator was chosen for her ability to provide multiple voices, regardless of whether she could actually communicate content. Inflection in the wrong places, stilted delivery, and every female character sounded like they were whining...especially the protagonist.

This book reminds me to suggest a new feature to Audible. It would be great to be able to sort My Library by narrator, so that I can be reminded which narrators I don't care to listen to again.

I am really enjoying this author, whom I just discovered. This narrator is wonderful, easily transitioning from the Spanish maid, to the 8 year old girl, to the old Texan rancher with ease. You forget it is just one person. Great story!

Susan Mallery is an excellent author with a knack for creating enchanting funny, caring characters. This series needs to be read in order; the storyline developes as the series continues deeper with each story.

Narrator does a great job with voice changes for each character. Strong suspenseful storyline.

Struggled to the end

After reading Under Her Skin, I expected this to be just as good...a light summer romance listen. I really got bored with this one. After 5 hours I found myself not really caring about Skye and Mitch and wishing I was at the end. I use audio books on my ipod while on my morning walks and it really make the time go by quickly...not so much with this book. I found myself not listening and my mind wandering because it just doesn't capture your attention. I like Susan Mallery books so I can't give it one star but don't expect the story to be like the first in the series.

The amount of time spent on the “moustache twirling” (over-the-top) villain is a bit much, but I like the characters.

I loved the storyline. It just ended with me having lots of questions though. It felt like only 3/4ths complete. the characters wereb pretty solid.

Entertaining but I prefer the first in the series

I've read all three and have enjoyed listening; I read these when they first came out so I didn't remember all the details. The reader adds a lot to this and I recommend the series if you like a good romance.