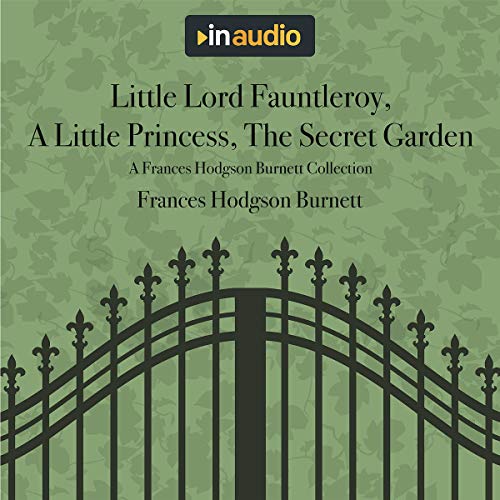 Journey into Frances Hodgson Burnett’s enchanting and charming tales in this collection of her beloved classics: Little Lord Fauntleroy, A Little Princess, and The Secret Garden.

Little Lord Fauntleroy - Cedric Errol is a child living in poverty with his mother in New York City, when all of a sudden, his life is turned upside down. He learns that after the untimely deaths of several distant relatives, he is heir to an enormous estate in England, and has inherited the title of Lord Fauntleroy. His grandfather, the Earl of Dorincourt, asks that Cedric come to England and begin managing his estate, but requires that he leave his mother behind. This is a classic rags-to-riches story and has inspired countless television and film adaptations.

A Little Princess - Young Sara Crewe has lived a happy life with her father in India, but he decides to send her to a boarding school in London to get her away from the harsh environment. He pays for her to have special treatment, which makes the people around her jealous, and they give her the sarcastic title “princess”. When Sara’s father passes away, her special treatment is taken away and she is turned into a slave by the headmistress and other students, who harbored resentment for her wealth. Meanwhile, her father’s friend searches for her to rescue her from her mistreatment. Burnett’s signature tragedy and hopefulness shines in this classic children’s novel.

The Secret Garden - Mary Lennox is a sad and sickly girl. When she moves to a dark, gloomy manor to live with her uncle, she has no interest in exploring her new home - until she learns that there is a secret, locked garden somewhere on the grounds. When Mary finally finds and unlocks the secret garden, she finds that it is like her: sickly, sad, and in need of love. The Secret Garden is the beautiful story of a young girl learning to care for herself by caring for the world around her.

What listeners say about Little Lord Fauntleroy, A Little Princess, The Secret Garden

It's nice to have these three classics in one collection, but the narration for Little Lord Fauntleroy is not good.