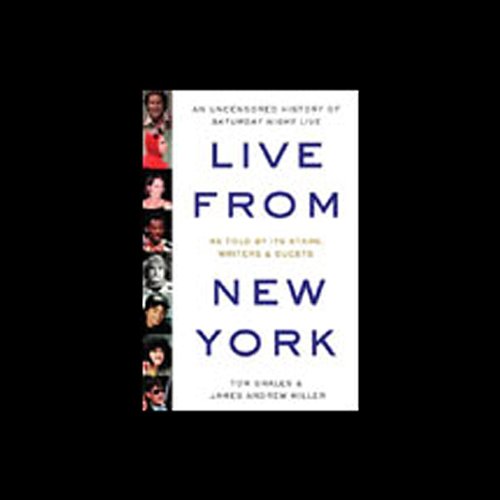 Saturday Night Live changed the face of television: it introduced brash new stars, trashed TV taboos, and had an impact on American life, laughter, and politics.

Live from New York does what no other book about the show has ever done: It lets the people who were there tell the story in their own words, blunt and loving and uncensored.

What listeners say about Live from New York

If you love SNL then this is must read. It's really interesting hearing all the background stories of people and things that went on. I just can't wait for another book like this to be released that will have more current cast members stories added to it! #Audible1

I definitely enjoyed listening to this book, mostly for the insightful, interesting, behind-the-scenes look at SNL. The accounts from the various cast members, especially the early ones, confirmed what I had suspected about the show.

I *really* wish that the narrators had simply read the quotes of the various writers, hosts and cast members. In imitating people whose voices you knew well (such as the various cast members) they came off as caricatured, often oddly similar, voice impressions and overall detracted from listening experience and content of the book. The narrators take artistic license by interpreting and adding dramatic emphasis, emotion, etc. to the quotes of various people that I question would have been there had the actual people spoke.

Overall, I good listening experience to learn more about the makings of an American pop culture institution.

For me, the problem is with the format. I am very famiar with the voices of the people being portrayed and as a result I was distracted by the narrators. For example, it was very distracting to have someone other than Eddie Murphy read words as Eddie Murphy. Even worse, you'd have the same voice for many different people. This particular book would be best read.

Honestly, Not Great - Only For The BIGGEST Fans

Would you try another book from Tom Shales and James Andrew Miller and/or Christopher Burns and Eric Conger ?

Would you ever listen to anything by Tom Shales and James Andrew Miller again?

Who would you have cast as narrator instead of Christopher Burns and Eric Conger ?

I think if you're going to try to have lots of different voices for so many different people like that, you've got to have so many more narrators than they did for this audiobook. It was embarrassing to hear the same african-american guy doing all the african-american guy voices, and it was lame to hear the same "young sounding guy" do a couple of the voices back-to-back without even trying to sound different.Some of the voices have accents that the real-life people they're representing don't even have! Honestly, this was not good.If I hadn't been a lifelong, gigantic fan of SNL, I never would've even finished listening to this.

It actually reads like an interview-heavy documentary. I'd have MUCH rather seen the real people talking than hear these awful voice overs from other actors.

The fact that SNL and its history is enthralling all by itself is the only thing that makes this book even sort of worth listening to. There are some really interesting and worthwhile moments in this book, but the audiobook performance is abysmal.

Would you try another book from Tom Shales and James Andrew Miller and/or Christopher Burns and Eric Conger ?

I would probably stay away from these authors. The narration was ok.

Would you ever listen to anything by Tom Shales and James Andrew Miller again?

The narration was weird. There were like 6 different narrators, alternating the quotes by the actors and writers. It was weird to have someone else do the voice of an actor you know, but fine. At times, I felt the narration was over-acted, but I got used to it.

If you could play editor, what scene or scenes would you have cut from Live from New York?

The book is basically just a series of quotes that tell the story. That's fine, but I think it could have moved faster if they summarized more and used fewer quotes. The early years were especially boring to me, but maybe that's because I don't remember them.

I'm a big fan of SNL and I'm glad I know more about the history of the show now. It was just a little tedious at times.

Very good listen, but left me wishing it had more.

Probably more like 3.5 stars instead of 4 but still really good and if you're a fan big of SNL it really hits.
The book details the ins and outs and minor details of SNL from it's inception till present day. But I kept wanting more of a focused story from the years I grew up on, which will most likely be the same for anyone listening. The first cast gets the most page time, but even that could be it's own incredible book.

The book spends a lot of time on the early years which is great, but that attention to detail for the later years is glossed over through the rest of the book which is too bad. I wish the same amount of detail that went into the first cast and SNL's opening years showed up in the later years as well. That of course would have made the book four times the size it is now though.

The dynamics of how the cast works, writers write, and how the show comes together is fascinating, but I still wanted more about the show I love so much and the book never seems dive as deep as you want into any given set of cast members, besides the first for obvious reasons.

The reading of the book is very well done. There are numerous people doing all of the different quotes throughout the book from cast members and writers, to studio execs. It sounds like they try to match the person they're imitating every once in a while which is kind of weak, but nothing that throws you out of the book. Very easy to listen to and sounded great.

This is a must read/listen for any SNL fan.

I agree with the other reviewers that the people who read quotes from cast members' and writers' interviews probably misinterpreted the quotes by placing the emphasis in the wrong places. This detracted slightly from the book's presentation, as did the slightly off attempts to impersonate the voices which we all know so well. Still, the content of the book was fascinating, and this book was extremely well written and researched. I was not looking for sensationalism, or "an expose." This book offers the facts, interpretations and experiences of the cast members over the years and presents them in a frank, factual and entertaining style. The writing and the narration, even with the possible problems with the quotes, made this one of the most interesting audiobooks I have heard in a long time. But I am a fan and was interested in knowning about all the backstage drama at SNL.

This book explains how and why the show got so bad at points, and how and why it got better. It explains the concept for the show and the network's meddling and occasionally necessary interference. It discusses the interrelationship of the cast members, writers and producers throughout the years. I found it fascinating. If you liked the show, you'll like the book.

Great book for anyone who loves or ever loved Saturday Night Live. Found it very interesting to find how it was created and why at times the show seemed to falter! Great listining. :)

Live From New York was amazing

Would you consider the audio edition of Live from New York to be better than the print version?

I really enjoyed the audio edition since there were multiple people that helped write the book there were also multiple voices that help read the book as well. Having all these voices help me picture the people being interviewed. It also gave me a visual throwback to the skits and times that the people hosted or were a part of the SNL cast.

Listening to the audio book has also inspired me to pick up the print version as well.

What other book might you compare Live from New York to and why?

This book not only gave a history to the show but also to the City and what everyone was going through during different times.

To me this book is SNL's biography.

What does Christopher Burns and Eric Conger bring to the story that you wouldn’t experience if you just read the book?

You are able to feel all the emotion that everyone was going through when they talk about significant moments in their history and in the show's.

It was very moving when old cast members/hosts/producers would talk about a cast member that passed away. During these parts the book get's views from a lot of people and you are given a great insight to what they were going through at that difficult time.

I really enjoyed this book and will for sure pick up a print copy as well.

I wish there was more of this book - I could have listened all day to former SNL castmates and writers sharing their experiences. At the very least, you'll walk away from this highly-entertaining read with a new respect and admiration for Saturday Night Live. For the audio version, some contributors to the book are combined so hearing the same voice read for multiple characters could be a bit distracting at first. However, well worth getting past! Great behind-the-scenes look and highly-entertaining listen.

Ok read but not great..

This book starts out very interesting but gets a little long winded and when it finally winds up I was glad it did. The early days of SNL was the most interesting. The first cast were the ones I grew up with and there was actually very little revealed in this book that hasn't been common knowledge for many years. I was surprised at a few things and especially all the negative comments about Chevy Chase even from some of the more recent cast members.