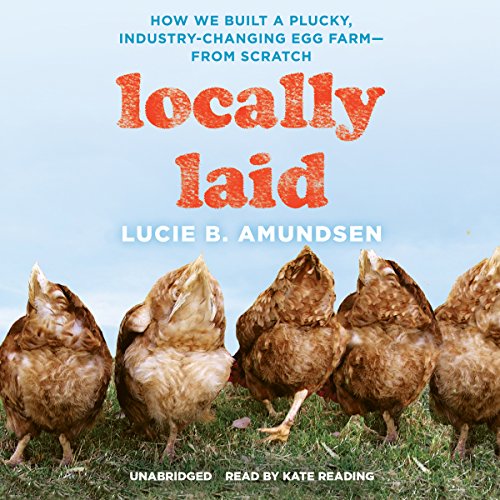 Written by: Lucie B. Amundsen
Narrated by: Kate Reading
Try for $0.00

How a Midwestern family with no agriculture experience went from a few backyard chickens to a full-fledged farm - and discovered why local chicks are better.

When Lucie Amundsen had a rare night out with her husband, she never imagined what he'd tell her over dinner - that his dream was to quit his office job (with benefits!) and start a commercial-scale pasture-raised egg farm. His entire agricultural experience consisted of raising five backyard hens, none of whom had yet laid a single egg.

To create this pastured poultry ranch, the couple scrambles to acquire nearly 2,000 chickens - all named Lola. These hens, purchased commercially, arrive bereft of basic chicken-like instincts, such as the evening urge to roost. The newbie farmers also deal with their own shortcomings, making for a failed inspection and intense struggles to keep livestock alive (much less laying) during a brutal winter. But with a heavy dose of humor, they learn to negotiate the highly stressed no-man's-land known as middle agriculture. Amundsen sees firsthand how these midsized farms, situated between small-scale operations and mammoth factory farms, are vital to rebuilding America's local food system.

With an unexpected passion for this dubious enterprise, Amundsen shares a messy, wry, and entirely educational story of the unforeseen payoffs (and frequent pitfalls) of one couple's ag adventure - and many, many hours spent wrangling chickens.

"Narrator Kate Reading is excellent at capturing Amundsen's emotions as she deals with financial hardships, physical fatigue, and endless farm-related issues while discovering the joy in trying to create positive change. During the more technical passages, Reading slows the pace and reads with crisp enunciation, making the material easy to understand." ( AudioFile)

What listeners say about Locally Laid

Wow, I felt like I just received an education on farming and chickens that I had not anticipated. I have chickens myself, but did not know so much of what was explained from the biology to the farming to the sales. It was wonderful. And I wasn’t expecting it either since I thought this would have been a story about hating farming and then loving it, but it was so much more. I highly recommend it

The memoir was compelling and the wordsmithing was refreshing, however, I was put off by the vulgarity and frequent innuendo. This is not a family friendly book. There are many other books out there telling a similar story with more uplifting content. This is a story of hardship and mediocre success with many pitfalls and few real gratifying achievements. Not on my top 1000 list.

I was hoping to pick up pointers on poultry but found bits of the answers to two of my BIG questions. The author mused on EVERYTHING.

One was that most sustainable farmers are tiny and support themselves with off-farm earnings. So, it's not just me. It's most of us. That is, maybe what I'm doing with my market garden is OK. That my hanging in there is OK. That I am not wasting my time, but instead doing the Right Thing.

Another gem. She summarized an interview with an economist/farmer/professor who said many or most economists don't believe in resource depletion. Specificially that neoliberalist economists believe that resources cannot be destroyed, only converted. This implies that the neoliberal economists don't believe in soil depletion, a big contributor to global warming. That in their Ivory Towers, they take soil for granted and thus abuse it.

As a husband always seeking to do more and better, with a wife often exacerbated by me, I can relate to the story. More than two that though, it is a great telling of the challenges of entrepreneurship, farming, family, and way to share with the world more information about sustainable agriculture and farming. Keep it up!

I've been researching eating more locally and this book was very informative. It had humor and facts, was well organized and easy to listen to.

Both entertaining and a great read. A real life experience of the family starting a pasture raised egg business.

Looking for an inspirational and informative book on the local food movement and the struggle of producers? Look no further. Great writing, great narration. You won't be disappointed. I laughed out loud many times and have a greater appreciation for what it takes to do the right thing when it comes to buying local.

Took me on a roller coaster ride of emotions

Would you listen to Locally Laid again? Why?

Yes, because it was so entertaining. And also some good information about agribusiness is included. Anyone who eats or pays taxes should be interested in agribusiness

What was one of the most memorable moments of Locally Laid?

There were so many.
Mostly Lucie's tales of the family's tribulations.

Lucie crying at a restaurant when Jason tells her of his dream.

-The Amundsen’s mixing with cultures other than their own, like their visit to Amish farmers; and the visit from glitzy California PR to the egg farm in Minnesota.

The city of Duluth rallying around the Amundsens.

After receiving business advice from a group of mentors, Lucie "losing her cookies" in the parking ramp on her way to her car as she ponders that it is better to give than receive.

Kates' reading voice was pleasant, easy to understand and believable

I would have if I had the time it is too long for that.

It's a fun memoir packed with information about food and business.

I couldn't take it any longer. I made it about a third of the way through and was so distracted by the unnatural sound of the narrator I couldn't hear the story. Unfortunately, the story didn't seem interesting enough to suffer the narration. I had to return this one to Audible.

If I had to come up with something to complain about I would have to say I wish it would have continued. I have my fingers crossed for another book soon. This one ended in 2016ish. Hopefully another is in the works. Best wishes for this farm and family!

This is a very approachable peek into the struggles of farm startup. Chicken and middle sized agriculture problems. What is the best way to farm and why? My book club ladies wheels were turning about many parts of this book. I can easily say we have changes some shopping behaviors as well. Thank you Lucie Amundsen for being so kind and approachable! You are moving mountains.