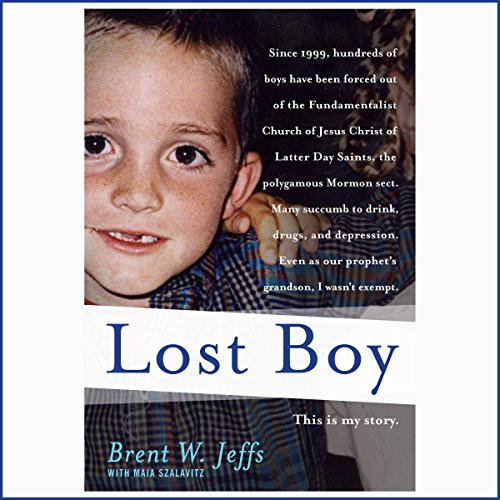 In the polygamous Fundamentalist Church of Jesus Christ of Latter-day Saints (FLDS), girls can become valuable property as plural wives, but boys are expendable, even a liability. In this powerful and heartbreaking account, former FLDS member Brent Jeffs reveals both the terror and the love he experienced growing up on his prophet's compound and the harsh exile existence that so many boys face once they have been expelled by the sect.

Brent Jeffs is the nephew of Warren Jeffs, the imprisoned leader of the FLDS. The son of a prominent family in the church, Brent could have grown up to have multiple wives of his own and significant power in the 10,000-strong community. But he knew that behind the group's pious public image - women in chaste dresses carrying babies on their hips - lay a much darker reality. So he walked away, and was the first to file a sexual-abuse lawsuit against his uncle. Now Brent shares his courageous story and that of many other young men who have become "lost boys" when they leave the FLDS, either by choice or by expulsion.

Brent experienced firsthand the absolute power that church leaders wield, the kind of power that corrupts and perverts those who will do anything to maintain it. Once young men no longer belong to the church, they are cast out into a world for which they are utterly unprepared. More often than not, they succumb to the temptations of alcohol and other drugs.

Tragically, Brent lost two of his brothers in this struggle, one to suicide, the other to overdose. In this book he shows that lost boys can triumph and that abuse and trauma can be overcome, and he hopes that readers will be inspired to help former FLDS members find their way in the world.

What listeners say about Lost Boy

I'm not sure why, but I'm fascinated by polygamy.. Not interested in polygamy myself, mind you.. just fascinated by it... I've listened to "Escaped" by Carolyn Jessop, "Stolen Innocence" by Ellisa Walls and "Shattered Dreams" by Irene Spencer, all books about woman who suffered abuse due to the FLDS and eventually escaped.. I've found all of those book to be fascinating and mind boggling all at the same time.. I was glad to find a book written by one of the young men affected by the FLDS to hear a males point of view.. I didn't expect what I heard... I didn't realize that Warren Jeffs was raping little boys while his brothers watched...SICKO'S... The more I hear about this man the more I'm shocked at what he got away with.. Every book I read I find myself asking how in the world do people like Warren Jeffs convince people to follow his craziness? Hiltler reincarnated??

Lost Boy is well written and narrated.. It held my interest and I couldn't wait to get back to it each time I had to turn it off...

The accounts he gave of what led up to Jeffs arrest matched the information given in the books written by the woman I mentioned above...

I remember when they had the raid on their community and took all the children away.. The media tried to make it look like it was done unfairly.. After reading these stories, I'm wondering why they ever let the children go back!!

Fascinating account of this young mans life in the FLDS and his long journey to find a life he loves.....

Stark. It may not be entertaining, per se, but there's a compelling power in the starkness of a previously hidden truth. This story of Brent W. Jeffs' is just that: Compelling. Talk about speaking truth to power! And the power Brent Jeffs challenges is that which British historian Lord Acton famously described as, "Power tends to corrupt, and absolute power corrupts absolutely." This book reveals the absolute power of one man (Brent's uncle Warren) over the very personal lives of thousands and how that power corrupts not only his chosen "henchmen" who live privileged lives, but also corrupts the lives of his rank- and-file loyal followers, whose children are the most pathetic of their helpless victims.

When "law enforcement" in the town are members of the same religion/cult as "the prophet" (ruler) of the compound in that town and his mind controlled followers, then escape becomes nearly impossible ... that is, unless you're a boy who would otherwise grow up to challenge the older men the older men for privileges ... men who are required by their religion (FLDS) to have a minimum of three wives in order to attain salvation via populating their own personal universes. It's as you may have seen on National Geographic ... the whole lion pride type of social structure, where the juvenile males are forced to abandon the pride and live on its outskirts, rather than face the consequences of challenging the "king" for survival via either food or reproduction ..... Thank Goodness that Brent had the strength of character to write (in restrained and nonlurid style) about his personal experiences, including seeking legal redress for the crimes that absolute power inevitably fostered.

Eye opening narrative on living in the FLDS

A brave retelling of the firsthand accounts experienced by a former member of the Fundamentalist Church of Latter Day Saints. Like many cult followings, the FDLS is filled with stories of abuse, molestation, rape, and in some cases, torture and death. This audio experience will captivate your attention from the first 5 minutes and hold your interest through to the final chapter! Although the theme appears dark throughout, the truth eventually hits its mark and provides some degree of relief. This is a true story worthy of being heard.

A male perspective on the FLDS

What was one of the most memorable moments of Lost Boy?

When Brent was talking about his panic attacks and the horrible memories coming to the surface, I could almost feel his fear and dread - I cannot imagine!

I have read a few of the books from the former female members of the FLDS and how life was on a daily basis, so it was very interesting to hear a boy's view on it. I was impressed by how highly he thought of his father, and how he said he was taught to treat women with respect. This didn't seem to be the norm in other families, where women were treated as currency, or property. So, I think his father was probably not in agreement with how badly women were treated in other families and that is refreshing to say the least. I enjoyed hearing his story and the journey of healing he had to endure in adulthood.

Truth about a HORRID "religion" of deceipt & abuse

What made the experience of listening to Lost Boy the most enjoyable?

After listening to "The Witness Wore Red", this was a great listen from a male point of view. I have yet to listen to a few other women's books regarding the sect, but this was written very well by Warren Jeffs' nephew who experience unbelievable abuse. I have become completely involved in so many of these stories as it just boggles my mind who the followers can believe in this lifestyle. God bless those escapees & survivors!

Which character – as performed by Mike Chamberlain – was your favorite?

No real favorite, but he was very easy to listen to. To listen to his voice, his compassion about the story makes me feel like he could have been one of them!

I was close to tears a couple of time considering the awful abuse to BOYS as well as the girls. And I feel bad for the Lost Boys and what they turn to (drugs & alcohol) once they leave or are cast out. They are not prepared for the real world as a result of their upbringing.

I give this an overall five star because I believe the writer really put himself out there to bring home the truth to those of us who would struggle to believe that this even happened in this day and age. The performance was clear, and the story is true, and must continue to be told in order to help the rest of the Lost Boys.

I was very impressed by the detailed writing and explanations in this audio book. Also, the narrator did an awesome job too and was very clear and easy to understand. I have listened to several similar books on this church and I thought this was the best. Best of luck to all involved who suffered.

After listening to the Witness Wore Red, I found this book to be an interesting take from a man's point of view regarding the same incident in the LDS church.

Sad story of a little boy becoming a man

What would have made Lost Boy better?

I found the book quite good through the first half. But then I became bored and had to stop before I started screaming at the "Lost Boy." Too much redundancy.

The narrator's voice sounds as if he is or could be the Lost Boy.