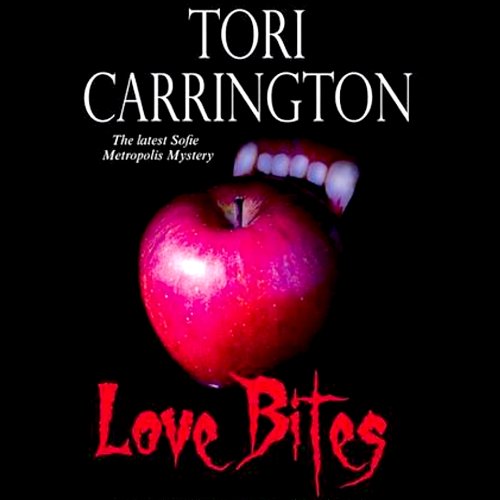 Written by: Tori Carrington
Narrated by: Vanessa Johansson
Try for $0.00

A Sofie Metropolis Paranormal Mystery - Sofie Metropolis is back and in the deep end of the coffee pot when she's retained by the neighborhood vampire to prove he isn’t responsible for a recent string of grisly murders, and her mother talks her into looking for a missing woman neither of them knows, but Thalia has adopted in absentia nonetheless. And if her plate isn’t full enough, things heat up on the romantic front when ‘bounty hunter’ Jake Porter and yummy Greek baker Dino both decide to vie for her undivided attention. What’s a good Greek girl with a gun to do?

What listeners say about Love Bites

I read, and enjoyed, all of the first 4 Sofie Metropolis stories. So much so that, when Love Bites did not come out in audio format I waited...and waited. When it finally came out on Audible I happily surrendered one of my credits to listen. Unfortunately, I was disappointed with how bland and boring it was. The series has a faint hint of a Greek Stephanie Plum but without the laugh-out-loud moments that make the Plum series so enjoyable. I am a fan of supernatural fiction, so the vampire angle is intriguing, but the series really needs some sort of boost. Even the ending was boring, to the point where I was sort of glad it was over. I may or may not read Queen's Ransom, but I doubt I will sacrifice another credit for it. Maybe on Kindle...

In spite of all that, Vanessa Johansson did a very nice job narrating this story.

mystery with a little romance.... characters are very likable. I have read all the books in the series.

Good story love the suspense and wimsey. Having a different Narrator for me changed Sofia's personality.

what happened to awesome?

The other books in the series were wonderful. This one lacked the pizzazz of the others.

loved the story... hate this narrator

I love the Sophie Metropolis series. I've thoroughly enjoyed all of the books. I just wish they had kept the original narrator. her dialects and phrasing seemed more authentic

What disappointed you about Love Bites?

The story, the narrater, and the character development

What was most disappointing about Tori Carrington’s story?

Shallow and it drug, No humor Not like her earlier work

Who would you have cast as narrator instead of Vanessa Johansson?

Anna Fields She did a good job with other books in the series.

If you could play editor, what scene or scenes would you have cut from Love Bites?

Most of them with the secretary

The author made the secretary much more dramatic and irritating than she should have. She was funnier in the other books. If she worked for me I would have fired her.

The author also made Sophie appear stupid. The Vampire thing was dumb.

I was very disappointed, bored and, irritated. I put my I-phone on fast just to get through the book. I was hoping it would get better but it never did.

It's bad enough when they keep switching readers in a series, but the readers for Sofie Metropolis books keep getting worse. I can barely listen to Vanessa Johansson. Thank God I can speed it up to get through the story faster!