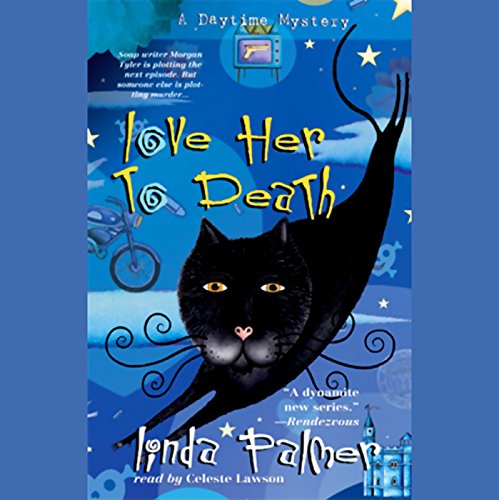 Love Her to Death

Following the success of Linda Palmer's first book in the series, Love Is Murder, listeners are treated to the return of Morgan Tyler, feisty head writer for the TV soap opera Love of My Life. Her imagination is always at work, churning out the scenes that fill many a fan's daytime with drama. But when fiction becomes stranger, and more deadly, than art, Morgan is forced to rely on her ingenuity to save herself from "early cancellation".

Now Morgan Tyler has a new title, co-executive producer, and a new responsibility: take care of everything. When an actress on the show is murdered, Morgan had better find out who is behind the bloodshed before someone else is written out of the picture.

What listeners say about Love Her to Death

This is a good series. I look forward to reading the next. The music at the end is a nice touch.

Head Soap Writer to the Rescue!

Linda Palmer has found a niche in the mystery format that a great many readers will enjoy--combining Soap Opera with Murder Mysteries! It's obvious that Ms. Palmer has done her research very well in relation to how daytime drama is written, produced and directed. Her research brings a great deal of realism to the story as she introduces the Daytime Drama she writes for, the "Stars" of the show, and even keeps the reader up-to-date on what is happening on that drama all the while murder and mayhem is revolving around her life! Not to mention the two hunks that are in love/lust for her (a detective and a true crime author)--and then a third man walks in (who may be our murderer) and he is the first man she sleeps with since her husband passed away five years ago! Personally, I was rooting for Chet (the true crime author!

All in all, this is a great read and I'm looking forward to book #3.

I fast forwarded through most of this book. It was relatively easy to predict the vilian. Perhaps I've just listened to too many books and am expecting too much. I found the narrator to be distracting as she did not seem to be the right voice for this character.