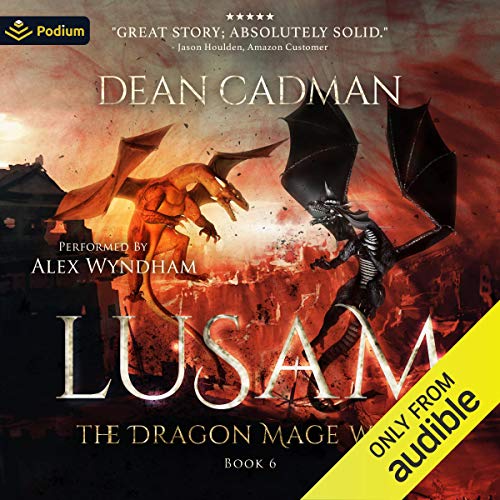 Written by: Dean Cadman
Narrated by: Alex Wyndham
Try for $0.00

The final book in the Lusam series!

Aamon continues to grow in strength while Lusam and his party attempt to forge new alliances with the dragons of Podrana. New Netherworld horrors are created and unleashed by Aamon while he makes his final preparations for escape.

Humanity’s only hope of finally sealing The Rift and preventing the world’s destruction now lies in Lusam’s ability to find a dragon willing to bond with him, so that he, too, can become a fully-fledged Guardian.

But they soon discover that the dragon’s homeland of Eindryl has changed a great deal since Arlo and Ryuu were last there. New, unforeseen hurdles stand in their way. But as one path seems lost to them, another might yet lead them to victory. Only time will tell.

But time is no longer on their side.

What listeners say about Lusam

The series is an enjoyable five books tied together poorly in a sixth book where the only significant plot twist is that there wasn’t a resolution to many of the central storylines. Yes, the battle with Aamon concludes as does the inevitable fight with Lord Zelrod, but so many other plots go untouched.

Among the missing storylines is any resolution to the story of Zed and Cole. They go about building an army and conquering lands, but never interact with either Lord Zelrod or Lusam, so what was the point of continuing their story throughout the books? They play no role in the outcome of events.

More stories are learned from encounters with the dragons, including deceit and treachery that promises to be avenged. Yet it never was.

Overall, the series was good but book 6 felt forced. I’m disappointed in the conclusion and feel I missed out on some great stories I’ll never hear.

This has been one of my favorite series until the end of book 6.

The entire book appeared to be leading up to an epic climax of triumph but dropped off into a lack luster, passionless dead end. The story stops abruptly without even trying to tying up loose ends or finishing the stories of Cole, Zed it the evil leader of the dragons.

It’s almost as if the author planned on a 7th book but got bored and gave up.

Alex Wyndham does a great job as narrator. Dean Cadman is one of the all time greats as far as a story weaver. Awesome experience as a whole.

This book series is exactly what I look for in these type of books. They just don’t skim the top it goes more in depth on the challenges that Lusam dealt with both physically and emotionally.

Nothing was filtered and feelings were all brought to light on all characters, the book was wonderful and I am really looking forward to what comes next for Lusam and Neela.

Where's the ending?? I blame the publishers

I'll start with the good. Overall, this last installment was pretty good and I enjoyed it..... until the end. I have loved this entire series and preordered this installment only to be sorely disappointed by the ending. If that's even what you can call it. I'm confused as to why we had to follow Zed and Cole for 5 whole books, only to not have an actual clue as to what becomes of their plans. To make matters worse, their cliff hanger ending, was the actual ending of the book. If it had been closer to the middle, then maybe I could have tried to pretend I forgot about it. I am holding firm to my idea that, the publishers gave the writer a deadline and creatively he wasn't done, yet they published it anyway. I refuse to believe that this was the planned ending.

Good story line, but unnecessarily comes to a screeching halt and leaves some unresolved questions.

Good but not great ending

The ending felt very anti climatic. The dragon story was just abandoned. What about Lusams promise?? Zed and Coles story was pointless and had no impact on the story. You could skip those chapters and it wouldn't effect the story at all. Overall it was a good story but predictable ending

I have totally enjoyed this series

I hope there is more to come with a part two. I have totally enjoyed this series.

great series loved all the books but didn't like the 6th ending. lots of unanswered questions and open plot lines