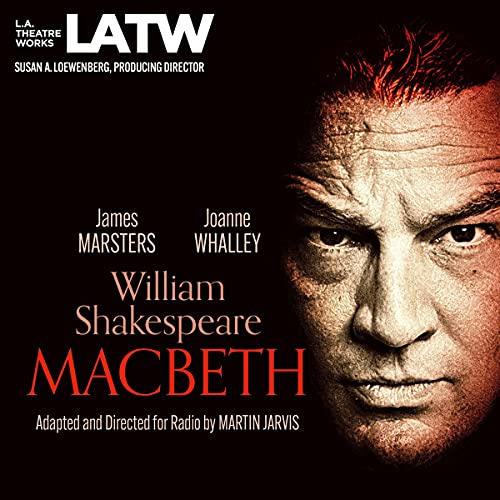 Infamously known as the cursed Scottish play, Macbeth is perhaps Shakespeare’s darkest tragedy. When General Macbeth is foretold by three witches that he will one day be King of Scotland, Lady Macbeth convinces him to get rid of anyone who could stand in his way - including committing regicide. As Macbeth ascends to the throne through bloody murder, he becomes a tyrant consumed by fear and paranoia.

An L.A. Theatre Works full-cast performance featuring: James Marsters as Macbeth; Joanne Whalley as Lady Macbeth; Josh Cooke as Banquo and others; J.D. Cullum as Macduff and Second Murderer; Dan Donohue as Ross; Jeannie Elias as Second Witch and others; Chuma Gault as Lennox and Servant; Jon Matthews as Malcolm; Alan Shearman as Angus and others; André Sogliuzzo as Donalbain, Third Witch and others; Kate Steele as Lady Macduff, First Witch and Apparition; Kris Tabori as Duncan and others.

Directed by Martin Jarvis. Sound effects by Tony Palermo. Recorded at the Invisible Studios, West Hollywood, in May 2011.

What listeners say about Macbeth

Great version of a true classic

Highly recommend this version of The Scottish Play. A few minor liberties taken compared to the folio version of the text (e.g. "you" substituted for "thou" every once in a while, and references to Seyton clarified here and there), but they all seem to add to the clarity of the narrative without distracting. Voice actors do a great job and sound effects are on point. Finally, it's way better than the free Librivox version. Well worth it!

Ok, unless you have the play memorized, this is hard to follow without the characters before you on the stage, but it is still just EXCELLENT. Don't let that difficulty stop you, just listen to this with the play or a guide in front of you, so you always remember who is speaking and where they are.

I greatly enjoyed listening to this full-cast performance. There was great chemistry between the lead cast Mr. Marsters and Mrs. Whalley which sparked the story.
The sound effects were appropriate and didn't distract. A few of the male voices sounded similar, so sometimes it took a while to distinguish the different characters (if you are not very familiar with the lines)
All in all a production in the typical LATW quality and a bargain if you look at the price.

All hail this Macbeth!

I felt sad when each character died including Macbeth and Lady M which is a testament to the actors. Macbeth was courageous to the end; a true warrior who got greedy and caused so much chaos that he had to be stopped. This production tells this story believably. It is acted well, the sound is clear and special effects add to the experience. Upon further listenings, the lesser lines of the play rise up to the surface. This is a recording that deserves to be played more than once.

“Confusion now hath made his masterpiece

I haven't read this since I was in HS. Loved it. Probably my biggest complaint is how slim it is. But, Shakespeare is at the top of his game. Based on an account of the reigns of Duncan and Makbeth in &quot;the Chronicals of Scotland&quot; in Raphael Holinshed's Chronicles of England, Scotland, and Ireland, it also spins into myth and alludes a bit to Seneca's tragedies. This is an efficient play. It is a sword, a knife, a razor blade; interesting and tight. And Lady Macbeth is just, well, bloody amazing. It is hard sometimes to map EXACTLY where the magic of Shakespeare happens, but with Macbeth it is fairly easy. Shakespeare is the master at weaving very human characteristics (pride, ambition, duplicity, guilt) with a dark, mythic background filled with ghosts and witches. But add to that Shakespeare's poetry (95% of this play is in verse) and grand-scale characters, and he transports this play from great to fantastic. Some of Shakespeare's most memorable lines and moments come from Macbeth. I still think there are several plays that are better (Hamlet, Romeo and Juliet, King Lear, etc), but there is SOMETHING in this play that hooks me hard. Not necessarily always in a good way. But it grabs me like guilt still.

Some of the best lines:

― “Where shall we three meet again in thunder, lightning, or in rain? When the hurlyburly 's done, when the battle 's lost and won” (Act 1, Scene 1).

― “I have no spur
To prick the sides of my intent, but only
Vaulting ambition, which o'erleaps itself
And falls on the other.” (Act 1, Scene 7)

Horrible performance of a wonderful play

I bought this after listening to Gielgud's Hamlet, as it was among the highest ranked Shakespeare dramatizations. But ... wow ... it's a truly awful performance by all save Lady MacBeth, who stands out and tries valiantly to carry the cast around her.

I honestly thought back to high school, when our poor English teachers had to listen to 25 pasty kids reading beautiful soliloquies in an uninterested monotone. In places, the voices are so similar and droning that it's difficult to tell the characters apart.

Give this one a miss.

Varying performance qualities makes this version feel disjointed. sine are quite believable, but others (including the lead) sound very much like they're reading from a script.

A very nice performance of my favorite Shakespeare. A couple of interesting interpretations in tone that I disagree with, but heck, that's the fun of reading Shakespeare. The performers did a great job and went at it full bore. Enjoyed the witches, Macbeth, and Macduff most of all. He had a small part in this one, but Mr Tabori has to be the greatest reader of all times. Check out his La Horla reading if you can get your hands on it. On to the hurlyburly!

Just a great audiobook for the audio library. Most actors were excellent. Entertaining listen for the road or sitting at home.

Would you try another book from William Shakespeare and/or the narrators?

Other than Lady Macbeth (Joanne Whalley), the actors flailed and did not do justice to this dark furtive play. It's a shame. Very disappointing.

I enjoyed this version, although initially I thought there were some issues. One other commenter mention that it seemed people were just reading the text. I agree with that assessment, but I'll add, some of the minor characters read so quickly it was hard to understand the text. I don't think they actually understood it.

The major roles were nicely done.

Looking for a good version of Macbeth my attention was brought to this one because of James Marsters and i have to say thats he is still here, and everyone is fantastic. I have to replay it quickly.