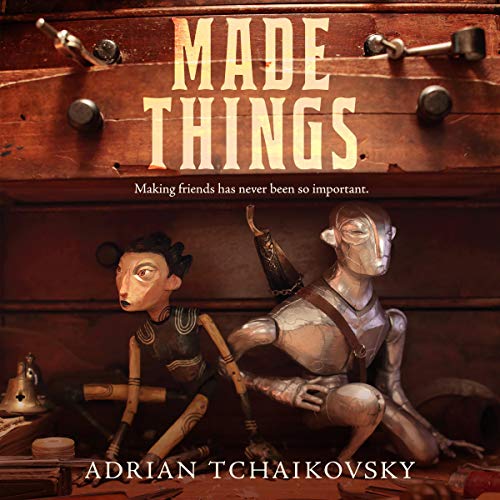 Award-winning author Adrian Tchaikovsky's Made Things is dark fantasy tale of how the most unlikely characters may become the most heroic.

Making friends has never been so important.

Welcome to Fountains Parish - a cesspit of trade and crime, where ambition curls up to die and desperation grows on its cobbled streets like mold on week-old bread.

Coppelia is a street thief, a trickster, a low-level con artist. But she has something other thieves don't...tiny puppet-like companions: some made of wood, some of metal. They don't entirely trust her, and she doesn't entirely understand them, but their partnership mostly works.

After a surprising discovery shakes their world to the core, Coppelia and her friends must re-examine everything they thought they knew about their world, while attempting to save their city from a seemingly impossible new threat.

"Fleeting and rich, Made Things is the work of a highly skilled artist, almost certain to engender its reader with an enduring fondness." (Aurealis Magazine)

"Thieves, mages, and miniature golems run afoul of each other in this charming novella set in a steampunk fantasy world.... The dashingly roguish cast, clever prose, and well-placed moments of heartfelt emotion are sure to delight." (Publishers Weekly)

"Tchaikovsky at the top of his form." (Booklist)

What listeners say about Made Things

I'm a Tchaikovsky fan and have been for awhile now, but, while I like many many things about his wonderful speculative fiction I haven't fallen in love with one of his characters...till now.
The world building, is, as usual, awesome. The story is solid and satisfying. I've read speculative fic since Heinlein and Howard and have watched male authors stumble about while trying to figure out females, with mixed results. This has never seemed to be a problem for Tchaikovsky, so that's always good. But this is the first time I've simply fallen into a Tchaikovsky character, and that's made Made Things into a new favorite that I'll revisit many times.

I enjoyed the story but much more the gorgeous phrasing, descriptions and construction of the writing. A gem.

That the author/narrator is such a talented storyteller. While short, this is wonderfully rich and engaging tale, and its beautifully narrated.