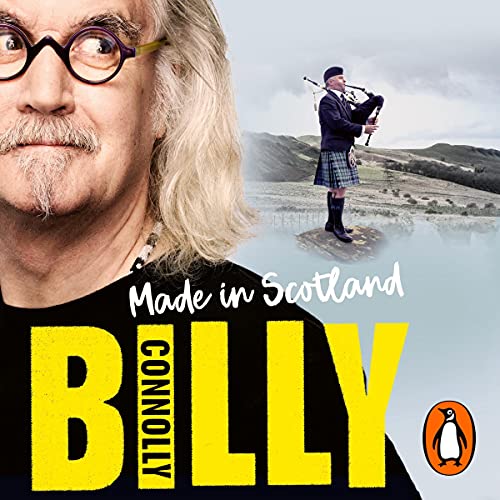 Written by: Billy Connolly
Narrated by: Gordon Kennedy
Try for $0.00

All roads lead back home.

Billy Connolly may be a citizen of the world, but in his heart he's never been far from his homeland. Made in Scotland is Billy's unique and intimate portrait of his native Scotland, a love letter to the places and people that made him.

It's an adventure inspired by a single incident: the moment Billy received his Knighthood and was asked, 'How does it feel to have achieved all this when you came from nothing?' His response was, 'But I did come from something!' So begins an odyssey through the Highlands, the Lowlands and the Barrowlands on a shaggy dog quest to find out what that 'something' was and whether it is still there.

Far from a typical travelogue, Billy’s quest is as much through his memories and experiences as it is through his excursions, with a series of key artefacts prompting reminiscences - a first pressing of a Hank Williams album (the first record he ever owned), Landseer’s Monarch of the Glen, a bottle of air that re-creates the smell of the old Glasgow Docks - each of which inspire moments of reflection, joy, drama and laughter.

What listeners say about Made in Scotland

Great story, but that’s it

Great story but found the narrator terribly boring to listen to, so boring that I never managed to finish the book.

Greatly enjoyed it! Gordon Kennedy has a voice that makes you able to listen with ease and not get distracted. Reading about Connolly's life was do interesting and at times a little heartbreaking, mixed in with comedy.

Disappointed that Bilky did not read...but... by Chapter 4 he lost me. Narrator should have come up with second voice. A ten minute conversation saying John Me John Me sooooo annoying.

I can't believe I wasted a credit on this blather.

I actually read the other reviews before I bought this book. I guess I miss the point. Mindless and boring. The narrator was decent, but the story is just not entertaining. And again, the author has to sprinkle his pointless political leanings throughout. Can't these dopes just write for entertainment and leave the political editorials to the professional hacks?

A great telling of Billy's story. The narrator was chosen wisely and was reminiscent of Billy.

this wasn't it, for me.
I was 54 minutes in, and still not completely sucked into the story. I'm not sure whether Mr. Connolly did the writing himself or had help?
I needed a stronger beginning/story to have me driven to know the rest of the story
Disappointed.
Michael Caine's book "blowing the bloody doors off" is a book that hooked me right off.

Not what I expected from the sample. Disappointed

Billy Connelly starts this book off by saying he is going to rant and complain. the sample lead me to believe this would be true but that was just the preface. The little i did listen to was a lot of whinging about his childhood teachers and family. And, yes he has a true right to be bitter--it was awful. But I still wish I had checked it out from the library so I could return it. wasted a credit for a book not worth keeping.

A very touching, earthy and upbeat memoir. Great view of aging and honoring memories. Connolly's story-telling is superb; the genius of making the listener laugh and cry and sigh and laugh again! I only wish it was longer.

I didn’t want to stop listening! Highly entertaining and perfect choice of narrator. Looking forward to listening to another book by Billy Connolly!

Made me want to take the next plane to Scotland!

I loved every minute of this! The writing, the performance, the reverence for the same things that I hold dear. I particularly loved the bit about bagpipes, as I have always loved bagpipes.

Thoroughly enjoyed this book. Always enjoyed Billy's shows and was interesting to learn more about him.

I felt a part of his history. it was touching and funny. thank you for sharing.

Very interesting autobiography (although I réalise autobiography is not my favorite genre...) By the end I had got over my disappointment that it was not read by billy. A lot of what I enjoy about his humour is the way he says things - Gordon Kennedy has a nice voice but it is not Billy...