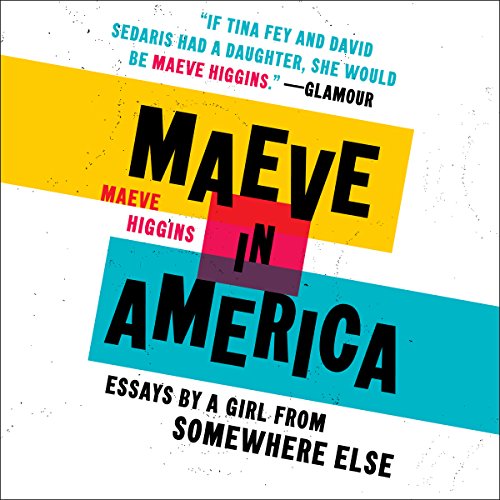 “If Tina Fey and David Sedaris had a daughter, she would be Maeve Higgins.” (Glamour)

A startlingly hilarious essay collection about one woman’s messy path to finding her footing in New York City, from breakout comedy star and podcaster Maeve Higgins

Maeve Higgins was a best-selling author and comedian in her native Ireland when, at the grand old age of 31, she left the only home she’d ever known in search of something more and found herself in New York City. Together, the essays in Maeve in America create a smart, funny, and revealing portrait of a woman who aims for the stars but sometimes hits the ceiling and the inimitable city that helped make her who she is.

Here are stories of not being able to afford a dress for the ball, of learning to live with yourself while you’re still figuring out how to love yourself, of the true significance of realizing what sort of shelter dog you would be. Self-aware and laugh-out-loud funny, this collection is also a fearless exploration of the awkward questions in life, such as: Is clapping too loudly at a gig a good enough reason to break up with somebody? Is it ever really possible to leave home?

“Maeve Higgins is hilarious, poignant, conversational, and my favorite Irish import since U2. You’re in for a treat.” (Phoebe Robinson)

“Maeve Higgins is the funniest writer I know. And Maeve in America is just so smart and joyful. I especially like it when she’s unhappy. Because she’s very funny about it. Always be unhappy, Maeve!” (Jon Ronson, author of So You’ve Been Publicly Shamed)

What listeners say about Maeve in America

True life stories read in a lilting Irish accent? Yes please! I very much enjoyed listening to this book, partially because I thought I could hear Maeve smiling sometimes. The first story about swimming with dolphins is hilarious, as is her adventure with Renting the Runway. Other essays are more serious and poignant, but she finds a way to weave in her gentle humor. Really a pleasure.

Loved this book. Funny but also wise and compassionate. Recommended to friends and family. Will revisit, for sure.

The essays morphed from humor to politics. If I wanted political essays, I’d have looked for that.

I love Maeve on Wait Wait Don't Tell Me. such a treat to hear her read her essays.

I'm so glad I chose to listen to this book—the author is simply delightful in her comedic delivery and reading of her words. I was constantly giggling as I listened and walked to/from work. Well done!

What we all should know:

The immigrant experience all over the world and throughout time has been a crisis in the lives of the people experiencing it. Nowadays in America it’s become a matter of concern and fear on the part of American citizens. If “comedy is the politeness of despair” then this collection of essays is an enlightening and gentle nudge towards peace and friendly understanding.

awesome! enjoyed this so much.

What a funny and intensely thoughtful set of essays. I loved them so much! She has a very pleasant reading voice as well. Five stars!

It's nice to hear a different voice coming from a different perspective tackling new issues. The more personal the stories the more entertaining it was to listen, and by the same token, the more general the topics the somewhat less interesting to hear. The author is clearly talented, insightful and intelligent, so it would be interesting to read a purely humorous offering and then separate from that a strictly analytical one. Combining the two, as was attempted here, was not always ideal.

Was looking for something light hearted and funny....this was just too much negativity for me. Cant get through it all.

Maeve uses poetic words to talk about such diverse topics as post-Trump immigration, dog walking, teaching comedy in a war zone, and Instagram. I loved her voice, both on the page, and as she read the essays.