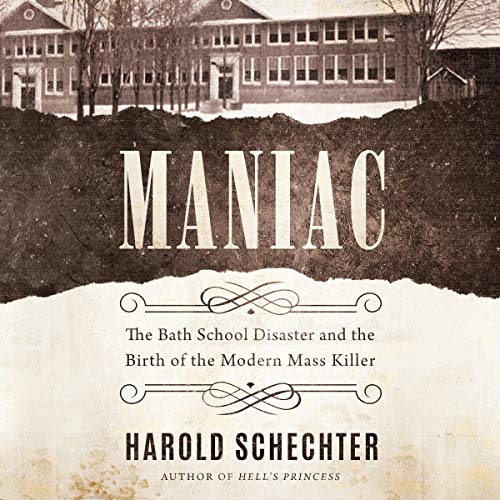 Written by: Harold Schechter
Narrated by: Braden Wright
Try for $0.00

Harold Schechter, Amazon Charts bestselling author of Hell’s Princess, unearths a nearly forgotten true crime of obsession and revenge, and one of the first - and worst - mass murders in American history.

In 1927, while the majority of the township of Bath, Michigan, was celebrating a new primary school - one of the most modern in the Midwest - Andrew P. Kehoe had other plans. The local farmer and school board treasurer was educated, respected, and an accommodating neighbor and friend. But behind his ordinary demeanor was a narcissistic sadist seething with rage, resentment, and paranoia. On May 18 he detonated a set of rigged explosives with the sole purpose of destroying the school and everyone in it. Thirty-eight children and six adults were murdered that morning, culminating in the deadliest school massacre in US history.

Maniac is Harold Schechter’s gripping, definitive, exhaustively researched chronicle of a town forced to comprehend unprecedented carnage and the triggering of a “human time bomb” whose act of apocalyptic violence would foreshadow the terrors of the current age.

What listeners say about Maniac

One of my favorite true crime authors flops.

Narration was fine. Most of the book isn't about Bath School Bombing or Andrew Kehoe. I wanted to learn more about the attack on my hometown 94 years ago. This book was highly anticipated by me because I love Harold Schechter's books. This book, however, mentions the bombing in from the "big stories that happened shortly after the attack helped to wipe this incident from memory due to short coverage", then Schechter proceeds to do the same thing as he goes into short detail about the people involved and the bombing itself, and then proceeds to go into massive detail about completely unrelated events. I had to shut it off after a while because this book really irritated me. I understand that it can be hard to get the gritty details on a story like this and be able to narrate them as fact, but he could have absolutely done better. This book does not do my hometown, nor any of the families who were affected, any justice. Just another instance like so often seems to happen, where the Bath School Bombing is simply overlooked and forgotten.

A Lot of Wasted Time

As a Michigan native, I'm quite familiar with the Bath School Massacre and had high hopes for this book. What a disappointment! Andrew Kehoe is scarcely mentioned in the first hour as the listener is led down a rabbit hole of discussions focused on local geology and early settlers to the area. The middle of the book also gets bogged down by a very lengthy monologue regarding the achievements of Charles Lindbergh. Fascinating in its way but totally unnecessary. Andrew Kehoe was a peculiarly twisted individual and I wish the author had devoted more energy into delving into his life, his actions that horrific day, the survivor's stories and the disaster aftermath. Others have done so and there is more than enough material to fill a book. All the extraneous padding was unnecessary, and honestly, quite boring.

Harold Schechter at his best

Absolutely brilliant. Narration was stellar as was the story itself. Pick up this audiobook now.

Such a sad devastating, yet unfortunately, little known story.
Maniac, I would say is very good, but more of a companion reading for those interested in the story.

Apparently there must be little information about this tragedy because the author filled the book with unrelated information from practically every American mass-casualty event of the twentieth century: Tim McVeigh, Columbine, Richard Speck, Charles Whitman and a particularly long -winded account about Charles Lindberg. Just frustrating!

Harolds work is as always exemplary. The narrator is wonderful as well. Looking forward to the next one

As a resident of Michigan, I had only a vague knowledge of this event. The book covered every detail of this event to a satisfying conclusion.

Gripping story of America's first & LARGEST attack of a school killing scores od students and staff a century ago, followed by a chapter of its footnotes in history and media vs later attacks through to Sandy Hook.

3/4 of the book is about headlining news that has nothing to to with the Bath massacre.