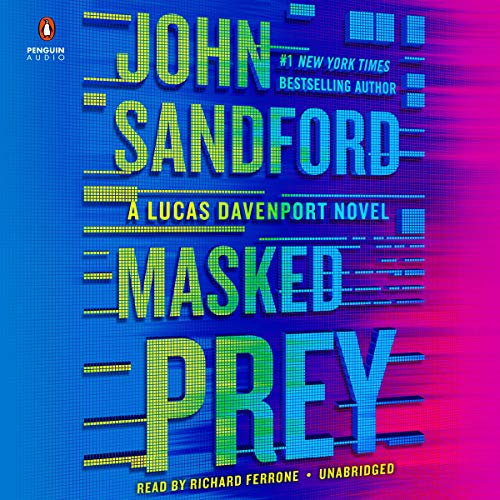 Written by: John Sandford
Narrated by: Richard Ferrone
Try for $0.00

Lucas Davenport investigates a vitriolic blog that seems to be targeting the children of US politicians in the latest thriller by number one New York Times best-selling author John Sandford.

The daughter of a US Senator is monitoring her social media presence when she finds a picture of herself on a strange blog. And there are other pictures...of the children of other influential Washington politicians, walking or standing outside their schools, each identified by name. Surrounding the photos are texts of vicious political rants from a motley variety of radical groups.

It's obviously alarming - is there an unstable extremist tracking the loved ones of powerful politicians with deadly intent? But when the FBI is called in, there isn't much the feds can do. The anonymous photographer can't be pinned down to one location or IP address, and more importantly, at least to the paper-processing bureaucrats, no crime has actually been committed. With nowhere else to turn, influential Senators decide to call in someone who can operate outside the FBI's constraints: Lucas Davenport.

"Addictive...Sandford always delivers rousing action scenes, but this time he's especially good on character, too....There’s enough violence to satisfy bloodthirsty tastes, enough information on neofascism to give us a chill, and enough sly humor to make American teenagers and their would-be killers sound as if English were their second language.” (Marilyn Stasio, The New York Times Book Review)

"This entry in the phenomenally popular Prey series will engage longtime fans with its intricate plot and have new readers backtracking through the entire series. Thoroughly involving and very timely." (Booklist)

What listeners say about Masked Prey

I'm a big fan of Sandford, and the Davenport books normally, but this one really disappointed.
one basic plot line essentially not much happens.

Enjoyed it, not my favorite

I really enjoyed the book but didn't like the ending. Also, a bit too much interviews through the course of the book.
I still enjoyed it.

Never a disappointment when it comes to a Prey novel. I highly recommend this book.

I MUST return this political dribble-drabble book

I preordered this book because I am a big fan of the Lucas Davenport series. Big mistake - this was not a good book at all The format and story is predictable, and old. The worst part was the political see saw that Sandford was teetering on. He threw in anti-conservatives and sort of pro-conservatives: pro-liberals and sort of anti-liberal.s themes. He went from one extreme political viewpoint to the extreme side of other political viewpoints. l guess he was trying to please everyone, but what he really did, in my opinion. was make everyone angry. It is hard enough to listen to nonstop media that causes much political angst in our daily lives. It is nice to escape all of this with entertaining books - not more preaching, virtue signaling and political crap such as Masked Prey. And by the way, I did not find the ending very good at all. Not all the bad actors, such as a selfish fame seeker, received the punishment deserved That left me unsettled too. I used to love the song, Down to the River to Pray, but now I don't like it.

Come on Sandford, go back to good exciting stories rather than this political dribble drabble. Let Sandford be a cop again rather than a political tool. I will add that the narrator is excellent, as usual, but he was stuck with this very predictable and aggravating book. Sorry Richard Ferrone. You deserve better.

Made it to chapter 6 and gave up. I own every one of the Prey series and have listened to each one multiple times. This effort is not worthy of the author. Will be returning.

Devoid of Suspense and Embarrassingly Bad

This is easily one of the worst books John Sandford has written. He should be embarrassed. The plot is telegraphed very early on and doesn’t deviate until the inevitable conclusion. And then he throws in his political beliefs to bore us with for most of the story. Oh and then there’s several instances of a character talking to someone who is dead and keeps appearing with annoying frequency. Didn’t he already use that device in another, better book? I’m not sure what is going on with Sandford, but I certainly won’t be wasting any more time on buying his new books. I’ll just listen to my old favorites again.

This one didn’t do it for me

This is the only Sandford book I didn’t absolutely love. I have read every book the man has ever written. Flowers, Kidd & Davenport. I couldn’t wait for this one to be released.
I didn’t care about any of the characters in this book. Usually, you can get into the bad guy’s, gal’s head and actually care about them because you sort of know what makes them tick even if you don’t like them. Dunn’s character was not developed at all. Also, it had none of the usual tongue in cheek humor that Davenport usually offers. Maybe Sanford is trying to be too current.
I miss his old characters like Shrake & Jenkins and Del Capslock. The two Marshals just don’t have the same character and humor. I know Flowers has his own series but it was good to have him inserted in a Davenport book occasionally. I know authors are probably like rock stars who want to play new music and not stick with old hits . I think Sanford could write a more modern story and keep some of his old magic. Sorry John, sadly this one didn’t do it for me.
Richard Ferrone was excellent as usual!

I just can’t finish this

I’ve read every book in this series, but I just cannot handle this one. It’s too close to what we are living every day. Sorry.

Not his best, but not bad

MASKED PREY is an excellent novel despite what some of the reviews at Audible and Amazon say. It's just not as good as many of John Sandford novels.

Just starting this book from an author I've loved in the past. Not sure i'm going to make it to chapter 3. I don't need political bias in my fiction reads. Why do so many of these authors feel the need to signal their "wokeness" in their books. First steven king now may others are following suit. Returning with great sadness and disappointment.

I have read/ listened to most of the Sandford/Davenport books, this one is sub par. Dissatisfied.

I really liked John Sanford's early with Lucas Davenport. Now he really is reaching, this will be my last purchase.