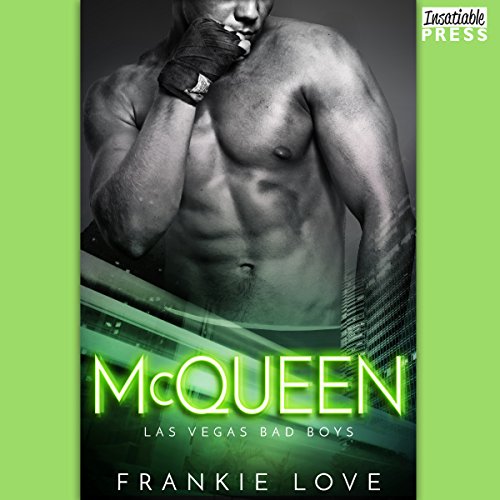 Some people judge me because I strip for a living, but I don't give a shit about those assholes. I play hard but f - k harder. And no woman is going to change that. When I meet JoJo, I expect a one-night stand, but a revealing photograph pushes us together, and now she needs me to be more than that. For JoJo, I can be more than a stripper - I can be her man. Except I know she's hiding something...and I can't protect her if I don't know her secrets.

I have two priorities: fighting and family. According to my mob boss father, women are commodities. The only ring I should be interested in is the one on my finger. That's why he's arranged my marriage. Time is running out: I have only four weeks to live my life on my own terms. So when McQueen shows up the gym, I give in to what we both want. But what starts as a no-strings-attached afternoon quickly becomes a fight for my life. If I tell McQueen the truth, my life as I know it will be over...and so will his.

Warning: McQueen features an alpha male with a desperate need to protect his woman. It's sexy as hell. You might need a cool bath after. Just sayin'.

Great Story ~ Well Worth The Price!


McQueen and Jojo's relationship may have started out as a one and done rump, but no other woman has gotten under McQueen's skin like Jojo. She's a strong heroine who's tuff, devoted to her family, but lives a double life. She inspires to be a professional fighter, and trains hard, but doesn't let her family know. When her father, the boss over the local Irish mafia, arranges for her to be married to form an alliances with another mafia, she starts thinking she may never be able to realize her dreams. She runs into McQueen while training at the gym. He is known as a player, and for his one and done mentality, but there is an instant attraction, chemistry, and heat between them. True to McQueen's style, he comes onto Jojo, and she's ready to throw caution to the wind, after all their one time arrangement is just perfect for her. Normally, McQueen doesn't do repeats. He doesn't like the complications that come from being with the same woman twice, but Jojo stirs something in him. When the opportunity rises for him to be with Jojo again, he makes no bones about pursuing her.

McQueen isn't the only person who's interested in Jojo. Someone starts stalking her, and leaving intimate pictures of her and McQueen. If having a stalker wasn't bad enough for Jojo, she has to deal with her father, and brothers. Being with McQueen gives her the strength to stand up to her family, but when the stalker closes in on Jojo, McQueen maybe the only one who can save her.

This audio had a great mix of suspense, heat and plot twists. I'm looking forward to the next story in the series. While this is book three in the series, it can be read as a stand alone.

Stripper Bad Boy Gets Knocked Out By Tough Girl

McQueen, the ultimate hit it and quit bad boy, gets one taste of the petite little fighter and he can't get enough of her. This was a good story and there's always the Vegas mafia hanging around to add extra tension. Jojo the perfect match for McQueen because although she was a virgin, she is not naive or insecure. My only problem is that McQueen is unhappy that his friend don't think he's capable of managing the club, yet he does nothing to prove them wrong and that angle didn't get explored more deeply. And although McQueen fell for Jojo and showed that he is not self-centered, he still didn't show much depth to his personality -- still pretty shallow. Even so this was still my favorite in the series so far. Each book gets better than the last. I really like Frankie's style of writing.

The narrators were amazing, I just wish they would do a duet style narration for a better listen. Joe and Maxine work well together and their voices complement each other.

Absolutely worth every cent I paid. Can't wait for the last book in the series.

This audiobook is part of a series and while it can be listened to as a standalone it's more enjoyable if you listen in order, as many characters cross over in each book. This was a sexy love story, with Irish mafia complications on the heroines side. The characters are very well written and I had a hard time stopping at bedtime! Narration was perfection, with two of the best narrators in the business who really bring the characters to life. Great book!

I love me some McQueen!!! How can you not fall in love with a stripper bad boy? Just saying....JoJo showed him that tough girls know how to win hearts even when they're not trying. Throw in a stalker & a Mafia boss and your set for a romance that may never happen. I have to say I think this is my favorite of the series so far. It's definitely worth the credit!!!!

Ryan McQueen is the third Las Vegas bad boy to meet his one. Jo Jo (Josephine ) is the daughter of Irish mafia...mother has died, three older brothers, older sister and over protective dominating but loving father. This story ties in with aspects of the first book about Ace and Emme. We once more get to spend some time with the entire gang if bad boys and their loves.
McQueen meets JoJo at a gym where she is training to be an MMA fighter..yet she is also a contrast of a nurturing and soft and reserved woman.
They have an encounter and like Ace and Landon before him, the more than one woman at a time stripper falls in love and shows his loyalty and faithfulness. Surprisingly his stripping isn’t a problem for JoJo...they fit together so well.. You can’t help but love these men and their women.
There are open story lines that i cannot wait to see resolved and find out what happens with the last bad boy Jack. And yet it isn’t a cliffhanger.
This author is writing hit and yet romantic stories with people with wild and different lives and yet they are so close and loving and supportive if each other. Think I’ll miss them when the series is done,
These are two of the best narrators putting emotion, pacing and interest in the story...they are both incredibly talented and really make these stories special! Worth the money or a credit I’ll listen to this series again and again I’m positive.

The first book in the series is pretty good. The second book in the series is not quite as good but OK. The third installment is just really juvenile. I'm not sure what has happened to her writing from the first one until now but it feels like a high schooler is writing the story. Very disappointing. I Skipped through most of the book just to get to the end.

This is book 3 of the Las Vegas Boys, and my favorite so far. Hot male stripper McQueen meets tough fighting JoJo. At least she's tough in the ring but her mafia father still runs his family the old fashion way which causes her to be obedient, loyal & quiet at home.JoJo & McQueen bring out the best in hot & steamy. Yes, instalove as these Las Vegas boys tend to do but well worth it. I like how there isn't too much over the top drama to drag on. It gets resolved quickly. I can't wait for Jack's book (#4) in July. So glad I bought during sale. Still would've been worth a credit.