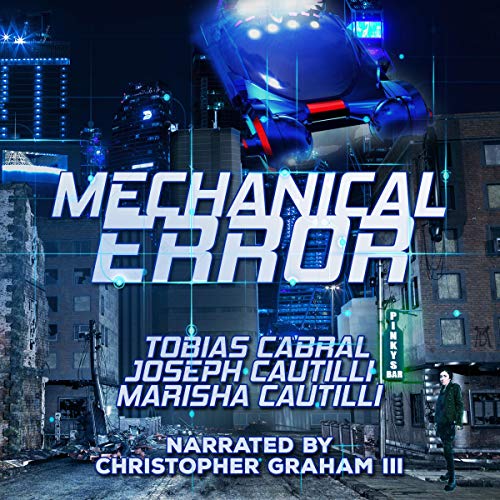 Mechanical Error is a thrilling, introspective post-cyberpunk detective story set in a sprawling, dystopian near future.

A string of bizarre murders across New Cyber City. For Earth Corps Agent Charlotte McCain, that should have been just another day at the office. But this case felt different. It wasn't just people inexplicably exploding; weird was her business. This one was hitting nerves she'd worked hard to numb. That irritated her almost as much as partnering up with brilliant but troubled Agent Tom Murdoch to solve the mystery before more victims went up in flames.

Meanwhile, a rogue android with a dark history took to the stage, delighting audiences, who never guessed the terrifying mission he pursued in the shadows beyond the spotlight....

Also included: Blank Check, a Cyberpunk novelette that follows eccentric genius John Rutledge on a tropical adventure for which he never asked.

I was not sure what to expect when I started listening, but the story pulled me in quickly. A wonderful mix of SciFi, mystery and intrigue, wrapping up with a mix of psychology and social behavior. The emotions and feeling portrayed could easily be transposed upon many people today. making you stop and think about your responses and actions toward others. Nicely done!

Cyberpunk detective story for those that have wondered what would happen if androids were real and became able to think for themselves.

People are exploding (yes, you read that right!) and Earth Corps agents Charlotte McCain and Tom Murdoch are tasked with solving these bizarre murders. When the truth comes out, will anyone actually believe it?

There is also a Cyberpunk novelette "Blank Check" which follows the story of genius John Rutledge on a vacation in Costa Rica. He thinks that he has escaped his problems, but can you ever really escape?

Both stories are wonderfully written with great characters and great world building. The narrator, Christopher Graham II, adds a lot to the book. I will admit that the first part of the book had me a little confused until I figured out what was happening, but that didn't detract from the book.

I was given the opportunity to listen to the Audible version of this book by the authors and chose to review it.

Fun Futuristic Ride! I love detective stories and I also love sci-fi, which makes this story the perfect combination! Lots of fun! I was given a free copy for my unbiased review.

I received this audio book for free in exchange for my honest review. Both the writing and narration in these 2 futuristic tales is impeccable. Very entertaining.

This book was engaging right from the start. I look forward to more books from this author.

If Dragnet and science fiction had a baby.

Set in a mechanized future where the discussion of what counts as conciousness is on the nation's mind a grisly string of murders drag embittered officers slogging through a quagmire of corporate greed and societal prejudice.

A good read and a good listen. If you like a slightly harder sci-fi then this should be the next book for you.

Mechanical Error was beautifully written and narrated. The authors spun a fascinating yarn that was both excitingly colorful and discomfortingly grey. I was drawn into the story almost instantly and was left wanting more of this cyberpunk rendition of Philadelphia and all the various human and android characters.

And the bonus novelette was fun as well.

I wasn't a fan

Let me start by saying that I asked for a free code to listen to this audiobook all because Roma Gray was involved. I’m a big fan of her.

Needless to say, I wasn’t really a fan of these two stories. I liked the second one more than the first one though. With the first story, it's like I was too stupid to understand what was going on, especially with some of the terminology used. I had a basic understanding of what was going on, thankfully, but I never felt connected to any of the characters or the story itself. Story two was easier to follow, but I felt it ended…when it shouldn’t have ended. It’s like the story is going, the characters are rescued and suddenly it’s done. It was just strange to me.

The narrator did an alright job. Unfortunately, there was this echoing quality to the narration, like he was sitting in a little box and his voice was bouncing off the walls, while other times, it sounded like he was talking through an intercom. Additionally, there were times when it was obvious he’d taken a break and was “getting back to work,” meaning he would be further away or closer to the microphone then he’d previously been. Other than the sound quality of the narration, he did pretty well with the character voices.

In story one, I wasn’t sure what the purpose of the androids was. It’s like some of them were with people an in dates, but then there was Bobblepop(?) who would go on stage and read poetry or some other literature. If it was hard for Charlotte to believe one of them might have a sense of their self, and instead thought Bobblepop was just malfunctioning, what was the point of them? If humans just wanted companionship or something else along those lines, why would there be those “on stage?”

In story two, what was with John keeping a razor blade in his cheek? I was lost there. Also, why did John not question Katherine’s fighting skills when she was a lab person like him?